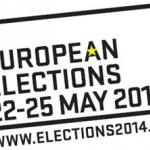 At the beginning of November the European Parliament published an election forecast based on national election results and surveys, which took into account the quite different electoral systems in the 28 EU member states.  These are the trends predicted: [1]

The study quoted is highly interesting due to its complex and reliable methodology. However, we are sceptical of election forecasts as they may simply project the transient status quo of any given political point in time onto the future, when social and political circumstances may be very different. We think this is especially true of the current crisis-prone and unstable situation in Europe.

In what follows we will provide an overview of the basic features of the political landscape before the elections, with special reference to left parties. The trend in voter turnout is of fundamental significance for the political aspect of the crisis of European integration.

The European People's Party (EPP) is currently the strongest faction (275 seats), followed by the Progressive Alliance of Socialists and Democrats (S&D - 194 seats), the Alliance of Liberals and Democrats for Europe (ALDE - 85 seats), The Greens - European Free Alliance (Verts/ALE - 58 seats), the faction of the European Conservatives and Reformists (ECR - 56 seats), led by the British and Czech conservatives, and the Europe of Freedom and Democracy (EFD - 32 seats), which mainly brings together nationalists and right-wing populists. 31 MEPs - among them 3 MEPs of the Hungarian neo-Nazi party Jobbik - are non-attached members (NI).

The European United Left/Nordic Green Left (GUE/NGL), which includes the MEPs of the Party of the European Left (EL), holds 35 seats. [4]


The conservative bloc torn on the question of integration

From 1999 to 2009, the EPP was in a European Parliament faction together with the European Democrats. One of the consequences of the financial and economic crisis reaching Europe in 2008 was the split of the conservative EU-sceptical parties from the European People's Party. They formed the ECR in 2009. Despite this attrition the EPP remained a broad and heterogeneous party with members ranging from Viktor Orbán's Fidesz (Hungary) to the French UMP, Berlusconi's Popolo della Libertà and Fredrik Rheinfeldt's Swedish Moderate Party.

There is still no pan-European general proportional suffrage. This affects the allocation of seats in the Parliament, which does not exactly reflect the distribution of votes actually cast for the various parties allied in factions. It is thus very instructive to look at the ratio of votes actually allocated to the factions. It shows that the votes given to parties (or factions respectively) have different weights. The four biggest factions in the EP (EPP, S&D, ALDE and Greens/EFA) won 70 % of the votes, but 80 % of the seats.

Factions in the European Parliament EU-wide, weighted by eligible voters of each EU state see Graph 3 below

The enlargements of the European Union (2004, 2007, 2013) did not merely increase the number of EU-inhabitants up to half a billion people but also changed its political landscape. Indeed European integration leads to a reciprocal political influence and an adjustment of political culture; however, the process is long and inconsistent. This can be deduced from the differing election results when comparing the states of the EU-15 [5] and the EU-13 [6].

Factions in the European Parliament, weighted by eligible voters of each state - EU 15 see Graph 4 below

Factions in the European Parliament, weighted by eligible voters of each state - EU 13 (including Croatia) see Graph 5 below


A faction for the far right?

The plans to form a faction after the EP elections in 2014 have become more concrete. France's Front National and the Austrian Freedom Party (FPÖ) will probablygain votes and seats. Belgium's Vlaams Belang is represented by a non-attached MEP, the Sweden Democrats are likely to win seats in the European Parliament. All of them are members of the European party European Alliance for Freedom (EAF). Talks with Geert Wilders of the Dutch Party for Freedom (PVV - four non-attached MEPs) and the Lega Nord (six MEPs in the EFD faction) are under way.

As faction status requires a minimum of 25 MEPs from at least seven countries, the inclusion of the Slovak National Party (Slovenská Národná Strana - SNS) - which won 5.56 % and thus one seats in the last elections - is of strategic importance. The SNS won 4.55 % in the parliamentary elections of 2012 and is on the rise. Apparently, there will be no agreement with the British Independence Party (UKIP). A collaboration with the openly neo-Nazi parties (Jobbik, Golden Dawn, Germany's National Democratic Party, British National Party) has been rejected.

The following summary of relevant election results illustrates the prospects for the far and populist right: 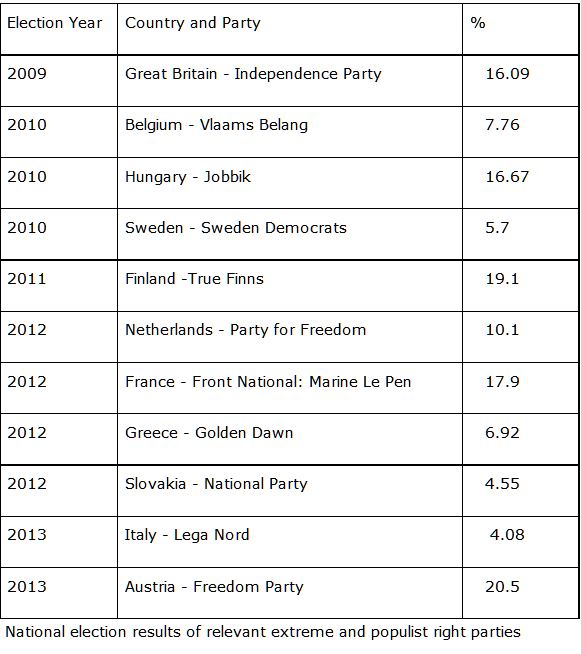 As the parties to the left of the social democrats and the Greens, despite all the transformations they have undergone, represent an historic continuity of emancipatory struggles and political organisation, their long-term perspective is important.

Average vote for the left by decades 1980 - 2012, significant8 party results only and weighted by eligible voters see Graph 6 below [9]

We believe that the strength of these left parties is still primarily defined by their influence in their nation-states. 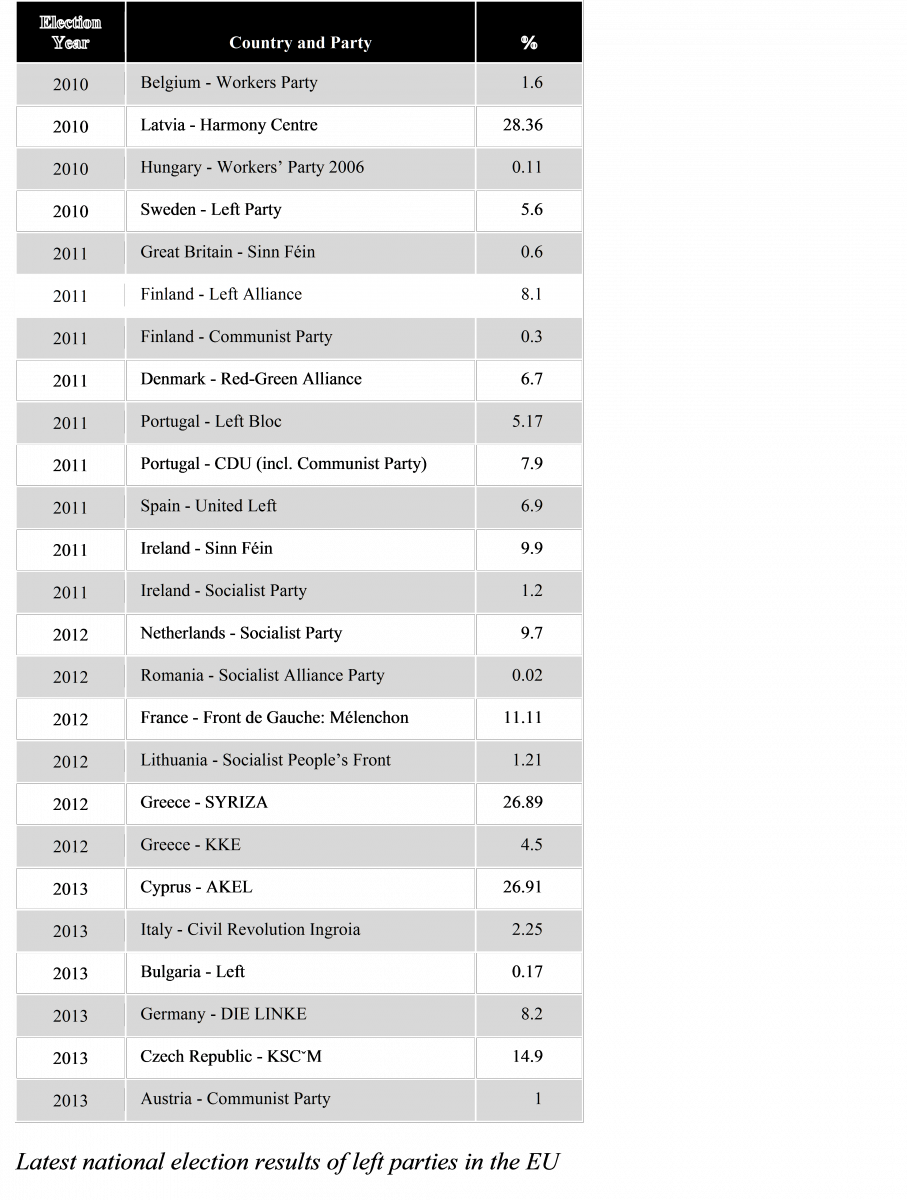 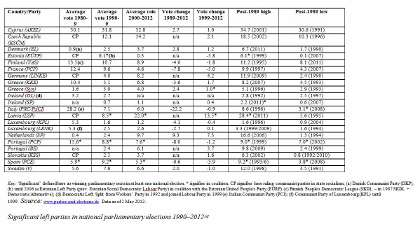 We will conclude with the results the left obtained in the 2009 European Parliament elections.

In total, 9,771,196 people in the EU voted for a left party. Member and observer parties of the EL (as well as alliances with the participation of EL parties) received 7,024,424 votes in the whole EU.

It is interesting that almost a fifth of the EL's 7,024,424 votes were cast for parties or alliances which did not win seats in the EP. Some 1,037,826 votes were cast for the electoral alliance Anticapitalist List of Italy's Rifondazione Comunista and the Party of Italian Communists. The electoral alliance Left Ecology Freedom (SEL) in Italy won 957,822 votes and likewise did not enter the EP.

The Communist Party of Bohemia and Moravia received 334,577 votes.

Also from this perspective, the expansion of the network and the influence of the EL in Central and Eastern Europe prove to be a key strategic issue. There is much to indicate that the upcoming elections for the European Parliament will be characterised by an increased polarisation. The chance exists that the left of the Left will be able to assert itself in these conflicts and thus increase its political weight. Yet, if and to which extent this chance can be realized will remain an open question until election day. 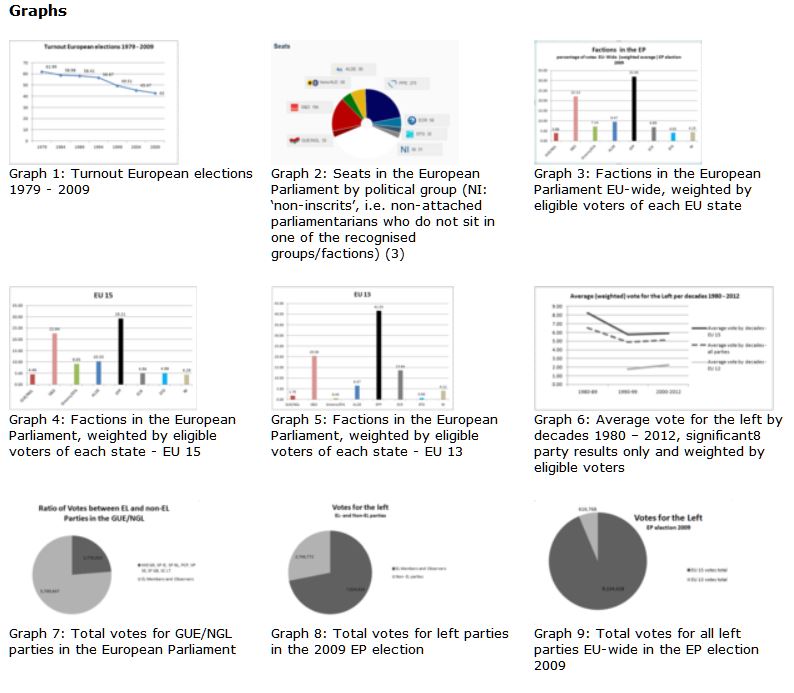 [Barbara Steiner is a political scientist based in Vienna, a member of Transform.at and is working in the transform! europe coordination office.
Anna Striethorst is a PhD student in political sciences and a former associate researcher in the Brussels Office of the Rosa Luxemburg Foundation.
Walter Baier is an economist in Vienna and Coordinator of the network transform! europe.]