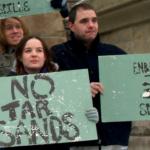 One of the most divisive issues in Kitimat, B.C., in a generation came to a head Saturday night as residents voted 'no' against Enbridge's Northern Gateway pipeline project.

"The people have spoken. That’s what we wanted — it’s a democratic process,” said Mayor Joanne Monaghan in a statement on Sunday. “We’ll be talking about this Monday night at Council, and then we’ll go from there with whatever Council decides.”

More than 900 residents voted in advance polls on a question that has split the community.

"Neighbours won’t talk to neighbours," one local resident told CBC News, "and this is not going to go away for a long time."

But according to others, neighbours were discussing the issue.

'What happened in Kitimat was the result of neighbours taking back their power by talking to each other about what’s important to their community, one doorstep at a time,” said Celine Trojand, Director of Organizing at Dogwood Initiative, one of several groups protesting the project.

Kitimat is the community most affected by the $6.5-billion project, because as the endpoint for the pipeline bringing bitumen from Alberta, it would house a marine terminal where the supertankers would load up. The large ships would sail down the narrow Douglas Channel taking the Alberta crude to new markets in Asia.

City council, which has so far tried to remain neutral, initiated the plebiscite to take the pulse of the community and has said the town's decision will influence its support for the project.

However, the plebiscite isn’t binding on the federal review panel, which has until June to decide if the Northern Gateway project proceeds.Despite this, critics say Enbridge has raised the stakes by going on a spending spree with lots of advertising and open houses, prompting complaints the company is trying to buy votes.

"The people in Kitimat just feel that this proposal is associated with way too many risks," he told CBC News.

However, Enbridge's Katherine Coutinho points out the project brings jobs and money to the town.

"It’s 188 families that will be impacted by these jobs and as I’ve said $5 million a year in property taxes is significant for local priorities and I think people see the value in that," she said.

Observers, like Michael Moore with the University of Calgary's School of Public Policy, say the vote is especially important for Enbridge.

"They need a marker that’s on their side," says Moore. "They’ve certainly taken a lot of hits in the media and in the public arena, so they need something that says we really are respecting the rights of the people."

Those working to get the pipeline through say they haven't given up.

"Over the coming weeks and months we will continue to reach out and listen to our neighbours and friends so that Northern Gateway can build a lasting legacy for the people of our community," aid Donny van Dyk, Northern Gateway's Kitimat-based Manager of Coastal Aboriginal and Community Relations.

One group Enbridge has not been able to convince so far is the local Haisla First Nation. Dozens surprised Kitimat’s mayor by wearing 'No Enbridge'  T-shirts to one of her events.

However, most of them don’t live in the town and can’t vote in the plebiscite.