Cyrus Vance: Why Jail Bankers When You Can Jail Bank Protestors? 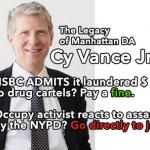 Yesterday, Occupy Wall Street activist Cecily McMillan was found guilty of felony assault of a police officer, and was immediately sent to jail on Rikers Island to await sentencing. The 25-year old grad student was not offered bail. She faces seven years in prison.

McMillan’s defense team has long argued that McMillan was first assaulted by the arresting officer, and later beaten. And the incident did not happen in a vacuum, but in a melee of a violent police crackdown in Zuccotti Park during a celebration of Occupy’s six-month anniversary (#M17).

McMillian’s arrest (via Sparrow Media). Behind McMillan in the first image is Shawn, who received a $82,000 settlement from the City over violent beatings, including the one that occurred this night. "McMillan was one of roughly 70 protesters arrested on March 17, 2012. She and hundreds of other activists, along with journalists like me, had gathered in Zuccotti Park to mark the six-month anniversary of the start of Occupy Wall Street…When the police moved in to the park that night, in formation and with batons, to arrest a massive number of nonviolent protesters, the chaos was terrifying. "Bovell claimed that McMillan elbowed him in the face as he attempted to arrest her, and McMillan and her defense team claim that Bovell grabbed her right breast from behind, causing her to instinctively react."

McMillan presented photographic evidence in the trial of a bruise to her right breast from the night of the arrest. The prosecution argued this was self-inflicted. Assistant District Attorney Erin Choi said and that McMillan was lying about Officer Bovell groping her for the sake of publicity.  During his testimony, Office Bovell “said multiple times under oath that the wrong eye was injured. Bovell could not answer why he spoke about an injury to his right eye, rather than his left.”

This is a case that has taken two years of resources. But Manhattan District Attorney Cyrus R. Vance Jr.  "would not agree to let her plead guilty to a misdemeanor,” instead insisting on a felony even if McMillan plead guilty.

How does Cy Vance treat other crimes? Crimes like money laundering for drug cartels? It turns out, there is a whole different standard for Cy Vance when it comes to white collar crime. Cy Vance, together with the Department of Justice, found after a two-year investigation that HSBC laundered “hundreds of millions of dollars through the U.S. on behalf of Mexican and Colombian drug cartels.”

HSBC settled for $375 million. Not a single HSBC employee spent a day in jail.

As detailed by Matt Taibbi’s in his new book, “The Divide,” Vance “sent subpoenas to many Wall Street firms, but chose to indict only a small, globally non-consequential Chinatown bank [called Abacus]”

Cy Vance does like making an example out of defendants. As Taibbi told Amy Goodman on Democracy Now!, when announcing the prosecution of Abacus executives:

"[Cy Vance Jr.] actually had a chain gang, where they chained 19 of the defendants together and hauled them into court for this—for this exercise.

AMY GOODMAN: All working for Abacus?

MATT TAIBBI: All working for Abacus. And these are working-class Chinese immigrants, basically. The highest-ranking official in this entire case made $90,000 a year. Many of them didn’t speak English. This is a small bank wedged between two noodle shops in Chinatown. “

And now, Cy Vance is waging a war on behalf of Goldman Sachs.

Sergey Aleynikov is a former programmer for Goldman Sachs who was charged with stealing code from Goldman Sachs. Aleynikov was pursued by federal authorities for this crime. Goldman Sachs should be able to fight its own legal battle against a former employee without the government intervening—but Goldman, it seems, wanted Aleynikov in prison. The U.S. Attorney’s office in Manhattan and the Department of Justice obliged. He was found guilty in 2010 but an appeals court overturned the verdict, “ruling that prosecutors misapplied the federal corporate espionage laws against him.”

But now, Cy Vance has charged Aleynikov. With state crimes.

Manhattan DA Cy Vance Jr. is set to leave behind quite a legacy. Protestors, small-time banks, and ex-Goldman employees that anger the mothership will face the uncompromising force of the law. But if you’re a big bank that laundered hundreds of millions in drug money? Cy Vance Jr and the Manhattan DA’s office has got your back.