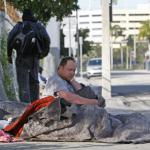 Late last week, the Central Florida Commission on Homelessness released a new study showing that, when accounting for a variety of public expenses, Florida residents pay $31,065 per chronically homeless person every year they live on the streets.

The study, conducted by Creative Housing Solutions, an Oklahoma-based consultant group, tracked public expenses accrued by 107 chronically homeless individuals in central Florida. These ranged from criminalization and incarceration costs to medical treatment and emergency room intakes that the patient was unable to afford.

Andrae Bailey, CEO of the commission that released the study, noted to the Orlando Sentinel that most chronically homeless people have a physical or mental disability, such as post-traumatic stress disorder. “These are not people who are just going to pull themselves up by their bootstraps and get a job,” he said. “They’re never going to get off the streets on their own.”

The most recent count found 1,577 chronically homeless individuals living in three central Florida counties — Osceola, Seminole, and Orange, which includes Orlando. As a result, the region is paying nearly $50 million annually to let homeless people languish on the streets.

There is a far cheaper option though: giving homeless people housing and supportive services. The study found that it would cost taxpayers just $10,051 per homeless person to give them a permanent place to live and services like job training and health care. That figure is 68 percent less than the public currently spends by allowing homeless people to remain on the streets. If central Florida took the permanent supportive housing approach, it could save $350 million over the next decade.

This is just the latest study showing how fiscally irresponsible it is for society to allow homelessness to continue. A study in Charlotte earlier this year found a new apartment complex oriented towards homeless people saved taxpayers $1.8 million in the first year alone. Similarly, the Centennial State will save millions by giving homeless people in southeast Colorado a place to live. And in Osceola County, Florida, researchers earlier this year found that taxpayers had spent $5,081,680 over the past decade in incarceration expenses to repeatedly jail just 37 chronically homeless people.