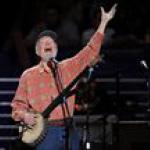 Over the past year, both founders of the Clearwater Festival - Pete and Toshi Seeger - died within six months of each other.

Yet the fest's current director, Steve Lurie, says the first all-star Clearwater fest since the couple's passing, this Saturday and Sunday, will be anything but a somber affair.

"This is a celebration, not a mourning," says Lurie. "These two people lived long, and they were extraordinarily effective in their lives."

Toshi was 91 when she died last July. When he passed away in January, folk icon Pete was 94. The couple started what grew into the Clearwater Fest 49 years ago as a small fund-raising event to help clean up the Hudson River. At first, Pete played alone at the event, originally called the Folk Picnic, then passed around his banjo case to raise money for the cause.

"The Hudson was a toxic dump back then, with garbage and sewage everywhere," Lurie says. "Now people swim in it."

Naturally, the weekend will also pay tribute to the fest's founders.

"It's been challenging to find a way to tastefully honor Pete and Toshi," Lurie says. "They were two of the most humble people. So we didn't want to have billboards off the highway that say `Come See the Pete and Toshi Memorial!' "

Instead the organizers came up with a series of performances to showcase their legacy. A banjo tribute will be led by Tony Trischka, while various musicians will perform music of Pete Seeger's two classic acts: the Weavers and the Almanac Singers, which also featured Woody Guthrie.

Another set will feature songs that Seeger wrote, or performed, to honor the 3,000 Americans who fought Fascism in the Spanish Civil War.

A separate area will feature a square-dancing stage, a nod to an art form the couple loved. The Seegers' love of global culture will be reflected in a stage for acts playing music from around the world, such as Moroccan Gnawa musician Hassan Hakmoun, Cajun band the Revelers, and the Jackson Heights-based Colombian rock band M.A.K.U. Soundsystem.

The family-friendly event offers free admission for kids under 12 and will features lots of activities for children. Those of any age can ride big and small ships on the Hudson and visit the Clearwater sloop, which doubles as an educational center about the progress of the river cleanup. The latest cause is advocating for the decommissioning of the Indian Point nuclear facility.

"It's a continual fight," says Lurie. "And it's something Pete and Toshi would have very much wanted us to continue."

An amazing weekend of great music and fun for the entire family, as well as a place to learn about Clearwater's mission and the important work we do, protecting the beautiful Hudson River and its surrounding communities.

Clearwater's 2014 Great Hudson River Revival, or Clearwater Festival, will take place on Saturday and Sunday, June 21 and 22 at Croton Point Park in Croton-on-Hudson, Westchester County, NY. Festival gates open to attendees at 9AM.

Some of the artists performing: 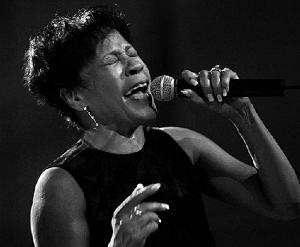 Singer Bettye LaVette is in the lineup for the Clearwater fest.
credit - AltSounds Network Ltd. (UK) 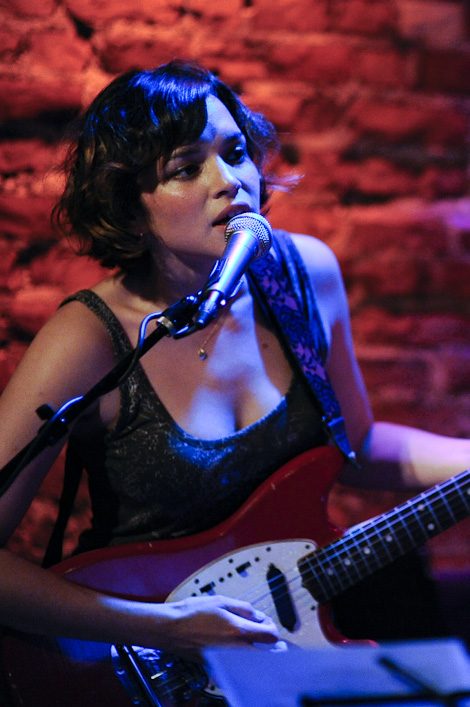 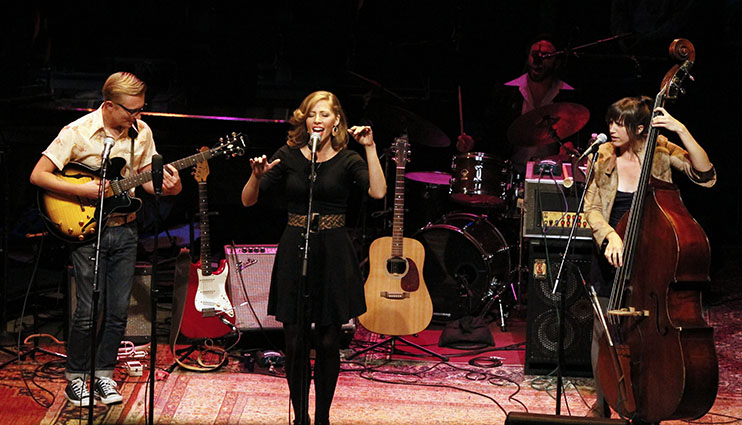 The group Lake Street Dive will perform in the Celebrate Brooklyn program.
credit - Bring Me Up / scrink.com

Pete Seeger and the Blacklist

Pete Seeger, as almost every reader of these pages will know, passed away at the age of 94 on Jan. 27, 2014. Pete was a great folksinger, explorer of US music, and song writer. In his younger days he was also a great banjo picker, and learned how to play the 12-string guitar (a difficult instrument in its own right) from the legendary Afro-American blues singer Huddie Ledbetter, better known as Leadbelly. He worked with one of the founding US folklorists, Alan Lomax, as well as his with his father, Charles Seeger and his step-mother, Ruth Crawford Seeger (mother of Pete's step-sister, the folk singer Peggy Seeger). And of course he was a close colleague of the iconic Woody Guthrie.

But in this space, I am not going to write about Pete the musician. This column is about Pete and the Blacklist, one of the darkest marks on 20th century US history, and quite different from the current TV show, "The Blacklist."  I was lucky enough to have heard Pete in concert in Carnegie Hall, New York City, singing with The Weavers in the late 1940s, before they were blacklisted. I had a brief personal contact with him during the blacklist-time. One way that performers like himself earned a living during that time was to do private performances in the homes of progressives. And so, in the early '50s my mother hired Pete to sing at a birthday party for me, in our home. (Either the year before that or the year afterwards, for my birthday she hired another great, and black-listed, US folk singer, and composer, Earl Robinson. He is perhaps best-known for writing "Ballad for Americans" for yet another great, black-listed personage, the singer-actor Paul Robeson.)

I next saw Pete at one of his "coming-out parties" as the blacklist was fading in the late 50s. He was hired to sing in a dorm living room at Vassar College, where my girl-friend at the time was a student. I have heard him concerts several times since. Finally, by happenstance I went to what was likely his last concert, with Woody's son Arlo, at Carnegie Hall, New York City, on December 30, 2013.

So for those of you who might not know, or know about it vaguely, what was the real "Blacklist?" It was literally a list of peoples' names, put together primarily by a private witch-hunting organization called "Red Channels." It worked closely with the notorious House Un-American Activities Committee, Joe McCarthy and his minions, and many other organizations and individuals who spent many years promoting the "Red Scare." The upshot of being "listed" was most often the loss of employment and the great diminution of opportunities to gain further employment in one's profession.

Some of the affected people finked out and "named names." If they named enough of them, either publicly, or privately like a Hollywood B-movie actor named Ronald Reagan did, they were let back in. Some artists who would not cooperate went abroad, like the spectacular harmonica virtuoso Larry Adler. He established a career in England, where he became a beloved performer. I was lucky enough to hear a radio interview with him, made late in his life. He was asked what he thought was the greatest thing he had done in his life, a life in which he virtually created virtuoso harmonica playing, and was widely applauded for it, for many years. Without hesitation, he replied "I never ratted on my friends."

And so, what was the Blacklist for? The Blacklist was used to punish people, professionally an economically, for their beliefs and for political activities, none of which were illegal. Yes, in the "Land of the Free and the Home of the Brave," in a nation that had just finished fighting a war for the "preservation of freedom and democracy," people were punished for their beliefs, say in promoting peaceful relations with the Soviet Union, like Paul Robeson did, or in promoting alternatives to capitalism, for being members of the Communist Party of the United States, like Pete was. Ironically, the CPUSA was not a revolutionary party. In the Party's charter was a clause (that is still there) that it was committed to what was called the "Parliamentary Road to Socialism." Definitely non-violent.

Or punished for heading an openly anti-fascist organization, like the Joint Anti-Fascist Refugee Committee, chaired by my childhood mentor and role model, Edward K. Barsky, MD. Eddie had been at one time the head of the Medical Unit for the whole of the International Brigade in Spain, during the Spanish Civil War, 1936-39 (the opening salvo of World War II). The Committee had been formed to help those who, following the end of the Spanish Civil War, in 1939 had fled the Franco fascists for miserable camps in the South of France. Like Eddie, who went to jail for four months for "contempt of Congress," and courtesy of the New York State Board for Medicine, had his medical license suspended for two years because of that, people were punished for refusing to answer questions before HUAC and other similar committees at the Federal and state levels, inquiring into their beliefs, memberships, and who they knew (when often the committee already had all the names they wanted to have), NOT for undertaking any otherwise illegal activities.

That was the real Blacklist. It punished people economically and socially for their beliefs. The blacklist worked hand-in-glove with those forces that were promoting the Red Hysteria to pump up the public for the prosecution of the Cold War against the nation that had just a few years before had been our close war-time ally and the bulwark against the German Nazi war machine. Virtually no one who was blacklisted could be accused of a crime, because they didn't commit any. But they suffered in their lives. Many, like Pete and Eddie, were strong enough to weather it through. But then there were those who never made it back and even those who committed suicide. An irony that few know about is that in the Woody Allen movie about the blacklist, "The Front," the part of a character based on a real black-listed show business person, who jumped out of a window, was played by the great Zero Mostel, who himself had been black-listed.

[Steven Jonas, MD, MPH, MS, is a Professor of Preventive Medicine at the School of Medicine, Stony Brook University (NY) and author/co-author/editor/co-editor of over 30 books on health policy, health and wellness, and sports and regular exercise. In addition to being a Trusted Author for OpEdNews, Dr. Jonas is a columnist for BuzzFlash.com/Truthout.org, Managing Editor and a Contributing Author for The Political Junkies for Progressive Democracy; a Senior Editor, Politics, for The Greanville Post; a Contributor to The Planetary Movement; a Contributor to Dandelion Salad, and a Contributor to TheHarderStuff newsletter. He is also a triathlete (30 seasons, 220-plus multi-sport races) and a skier (as well as a PSIA-Level Certified Instructor [retired]).]