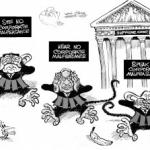 Since 1977, there have been eight murders, 17 attempted murders, 42 bombings, 181 arsons, 100 acid attacks and countless other incidents of blockades, vandalism and threats.

Today, the Supreme Court handed down a decision in McCullen v. Coakley, striking a Massachusetts law that protects patient access to abortion clinics by prohibiting anyone, other than patients and those who work for the clinic, regardless of their position on abortion, to come within 35 feet of a facility.

The Court's decision is a blow to a major protection for women and providers at Massachusetts abortion clinics and could have a devastating effect on the safety of women around the country.

Now is the time to stand strong in our support for the protection of abortion providers and their patients.

Buffer zones are critically important in helping to reduce the physical obstruction, intimidation, and violence to which providers and patients are often subject to at the clinics. With the loss of the Massachusetts buffer zone - where two women have already been shot dead and another five wounded - women will be vulnerable to harassment and violence while trying to get the care they need.

While the Supreme Court did not rule all buffer zones unconstitutional, it did make it more difficult for states to maintain them or put them in place, potentially putting women and providers across the country at risk.

Clinic escorts are now more important than ever.

Honor clinic escorts for their brave work every day in protecting women and providers.

More than 90 percent of abortion facilities report that they're concerned about the safety of their patients and employees in the areas surrounding the clinic. No one should be subject to this type of terror. Patients should be able to get the medical care they need and providers should be able to provide care without threats and acts of violence or intimidation.

Thank those who protect women and providers.

We cannot allow anti-abortion extremists to take the law into their own hands.

Thanks for keeping it personal,

After Recess Appointments Decision, Pressure on Senate to Reform

Today, the U.S. Supreme Court, in National Labor Relations Board v. Noel Canning, upheld the historically broad interpretation of the president's recess appointments power. At the same time, it opened the door to new forms of Senate obstruction by ruling that the president's recess appointments were invalid because the Senate had used "pro forma sessions" - sessions in name only where no business is conducted - to avoid going into recess.

"The Court was invited to eviscerate the president's recess appointments power, and it is a relief that it rejected those arguments," said Alicia Bannon, Counsel in the Democracy Program at the Brennan Center for Justice at NYU School of Law. "The decision was an important rejection of a narrow kind of originalism. The Court recognized that long historical practice regarding recess appointments should inform how we interpret the Constitution."

However, the ruling also creates a new opportunity for Senate obstruction of the appointment process through the use of pro forma sessions.

"The Court handed the Senate another tool of obstruction, allowing them to use a pro forma session to make an end run around the president's recess appointments power," Bannon added. "The Court said `most appointments are not controversial.' For two centuries that was true. But in recent years, there has been unprecedented obstruction of even noncontroversial nominees. The Court overlooked the important role that recess appointments play in our constitutional system in helping ensure a functioning government. After today's decision, the burden falls squarely on the U.S. Senate to fix its broken confirmation process and make government work again for the American people."

After this ruling, it is more important than ever to reform the confirmation process to cut back on obstruction. To reduce gridlock, the Senate must fulfill its advice-and-consent duty on executive and judicial nominees. Moving quickly on noncontroversial nominees, applying a `use it or lose it' http://fixthesenatenow.org/news/entry/use-it-or-lose-it-a-sensible-chan… standard for post-cloture debate time, and changing the Senate's blue slip process are three good places to start.

For more information or to set up an interview, please contact Erik Opsal at erik.opsal@nyu.edu or 646-292-8356.

In January 2012, President Obama used his recess appointment power to fill three vacancies on the National Labor Relations Board and provide the agency a quorum. After the Board affirmed an order against the Noel Canning corporation, the company filed suit challenging the legality of the NLRB appointments.

Today's Supreme Court decision invalidated the president's NLRB recess appointments, finding that because the Senate utilized "pro forma" sessions during its holiday recess - calling itself to session for a few seconds and conducting no business - it was not in recess at all. This procedural trick has the potential to make it very difficult for the president to use the recess appointment power.