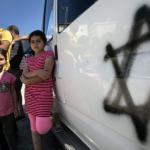 For five years now, they have been hearing nothing but incitement, scaremongering and supremacy over Arabs from this generation’s true instructor, Prime Minister Benjamin Netanyahu. Not one humane word, no commiseration or equal treatment.

They grew up with the provocative demand for recognition of Israel as a “Jewish state,” and they drew the inevitable conclusions. Even before any delineation of what a “Jewish state” means – will it be a state that dons tefillin (phylacteries), kisses mezuzot (doorpost fixtures with prayer scrolls), sanctifies charms, closes down on the Sabbath and keeps strict kashrut laws? – the penny has dropped for the masses.

The mob was the first to internalize its true significance: a Jewish state is one in which there is room only for Jews. The fate of Africans is to be sent to the Holot detention center in the Negev, while that of Palestinians is to suffer from pogroms. That’s how it works in a Jewish state: only this way can it be Jewish.

In the Jewish state-in-the-making, there is no room even for an Arab who strives his utmost to be a good Arab, such as the writer Sayed Kashua. In a Jewish state, the chairman of the Knesset plenary session, MK Ruth Calderon (from Yesh Atid – the “center” of the political map, needless to say), cuts off Arab MK Ahmed Tibi (United Arab List-Ta’al), who has just returned all shaken up from a visit to the family of the murdered Arab boy from Shoafat, impudently preaching to him that he must also refer to the three murdered Jewish teens (even after he did just that).

In a Jewish state, the High Court of Justice approves the demolition of a murder suspect’s family home even before his conviction. A Jewish state legislates racist and nationalist laws.

The media in the Jewish state wallows in the murder of three yeshiva students, while almost entirely ignoring the fates of several Palestinian youths of the same age who have been killed by army fire over the last few months, usually for no reason.

The new generation growing in its shadow is a dangerous one, both to itself and its surroundings. Netanyahu is its education minister; the militaristic and nationalist media serves as its pedagogic epic poem; the education system that takes it to Auschwitz and Hebron serves as its guide.

The new sabra (native-born Israeli) is a novel species, prickly both on the outside and the inside. He has never met his Palestinian counterpart, but knows everything about him – the sabra knows he is a wild animal, intent only on killing him; that he is a monster, a terrorist.

He knows that Israel has no partner for peace, since this is what he’s heard countless times from Netanyahu, Foreign Minister Avigdor Lieberman and Economy Minister Naftali Bennett. From Yair Lapid he’s heard that they are “Zoabis” – referring dismissively to MK Haneen Zoabi (Balad).

Being left wing or a seeker of justice in the Jewish state is deemed a crime, civil society is considered treacherous, true democracy an evil. In a Jewish state – dreamed of not only by the right wing but also by the supposed center-left, including Tzipi Livni and Lapid – democracy is blurred.

It’s not the skinheads that are the Jewish state’s main problem, it’s the sanctimonious eye-rollers, the thugs, the extreme right wing and the settlers. It’s not the margins but the mainstream, which is partly very nationalistic and partly indifferent.

In the Jewish state, there is no remnant of the biblical injunction to treat the minority or the stranger with justice. There are no more Jews left who marched with Martin Luther King or who sat in jail with Nelson Mandela. The Jewish state, which Israel insists the Palestinians recognize, must first recognize itself. At the end of the day, at the end of a terrible week, it seems that a Jewish state means a racist, nationalistic state, meant for Jews only.

Gideon Levy is a Haaretz columnist and a member of the newspaper's editorial board. Levy joined Haaretz in 1982, and spent four years as the newspaper's deputy editor. He is the author of the weekly Twilight Zone feature, which covers the Israeli occupation in the West Bank and Gaza over the last 25 years, as well as the writer of political editorials for the newspaper. Levy was the recipient of the Euro-Med Journalist Prize for 2008; the Leipzig Freedom Prize in 2001; the Israeli Journalists’ Union Prize in 1997; and The Association of Human Rights in Israel Award for 1996. His new book, The Punishment of Gaza, has just been published by Verso Publishing House in London and New York.