Students at the Barricades 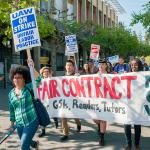 Last December, NYU graduate student employees won recognition for our union, GSOC-UAW, from the university administration. With an overwhelming 98.4% of votes cast in favor of the union, NYU became — for the second time — the first private university in the country to recognize the rights of its graduate student employees to collective representation.

After more than fifteen years of organizing, NYU’s graduate student workers had won a major victory, and the voluntary recognition of the union by the administration had the potential to set a new kind of precedent for other graduate student organizing campaigns around the country. But recognition was the start of a new round of struggle: one around what kind of a contract we could win, and what kind of union GSOC would be.

In July, a group of bargaining committee members — graduate students elected by their peers to represent us in our negotiations with the NYU administration — released a statement highlighting the “concessionary strategy, demobilization of our membership, and opacity of the bargaining process” on the part of UAW staff that they had witnessed over the course of the previous semester.

That statement, which charged union leadership with failing to adequately communicate with the membership and with the marginalization of activist members who sought to create an campaign to support the bargaining process, called for a new strategy to win a strong contract: one based on transparency, accountability, and building democratic structures within our unit.

In so doing, the dissenting bargaining committee members, and the nearly 120 members who signed a statement supporting their demands, joined a growing mobilization of graduate student workers around the country who are building member-led unions that can win real gains in their working conditions and forge strong links with other movements and unions fighting for social justice. We are helping to create a movement working from within union structures to push for internal democratization in the UAW as the only way to rebuild the strength of our union and the labor movement more broadly.

At the forefront of this movement is Academic Workers for a Democratic Union, a reform caucus that has been organizing in the University of California system for the past four years. After sweeping the elections for Local 2865 executive board positions statewide, AWDU leaders then radically reoriented the bargaining process and staged a contract campaign that sought to prove that there didn’t need to be a trade-off between so-called “bread and butter issues” — compensation, healthcare costs, teaching conditions — and social justice issues, such as support for undocumented students, working mothers, and trans* and gender non-conforming people.

Their opponents in the executive board elections argued that participation in the union by rank-and-file members was decreasing, and that AWDU actions were divisive and made the union “look weak” in the eyes of the management. But after AWDU overwhelmingly won the elections, they went on to win a contract, through their first open bargaining process, that includes wage increases of seventeen percent over four years, increased parental leave, higher childcare subsidies, and a provision on union input regarding class size. AWDU members say the deal proves that a strategy that prioritizes rank-and-file mobilization can not only win a strong contract, but can do so while forging connections and building solidarity across campus and across movements.

Similarly, at the University of Massachusetts-Amherst, representatives of the radical slate Workers for Respect, Action, and Democracy have assumed leadership not only of their unit, but also won leadership positions within their amalgamated local, which also includes healthcare and childcare workers. Building solidarity across shops is vital in Local 2332, where graduate workers on nine-month contracts are, in fact, more highly paid than some of the other full-time workers in the unit — and yet, according to union activists, they were not seen as true “workers” by former leadership (a curious stance for an organization increasingly relying on dues paid by academic workers).

And graduate workers oriented toward social-justice unionism can make a real political difference beyond the university: it was the Teaching Assistants Association, an AFT affiliate at the University of Wisconsin-Madison, that organized the first protests against Governor Scott Walker’s 2011 budget bill to strip collective bargaining rights from public sector workers in that state, sparking the largest protest in Wisconsin history.

The setback to collective bargaining rights in that state is a huge blow to the labor movement in Wisconsin and around the country, but it should be remembered it was radical graduate students who led the fight back against it.

Of course, back at NYU, the recognition of GSOC was won in the context of crucial cross-issue organizing, when the administration was feeling pressure from faculty, student, and community groups around its financial priorities. The changes occurring in the academic workforce mirror those occurring in other sectors: Increasing casualization and reliance on low-wage contract work have eroded job security at the university, just as in the auto plants.

Our struggle in GSOC was part of a larger struggle to reorient the priorities of one of the most expensive universities in the country, and in so doing push back against the neoliberalization of higher education more broadly. I participated as a GSOC member in a number of collective actions, from the center of campus to the steps of City Hall, to work with and support other activists to force NYU to offer concessions as a university, neighbor, and employer.

But many members feel that during our first few months of negotiations, the UAW has prioritized expediency over engagement with the membership and the larger community, and has promoted a conciliatory stance toward management that has failed, thus far, to win economic gains.

The NYU administration is pushing for a six-year contract with insufficient wage increases for the lowest-wage workers in our unit, many of whom make $10 an hour and have to cover their own health care premiums. Such a long contract would be devastating for member mobilization in our unit: As graduate students, our time in this workplace is limited, and anyone involved in the struggle to win this contract would be long gone by the time it came up for renegotiation.

As a result of the strategy pursued over the last few months, many long-time GSOC activists, including core organizers who have dedicated years to card-check campaigns, found ourselves excluded, ignored, and, in the worst cases, derided by our leadership. We found ourselves without mechanisms for participation, let alone decision-making. And when we tried to create democratic, participatory structures — by establishing an organizing committee for a sustained contract campaign, for example — UAW staff squashed them.

Tired of hearing staff accuse members of being “process-oriented radicals” from departments that were “unreasonably entitled” to union participation, and unable to resolve problems of transparency and accountability internally, the dissident members of the bargaining committee spoke out. Now, thanks to their efforts and sustained pressure from the rank and file, a new strategy is taking hold.

Elections will soon be held to fill bargaining committee vacancies for the coming semester, and the new spirit of transparency and member engagement will hopefully preclude some of the problems produced when the UAW handpicked a slate of members to run against radicals, only to see half of them dissent or resign after a semester of bargaining that failed to secure a contract. The bargaining committee needs committed, experienced organizers in its ranks; exclusion of members based on their political orientations won’t be tolerated.

Our attempt to build a stronger, more democratic union isn’t an attack on the UAW — it’s an attempt to make our union as strong as possible, to win the best contract, and to most effectively play a role in ongoing struggles for social justice. It demonstrates not weakness or a division within our ranks, but a deep well of support on campus for a stronger stance with management.

During AWDU’s campaign in California, the fear that “division” would make the union look weak in the eyes of management was a constant refrain from the previous leadership, but AWDU’s principled stance won not only a strong contract, but energized members and connected them to struggles beyond their workplace. Charges of divisive actions within grad student unions are a cover to maintain the top-down status quo — and they’ve been proven wrong.

At NYU, we have the opportunity to set an important precedent for other private universities. We can be much stronger if we work together with other campaigns. According to union activists, however, building connections here in the Northeast — between schools like UMass, UConn, Yale, Columbia, and NYU — has actually been impeded by the regional UAW leadership. As UMass GEO Co-Chair Anna Waltman put it, “It’s extremely challenging to cultivate genuine, mutual support and solidarity with other graduate workers at the rank-and-file level in the UAW, largely due to calcified hierarchies and a maze of bureaucracy.” She noted that rank-and-file leaders at these institutions have been “made to feel that the leaders of our own union do not trust us to talk to one another without supervision,” concluding, “I love the UAW, but I also believe that we can do better than this.”

We are doing better. Graduate workers across the country are coming together to build networks through the Coalition of Graduate Employee Unions and other grassroots groups. The history of the US labor movement over the past century shows that unions that are democratic and establish ties with other social movements are best able to win — and yet UAW leadership seems interested in neither.

But together, radical graduate student workers are beginning to change that culture, and in so doing, begin a process of revival from below.