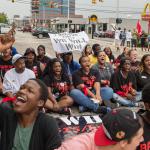 DURHAM, North Carolina — For nearly a month and a half, protesting fast food workers have insisted that they were willing to do “whatever it takes” in order to earn union recognition and a higher wage. On Thursday, they demonstrated what that means.

Hundreds of workers across the United States engaged in non-violent acts of civil disobedience, risking arrest to demonstrate their commitment to boosting wages and working conditions. In Durham, N.C., 23 workers occupied a series of increasingly busy street intersections, sitting on the pavement and block traffic for an hour or so before moving on to the next location. Other workers chanted and danced around those who were obstructing traffic, as a drum line of supporters pounded away on their snare and bass drums.

All told, thousands of fast food workers across 150 U.S. cities walked off the job on Thursday. Hundreds of those workers — nearly 500 of them, according to a public relations firm supporting the strikes — willfully committed civil disobedience as part of their protest, and were subsequently arrested by the police. A member of Congress who participated in one of the protests was also arrested.

In Durham, part of North Carolina’s prosperous and fast-growing Research Triangle, police arrested 26 protesters, including two campaign organizers and one attorney affiliated with the movement. Local police followed the city’s protest for upwards of three hours while making no arrests, even as workers sat in a series of increasingly busy intersections. Eventually, the protesters advanced to the corner of West Main Street and Great Jones Street, one of the busier intersections in downtown, where 23 workers wearing red arm bands sat down in the middle of the street. The police blocked off traffic around the intersection but did not advance on the protesters for about an hour and a half. Eventually, after additional officers arrived on the scene, the protesters in the street were ordered to disperse. When they did not comply after five minutes, the police began arresting them one at a time.

Overall, 19 employees were arrested in New York City, 42 in Detroit, 23 in Chicago, 11 in Little Rock and 10 in Las Vegas. As lunchtime began, demonstrators staged sit-ins outside of McDonald’s restaurants in every region of the country, including Atlanta, Boston, Charleston, Hartford, Miami and Philadelphia.

In Wisconsin, police arrested Rep. Gwen Moore, a Democrat, as she stood with workers during a strike in Milwaukee.

The 19 cooks and cashiers first detained in New York City’s Times Square had gathered before dawn and were arrested for blocking traffic. The movement — aimed primarily against McDonald’s, Burger King, Wendy’s and KFC — continued to spread throughout the day.

None of the workers resisted arrest. Some smiled as the police marched them to waiting cruisers. Other protesters, standing on the sidewalk, cheered with each new arrest.

The executive director of the National Council of Chain Restaurants (NCRR), Rob Green, called the strikes “disturbing” and “irresponsible.” Such actions place restaurant workers and their customers in danger of physical harm, he said.

Fast food workers have repeatedly vowed to take whatever measures are necessary in order to win a $15 hourly wage and union rights, a rallying cry they deemed “Fight for 15.”

In response to the unrest, a Wendy’s spokesperson said the chain is “proud to give thousands of people, who come to us for an entry-level job, the opportunity to learn and develop important skills so that they can grow with us or move on to something else.”

And at McDonald’s, “we respect everyone’s rights to peacefully protest. The topic of minimum wage goes well beyond McDonald’s — it affects our country’s entire workforce,” Lisa McComb, director of McDonald’s media relations, said in a statement. “McDonald’s and our independent franchisees support paying our valued employees fair wages aligned with a competitive marketplace.”

Thursday’s strike is the first to take place since the fast food workers held their national convention in July in the suburbs of Chicago. At the convention, some 1,300 fast food workers agreed to a resolution vowing that they would do “whatever it takes” to achieve their goals. Workers who had been arrested in May at a protest in front of the McDonald’s headquarters in Oak Brook, Illinois – the movement’s first major act of civil disobedience – spoke to the audience about the experience of getting arrested, and encouraged other workers to take part in civil disobedience if necessary.

“We are going to break the law,” Nancy Salgado, a McDonald’s employee and leader among the local Illinois workers, told the audience at the time. “We’ve got to do whatever it takes to win, and we’ve got to do civil disobedience. We’ve got to do it.”

Thursday’s strike was announced on Labor Day, just hours after President Obama made a positive mention of the fast food movement in his address on the national holiday. Speaking at an event in Milwaukee, the president said the fast food workers were “organizing to lift wages so they can provide for their families with pride and dignity.”

This is also the first nationwide fast food action to occur since August’s protests in Fergusion, Missouri. Jeanina Jenkins, a McDonald’s employee in Ferguson, said she believes those protests will be on the minds of many striking fast food workers.

“We’re fighting for the same thing, basically,” she said.

The protesters in the fast food fight have their work cut out for them. Most fast food restaurants are franchised locations, meaning they are not owned by the corporations themselves. However, those corporations do have latitude to tightly control what goes on in the stores – they can regulate wages and working conditions for employees even if they are not legally considered “employers.”

However, recent policy changes within the National Labor Relations Board (NLRB) may eventually change the franchising model dramatically. In late July, the NLRB’s general counsel determined that McDonald’s could be considered a “joint employer” with its franchisees, a move that makes it possible for the board’s regional offices to argue that the corporation should be held legally accountable in certain cases when its franchisees are found to violate labor law.

Catherine Ruckelshaus, general counsel for the National Employment Law Project, said forcing McDonald’s to answer for some of those alleged violations would give workers more power to demand change within both individual locations and across all McDonald’s restaurants.

“I think the NLRB general counsel’s directive certainly can help the workers get more leverage against McDonald’s, because often times the franchisees have very little power to actually enact the changes the workers are actually asking for,” she said.

McDonald’s has described the NLRB general counsel’s decision as “wrong.”

“McDonald’s also believes that this decision changes the rules for thousands of small businesses, and goes against decades of established law regarding the franchise model in the United States,” according to a statement on the company’s website.