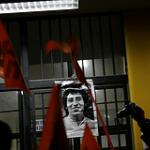 Hernán Chacón Soto and Patricio Vásquez Donoso face kidnapping and murder charges. Ramón Melo Silva, a former military prosecutor, stands accused of covering up the truth about what happened to Jara that day. The new charges are in addition to those brought against eight other ex-military officers in December 2012 and January 2013.

ALEC has now lost most of big players in the Internet. Since it became clear Google won't renew its membership, Facebook, Yelp and Yahoo immediately followed. Only eBay is left.

Facebook says: "While we have tried to work within ALEC to bring that organization closer to our view on some key issues, it seems unlikely that we will make sufficient progress so we are not likely to renew our membership in 2015."

Yelp says it dropped its membership months ago, and after defending its membership, Yahoo reversed its position and also says it will leave.

"The departure of these firms from ALEC shows that denying the facts on climate change, really doesn't have a place in the modern business world," Brant Olsen of Forecast the Facts told Common Dreams.

Google, GE and others contribute to climate-change deniers in Congress, report finds

Other contributing companies, however, are actively pursuing sustainability agendas. For example, General Electric (GE) - which donated $1,756,457 - announced plans last year to reduce the energy intensity of its operations by 50% by 2015. Similarly, Google, whose efforts to fight climate change have included a $1bn contribution to developing renewable electricity, contributed $699,195 to congressional climate deniers, including US senator James Inhofe, a Republican from Oklahoma, and US representative Darrell Issa, a Republican from California.

Meet the companies that are trying to profit from global warming

Global warming isn't necessarily bad news for everyone. For some companies and countries, it may be even be a huge boon.

A number of companies, investors, and governments are starting to realize that some amount of climate change is inevitable in the decades ahead. And while that may cause problems for many people, it also opens up opportunities to make lots of money.

Study: History of cultural bias has led to a lack of diversity at liberal green groups

Minorities represent nearly 40 percent of Americans, yet account for fewer than 16 percent of workers at the government agencies, nongovernmental organizations called NGOs and foundations that were studied.

"This isn't literary": Alison Bechdel, Roz Chast and why it's so hard for us to take comics seriously

Some of the problems comics face in being taken seriously does come from the creators themselves - some of whom are uneasy with being taken seriously. Some of the best deride the term "graphic novel" at any opportunity, which is partly why I'm using the word "comics" in this very piece. And some of the problem certainly comes from the way in which comics are one of the earliest forms we encounter, and we are encouraged, despite decreasing evidence, to believe comics are for children, and should not be read by serious adults. Way before people scoffed at you for reading YA [Young Adult], they scoffed if you read comics. And this is a uniquely American provincial take, to be sure - cultures around the world all take comics seriously. We as Americans do not. Not yet.