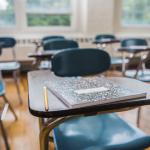 It was the “data walls” that drove Agustin Morales, an English teacher at Maurice A. Donahue Elementary School in Holyoke, Massachusetts, to speak up.

Last February, Morales and some of his colleagues, as well as parents whose students attend Holyoke public schools, spoke at a school committee meeting (the equivalent of a school board) and protested a directive from higher-ups to post students’ test scores on the walls of their classrooms, complete with the students’ names. Paula Burke, parent of a third-grader at Donahue, called the walls “public humiliation.” Some teachers questioned whether posting data publicly violated the Family Educational Rights and Privacy Act. As I reported at the time for In These Times, the superintendent tried to turn the tables on teachers, saying that they were never told to use students’ names and that the directive did not come from the administration, but the teachers released a PowerPoint from their training session that clearly showed photos of sample data walls, with first names and last initials.

Now, Morales thinks his standing up to the administration has cost him his job. And a preliminary finding from the Massachusetts Department of Labor Relations backs him up. In September, the board found that there was probable cause to believe that the non-renewal letter he received in June from the district was because of his protected union activity.

Morales tells Salon that for the first two and a half years he taught in Holyoke, the western Massachusetts town where he grew up, his evaluations were stellar. But after the school committee meeting last February, his evaluations “just got so unbelievably negative.” He was elected president of the Holyoke Teachers Association, a local chapter of the Massachusetts Teachers Association, in May as a reform candidate, part of the Educators for a Democratic Union (EDU) caucus that also elected Barbara Madeloni president of the state union. A month later, he was fired.

“All of a sudden I start speaking out and I can’t do anything right,” he says. “I can’t write good lesson plans, I can’t control my classroom, I’m doing everything possible wrong. All of a sudden. The writing for me was on the wall.”

Dan Clawson, a member of EDU and a prominent labor sociologist at the University of Massachusetts-Amherst, connects Morales’s firing to the larger struggles going on nationwide around teacher tenure. In June, a California judge ruled in Vergara v. California that teacher tenure and seniority laws were unconstitutional. Though legal experts questioned the legal reasoning of the decision, anti-union education reformers declared victory and announced plans to move on — Campbell Brown, former CNN anchor turned professional anti-teacher campaigner, launched a similar lawsuit in New York despite sending her own children to private school.

“In some sense, Gus is the poster child for why teachers need tenure,” Clawson tells Salon. “Without tenure, we are all Gus Morales: if we speak up for students, we will be fired, even if what we are pointing to are violations of the law by the school system.”

In Massachusetts, a teacher achieves “professional teacher status,” equivalent to tenure, after three years in one school district. Morales, who has been teaching for seven years, was just on the cusp of having this protection in Holyoke. It’s worth noting that tenure or its equivalent is not what Brown and other campaigners like to call it, a guaranteed job for life — the school district can still fire you, they’re just required to give you due process first.

Morales finds the attack on him frustrating because, he says, by speaking out he hoped to make things better. “Even in some of my speeches, you can go back and listen to them, I said ‘This is not about any one person or any one policy, it’s about a system that’s broken,’” he says. “I’m doing my job as a teacher, but because of my extracurricular activities speaking against some of the reforms, all of a sudden, my livelihood gets tied to my extracurricular activities and that’s just so inappropriate. Because here you have kids that are in front of me, and if I witness bad things, am I not supposed to report those things?”

The initial finding from the Labor Department was a relief for Morales, though he says he never doubted that his firing was retaliation. “Even though people were very supportive of me, still there was that doubt in the air. What this did, a third party that has nothing to do with Holyoke Public Schools and has nothing to do with the Holyoke Teachers Association, they’re a separate entity, they found the probable cause after both sides presented their case. A completely removed, unbiased party, finding probable cause for retaliation in the district.”

The complaint, issued by the Department of Labor Relations and provided to Salon by Morales, explains that there is “probable cause” to believe that a violation of the law occurred and lists the possible violations to be discussed at the hearing, including the possibility that “the School Committee has discriminated against Morales for engaging in concerted activity protected by Section 2 of the Law in violation of Section 10(a)(3) of the Law.”

Parents, other teachers from the district and across the state and the Pioneer Valley Labor Council all came out to support Morales at the press conference they held when they got the news from the labor department. But for now, all they can do is wait. The full hearing will be scheduled for November or December, and Morales notes ruefully that without the income from his teaching job, he’s had to sell his house and move into a smaller apartment. Still, he says, “You don’t get into a fight like this and not expect to get hit. This is a hit for me, but I’m still standing.”

Meanwhile, he says, he’s got his hands full as president of the union. Teachers and students are stressed out constantly over high-stakes testing, and poorer districts like Holyoke face the brunt of the “reforms.” “From my district alone, we’re losing teachers, and not just teachers that are being bullied either,” Morales says. “We’re losing good teachers that are being left alone for the most part but they just can’t witness it anymore. They can’t deal with all the crying, they can’t deal with all the stress, they can’t deal with the anxiety. You have all these teachers who are so anxious, the anxiety is so thick it’s actually, at points for me, it feels like it’s tangible, like I can actually touch the anxiety.”

He continues, “I get emails constantly from teachers saying ‘I’m looking for another job; I can’t do this anymore.’ And it bothers me because I know they love their job, they really do, they love teaching, what they don’t love is the bureaucracy that has been intertwined with teaching, that has no place in teaching but now it pretty much has taken up teaching.”

Around the state and around the country, though, teachers are standing up and getting more support from parents as it becomes clear that education “reform” based on endless testing rather than equitable funding is not helping children.

For Morales, there’s no other choice.

“There’s definitely some consequences and there are some dangers to it but if we keep allowing these things to happen, if we don’t stand up to any of these dangers — data walls is just one of them, high-stakes testing is another one — if we don’t start fighting back, my biggest worry, the thing that keeps me up at night, is that there’s not going to be a teaching profession in five years. It’s all going to be minimum wage employees basically running the schools with scripts. That’s the biggest danger posed to us, and if our leaders, if our superintendents, if our principals, if they don’t start questioning what’s going on, we’re all done.”