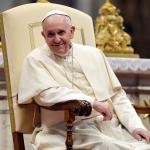 The theories of evolution and the Big Bang are real and God is not “a magician with a magic wand”, Pope Francis has declared.

Speaking at the Pontifical Academy of Sciences, the Pope made comments which experts said put an end to the “pseudo theories” of creationism and intelligent design that some argue were encouraged by his predecessor, Benedict XVI.

Francis explained that both scientific theories were not incompatible with the existence of a creator – arguing instead that they “require it”.

“When we read about Creation in Genesis, we run the risk of imagining God was a magician, with a magic wand able to do everything. But that is not so,” Francis said.

He added: “He created human beings and let them develop according to the internal laws that he gave to each one so they would reach their fulfilment.

“The Big Bang, which today we hold to be the origin of the world, does not contradict the intervention of the divine creator but, rather, requires it.

“Evolution in nature is not inconsistent with the notion of creation, because evolution requires the creation of beings that evolve.”

The Catholic Church has long had a reputation for being anti-science – most famously when Galileo faced the inquisition and was forced to retract his “heretic” theory that the Earth revolved around the Sun.

But Pope Francis’s comments were more in keeping with the progressive work of Pope Pius XII, who opened the door to the idea of evolution and actively welcomed the Big Bang theory. In 1996, John Paul II went further and suggested evolution was “more than a hypothesis” and “effectively proven fact”.

Yet more recently, Benedict XVI and his close advisors have apparently endorsed the idea that intelligent design underpins evolution – the idea that natural selection on its own is insufficient to explain the complexity of the world. In 2005, his close associate Cardinal Schoenborn wrote an article saying “evolution in the sense of common ancestry might be true, but evolution in the neo-Darwinian sense – an unguided, unplanned process – is not”.

Giovanni Bignami, a professor and president of Italy’s National Institute for Astrophysics, told the Italian news agency Adnkronos: “The pope’s statement is significant. We are the direct descendents from the Big Bang that created the universe. Evolution came from creation.”
Despite the huge gulf in theological stance between his tenure and that of his predecessor, Francis praised Benedict XVI as he unveiled a bronze bust of him at the academy's headquarters in the Vatican Gardens.

“No one could ever say of him that study and science made him and his love for God and his neighbour wither,” Francis said, according to a translation by the Catholic News Service.

“On the contrary, knowledge, wisdom and prayer enlarged his heart and his spirit. Let us thank God for the gift that he gave the church and the world with the existence and the pontificate of Pope Benedict.”