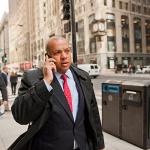 You'll have to forgive me for feeling a little paranoid these days, as I recently saw Kill the Messenger, a great new movie starring Jeremy Renner.

It tells the story of Gary Webb, an intrepid investigative reporter who uncovers a plot, allegedly overseen by the CIA, to let drug traffickers flood the United States with cocaine, leading to the crack epidemic in black communities.

For his efforts, Webb was attacked by government officials and especially his colleagues in the media, who went after him with more vigor than they went after the CIA.

In addition to the movie, I've been following the appalling tale of how Sun-Times reporter Dave McKinney felt he had to resign in protest after the paper's management pulled him off a story about Bruce Rauner, the Republican candidate for governor.

But while many of us have been consumed by that mess, there's been another spooky development at City Hall: a switcheroo in the city treasurer's office, where one investment banker is about to be replaced by another.

Is it my imagination or has the banking and private-equity crowd taken over?

I'd call it a coup, except this crowd has been running the show for years. Most of us just weren't paying enough attention to notice.

For starters, Mayor Emanuel is an investment banker. Or he used to be, in the three years between leaving the Clinton White House and running for Congress in 2002.

In that period Emanuel made about $18 million, putting together deals by tapping connections he made in the White House.

This led to one of the great exchanges of my journalistic career, when, back in 2002, I was granted an audience with his Rahmship while he was running for Congress.

I asked him how someone becomes an investment banker. Do you have to start as a teller and work your way up?

As I recall, he gave me his patented kiss-my-ass look—the one we've all come to know and love—and took a call on his cell. Our relationship has been going downhill ever since.

As you might have heard, Emanuel's mentor during his short but sweet banking career was Rauner, who made hundreds of millions of dollars buying and selling other businesses through GTCR, his former investment firm.

If Rahm and Bruce team up to outsource the Chicago Public Schools to a GTCR subsidiary in the Cayman Islands, don't say I didn't warn you.

Speaking of rich guys who throw around lots of money, we can't overlook Kenneth Griffin, the richest man in the state.

He runs Citadel LLC, a hedge fund operation. Over the last year he's donated more than $4.5 million to Rauner. He's also pitched in more than $250,000 total to Emanuel and Chicago Forward, the mayor's PAC.

Though he calls himself a champion of free markets, Griffin also contributed previously to such big-government Democrats as Governor Rod Blagojevich and Mayor Richard M. Daley.

As Alderman Ed Burke likes to say, there are no permanent friends or enemies in Chicago politics—just permanent interests.

Widawsky replaced Amer Ahmad, who stepped down after the feds indicted him on a kickback scheme from his days as deputy treasurer in Ohio.

Ahmad got the job in Chicago thanks to a recommendation from Lois Scott, Mayor Emanuel's chief financial officer.

You know, this is starting to sound like a rap song about the Illuminati.

In the most recent development at City Hall, Mayor Emanuel has nominated Kurt Summers to replace treasurer Stephanie Neely, who's voluntarily stepping down.

It's run by Michael Sacks, one of Emanuel's top advisers and campaign contributors. Last month he and his wife, Cari, each gave $50,000 to Chicago Forward. That's on top of $150,000 Michael Sacks gave the PAC in June.

Sacks is also on the board of World Business Chicago, a consortium of corporate leaders that, as far as I can figure, exists mainly to tell the mayor what a wonderful job he's doing.

In that regard, it's very similar to the Board of Education, except the World Business board members also give the mayor lots of campaign money.

For the record, Stephanie Neely was a vice president at Northern Trust Global Investments before Mayor Daley appointed her treasurer in 2006.

Neely says she's thinking of returning to private industry. I suggest she call Michael Sacks—I'm sure he can help out.

Now I know you're thinking, well, so what? Investments should be overseen by people who are good with money.

But c'mon—there must be a few bean counters in town who don't work for the same circle of corporate investment firms.

The most important thing the treasurer does is to make sure the mayor's adequately funding the pension systems. At the moment, they're woefully underfunded.

So what we really need is someone with the guts to say, "Um, boss, you might want to reconsider paying tens of millions of dollars for that DePaul basketball arena until you make your full pension payment first."

Good luck finding someone like that in corporate Chicago.

Continually hiring investment bankers to watch our money is like—oh, what did Rauner remind us is the definition of insanity? Doing the same thing over and over and expecting different results.

Here's hoping that Summers finds his inner Gary Webb and tells the truth to powerful people, starting with the mayor.

Unfortunately, stuff like that usually only happens in the movies.