In the Struggle Against Police Violence, the Youth Shall Lead 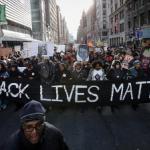 More than 50,000 people marched on the streets of New York City this past Saturday, December 13, to protest the two recent grand jury decisions-in Ferguson, Missouri, and in New York City-not to indict the police officers responsible for the deaths of 18-year-old Michael Brown and 43-year-old Eric Garner, both unarmed black men. The New York march was conceived and organized by Synead Nichols and Umaara Iynaas Elliott, two young performers, with support later coming from Million Hoodies Movement for Justice and Justice League NYC. Similar demonstrations took place in Boston, Chicago, San Francisco and other cities across the country. Among the signs and chants that decorated the day, the words "Black Lives Matter" were perhaps the most popular. The simple but powerful slogan was created by Alicia Garza, Patrisse Cullors and Opal Tometi, and has moved from a Twitter hashtag to "movement project," to borrow Garza's phrase, that has "connected people across the country working to end the various forms of injustice impacting our people" and "created space for the celebration and humanization of Black lives."

All that is a bit different from what unfolded in the nation's capital that same day.

Rev. Al Sharpton and the National Action Network (NAN) called for a national march on Washington. They drew a crowd of about 10,000, but among those were some young people expressing anger toward Sharpton and his organization, suggesting that the event was co-opting their struggle for Sharpton's own aggrandizement, diluting their message and drowning out the voices of the people who have faced down tanks, tear gas and rubber bullets in their efforts to get justice. The tension reached a tipping point when a group of activists, some who had been on the ground in Ferguson from the day Michael Brown was killed, took to the stage and demanded the microphone. Johnetta Elzie, one half of the duo responsible for the Ferguson e-mail newsletter that has kept its subscribers apprised of the latest in movement news, used the moment before the microphone was cut off to say: "This movement was started by the young people. We started this. It should be young people all over this stage. It should be young people all up here." Sharpton told The Root there were young people invited to speak.

The day after all of these marches took place, reclusive soul singer D'Angelo released the long-awaited third album, Black Messiah. It's quite a hefty title, particularly for a project fifteen years in the making. In explaining why he chose this title for this new album, D'Angelo wrote: "For me, the title is about all of us. It's about the world. It's about an idea we can aspire to. We should all aspire to be a Black Messiah..bIt's not about praising one charismatic leader but celebrating thousands of them..' Black Messiah' is not one man. It's a feeling that, collectively, we are all that leader."

In order for us all to be leaders, though, we also need to know what role we play in the movement. I think this is what some of our elders are struggling with most.

Sharpton has been a constant presence in the streets and in the media for nearly thirty years now. There's no denying that his work, however polarizing he or his persona have been, has kept the victims of police violence in our national consciousness when others would have turned away. But now, at 60 years old with a nationally syndicated radio show, an MSNBC primetime television program and a seat in President Obama's unofficial cabinet, Sharpton's days as an outside agitator are over. He is firmly part of the establishment. And being part of the establishment (and wanting to maintain that position) necessitates that you not advance an agenda aimed at radical change, lest you compromise your own privileges. Sharpton has become a leading voice [f]or respectability politics, consistently admonishing black youth for their choices in music and clothing. And his position on police brutality is that the problem is a few bad apples, rather tha the racist and unjust nature of policing in the United States. If all we are left with is Sharpton to lead a grassroots movement from an establishment position, we march toward justice would move along at a pace that Toni Morrison's "slow walk of trees" would find too stagnant.

But it isn't all bad. We could use more insiders that understand and/or are sympathetic to the voices of outsiders. From his new position, Sharpton could be amplifying the voices of those young people fighting every day in this new movement, providing them a platform to be heard. The media attention that he once had to fight for he can now hand over to a new generation with relative ease. But he has to understand that he no longer defines the movement.

In saying that, I don't mean to suggest that Sharpton, or any other leaders/activists/organizers of his generation, should have no say in the movement's direction. Healthy dialogue, debate and critique from all sides are vital to any movement. But when you're sucking up all the oxygen in the room, and not using your resources toward the most effective means, you have to ask yourself if you're being more of a hindrance to progress.

This new movement is being led by mostly young black women who won't allow us to forget that black women's lives matter, too (Columbia University Law professor Kimberle Crenshaw was present with a large banner that featured the pictues and names of black women and girls also killed by police). It is drawing in diverse crowds, including white allies who are not calling for gradual change, but a total end to white supremacy. The people in the street have neck tattoos, are dressed in sagging skinny jeans, and curse loudly (among the more popular chants: "BACK UP, BACK UP, WE WANT FREEDOM, FREEDOM, ALL THESE RACIST ASS COPS, WE DON'T NEED `EM, NEED `EM!" and "WHO SHUT SHIT DOWN? WE SHUT SHIT DOWN!"). The movement doesn't look or sound like anything our elders remember (or were taught) about the civil rights era. And that's OK. We have a new fight. We have to create a new model of resistance.

Everyone has a role to play, and in order for a movement to be successful, everyone (young and old) must understand what that role is and not be afraid to shift into a new one when the time for that comes.