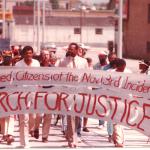 In the aftermath of the Republican victories in the midterm elections, some liberals have been asking whether they really “need” the South. In electoral terms, should progressives essentially ignore the South and concentrate on other regions in order to ensure a long-term favorable bloc?

In a recent essay in The Daily Beast, Michael Tomasky makes just that case. The frustration is perfectly understandable, but it would be a disastrous direction for progressives.

The South has always contained within it two diametrically opposed possibilities. On the one hand, it’s been a seat of political reaction. The heart of slavery; the site of the infamous “Trail of Tears,” the long march of Native Americans out of the southeast; the home of Jim Crow segregation, lynching, and extreme anti-union animus.

But the South was also the region of slave resistance, including but not limited to rebellions; the magnificent democratic experiment known as “Reconstruction”; a very militant labor movement, which sometimes withstood the pressures of racial segregation; and a heart of the Black Freedom Movement.

The dominance of political reaction in the South has always placed constraints on the ability of a progressive, let alone left-wing, movement to grow and sustain itself. It has long created greater and more effective means of encroaching on social, economic, and political victories won elsewhere in the United States.

So-called “right to work” laws, for example, have roots in the South and the Southwest. Much of the trade union movement believed that right to work laws would remain relatively contained in those regions, but over time, like any other form of disease, these have spread.

Another critical example can be found in the 1968 presidential candidacy of former Alabama Governor George Wallace. Based in the South, Wallace tapped into the so-called white backlash against civil rights and progress, and moved North, demonstrating what Malcolm X had always argued: the South was everything south of the Canadian border.

The Richard Nixon campaign modified and adopted Wallace’s approach as the “Southern strategy” of 1968, which would have been better called the “white people strategy.” This orientation of making the Republican Party the non-black party has been with us ever since, evolving over time into a more racist and xenophobic phenomenon despite its periodic overtures towards various peoples of color.

So, we can’t leave the South alone, even if we wanted to. And we shouldn’t want to, because there are actually enormous organizing possibilities in the region.

The South has been a hotbed of labor struggles since the 1860s. Whether in the form of the spontaneous organizing and strikes by emancipated blacks; or the Knights of Labor that organized across racial lines; or still later the Industrial Workers of the World and their organizing in the Southern ports or the Louisiana timber industry; or during the iconic 1930s, the work of unions such as the United Mine Workers and the Food, Tobacco, Agricultural, and Allied Workers; or in the 1960s and early 1970s, in the movement to organize public sector workers and health care workers — tremendous and often successful efforts have been undertaken by Southern workers to build labor organizations. All of this took place in the context of fierce and frequently openly violent repression.

In each case of worker organizing, the employers and their governmental allies attempted to play the “race card” as a means of dividing the workforce. By the 1940s, the Congress of Industrial Organizations, standing at what seemed to be a pivotal moment and in a strong position, thought that they could organize the South, but they insisted on doing it in the absence of the Left (and most especially the Communists) and without touching the race issue. This effort failed miserably except for those locations where the Left was leading the struggle.

Thus, by the late 1940s most of organized labor in effect followed the line articulated by liberals like Tomasky and abandoned the South. Rather than seeing in the developing Civil Rights Movement a strategic partner with whom it could conceivably join hands as part of a larger democratic movement, the bulk of organized labor withdrew before the reactionary, racist onslaught. As a result, as the 1940s turned into the 1950s, which turned into the 1960s, the movement for democracy and people’s power in the South was in fact the Black Freedom Movement, the remaining battalions from a very unfinished Civil War.

What organized labor missed, and to a great extent continues to miss, is that the South will not magically become a bastion of progress. There will need to be base areas that are created, and these will not be created by labor unions operating alone, organizing factory by factory, or even public sector agency by public sector agency. It will necessitate a movement of a very different type, a movement envisioned over the years by some very outstanding progressive leaders that unites the black freedom efforts and organized labor. Today, however, there is a third stand to this movement: the growing Latino immigrant workforce in the South.

In 1988, then-presidential candidate Reverend Jesse Jackson summarized the nature of the movement to be built when he said, metaphorically, that in one hand he had a union card and in the other hand a voting card. In other words, this is a movement for economic and political power; with political power especially referencing the historically disenfranchised and gerrymandered African-American population. This must be a movement that speaks to and for the poor, whether white, black, Asian, Latino, or Native American.

Right-wing populism generally and neo-Confederate politics in particular have a strong base in the South. About that there is no debate. As the economy has cast aside or made employment more precarious for increasing numbers of white workers and middle-strata employees, right-wing populism has a great appeal.

Specifically in its neo-Confederate variant, it appeals to certain historical symbols and myths of the South, and identifies both old enemies (Jews, blacks) and new enemies (immigrants). It weaves a web of dishonesty, fear, and hatred focusing on the alleged obstacles to the progress of the white working population.

Instead of progressives sounding the bugle of retreat, exactly the opposite is necessary. The elements of the progressive movement that already exist in the South must be supported. Whether Reverend Barber’s “Moral Monday” movement in North Carolina or electoral movements that have emerged in Virginia, Florida, and Mississippi (and in the Southwest, Texas, and New Mexico), the South does not lack for progressive organizations and initiatives. What it needs is greater support, and it also needs a different narrative that becomes a battle cry around the country.

Transforming the South will require the sort of movement referenced above. It will need to be grounded in local struggles that are knitted together through networks and, more importantly, common strategies. It will also need to engage our opponents by challenging them in ways that they might never have anticipated.

Through this work progressives can and will create base areas in the South that will take on an electoral dimension. This means, very specifically, that organized labor must be among the first movements to commit itself to building left power in the South.

That new labor movement will be a movement of working people including but not limited to trade unions. And it must be a movement that has a strategic alliance with the broader black and Latino immigrant populations, that specifically reaches out to African-American elected officials. This alliance must be visionary and united by clear and shared objectives. The result will be a truly new South.

An earlier version of this essay appeared in Telesur-English.