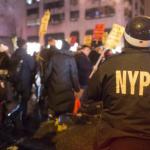 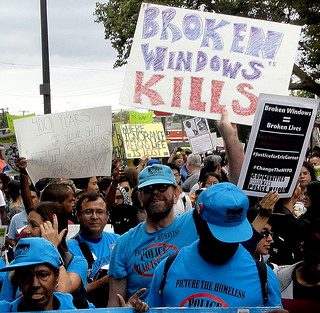 The NYPD just admitted that 90% of the work they do is unnecessary. Homeless people have been saying that for decades!
Picture the Homeless - The Blog

After the New York Police Department threw a tantrum because the mayor demanded they follow the law, several right-wing media sources began to proclaim that it would result in a crime wave. Both groups were left slack-jawed when not only did a rash of criminal activity fail to appear, but the existing criminal element they were claiming to protect the people from seemingly vanished overnight.

By declaring their intent to only perform arrests when "absolutely necessary" the thought was that it would cause an increase in crime, and the political pressure would build on the police department's side. In addition, the idea is to hurt the New York City government with a reduction in revenue from things like parking tickets or court citations. The police are still arresting those who clearly pose a danger to the public, but by ignoring the lesser crimes - the incidents which are at the heart of the "Broken Window" policy which has been in force since the 1980's - they have revealed that the policy itself is broken.

Originating in 1982 by Professors George L. Kelling and James Q. Wilson in a piece written for The Atlantic, the idea behind Broken Window is expressed with a simple statement.

If a window in a building is broken and is left unrepaired, all the rest of the windows will soon be broken.

The idea behind it is that by severely punishing minor crimes, more serious crimes are thwarted. It has been the driving force behind such diverse policies as NYPD's Stop and Frisk and California's Three-Strikes law. These policies it seems may actually increase crime, as the police enforcement can result in needless escalation.

When people have protested issues with the police, the cops have often aimed to incite violence. Combining these, it is easy to see that the policies under which police departments have been guided may themselves be to blame for many of the problems we now face. Our prison population is now larger than those of the Soviet Union's infamous Gulags, and the /largest prison system in history. http://www.addictinginfo.org/2014/07/08/american-gulag/

The statistics speak for themselves, revealing that the New York Police Department has been needlessly arresting people who were not criminals at all. Rather than bolstering their case, the NYPD has instead given Mayor Bill de Blasio proof that the department is indeed out of control, and not accountable to the people they are there to protect. Instead of the anticipated surge in criminal activity, the results of the work stoppage have shown that the police have been arresting needlessly, the result of strict EPA regulations causing a decades-long drop of crime across the city as well as elsewhere nationwide.

The transition of the justice system from law enforcement to profit center was a slow one, but now it is near absolute. There have been whole towns which had police citations as their primary revenue source. Private prisons generate record revenue and have turned into a new form of slavery. This is made worse when you realize that most prisoners have never even been before a jury for trial.

The NYPD is the largest police force in the United States. As a result, it is a good study for understanding what is wrong with American justice. By their work stoppage, the NYPD hoped to show how indispensable they are. Instead, ironically, it demonstrated that the department itself has been the problem the whole time. If we want to see crime drop in the largest city in the big apple, it is time for real reforms.

[Nathaniel Downes is the a native of New Hampshire, now living in Seattle Washington developing the next-generation superpowered MMORPG, City of Titans. Feel free to follow Nathaniel Downes on Facebook or Google Plus. He has just released his first book, available in Hardcover, Paperback, and Kindle.]

The NYPD Slowdown Is Proving That `Broken Windows' Is a Failure. Isn't It Time to Drop It?

It should be harder for the New York City Police Department to go back to "business as usual" once it has resolved its issues with the mayor.

As the New York City Police Department continues its standoff with Mayor Bill de Blasio over his perceived lack of support, the conversation caused by the police slowdown is providing strong ammunition for critics of overly aggressive law-enforcement tactics within urban communities.

At this point, there has been no significant impact to public safety because of the slowdown-during which tickets and summons for minor offenses have dropped more than 90 percent-and we've seen anything but the doomsday crime spree that Patrolmen's Benevolent Association President Patrick Lynch seemed to hope might cause widespread fear among New Yorkers.

Lynch, who leads the NYPD's largest and most influential union, has been very critical of de Blasio in past weeks, accusing him of expressing anti-policing sentiments in his remarks after the Staten Island grand jury's nonindictment in the Eric Garner choke hold case.

Lynch's inflammatory sentiments have intensified in the wake of the slaying of two NYPD officers in late December while they were on duty in Brooklyn. According to the New York Post, leaders of the five police unions have orchestrated what amounts to a work stoppage of NYPD officers (the PBA denies that the work stoppage is orchestrated). Still, the effect on the crime rate has been minimal. This strongly suggests that the NYPD's typical over-policing-particularly within communities of color-is hardly as necessary as many have previously suggested.

In many ways, the slowdown is backfiring terribly and should force a bigger discussion about not only the need to revisit the "broken windows" approach to law enforcement in urban communities but also the age-old trend of funding America's cities on the backs of the poor.

The broken-windows approach to law enforcement, which de Blasio endorsed during the early days of his tenure, is essentially Reaganomics' trickle-down theory of policing. (Remember how well that worked out?) The idea is essentially that focusing on strict policing of smaller offenses will deter larger crimes from happening. However, the notion that police, by cracking down on low-level crimes like selling loose cigarettes and open containers, are going to deter hardened criminals is a dubious theory at best. This is, in part, because economics drives most real crime more than any other factor.

As a former prosecutor, I found the most common reasons people committed crimes to be connected to their own finances and/or rooted in the economic constraints of their surrounding environment. The threat of a summons for riding a bicycle on the sidewalk is hardly a deterrent for larger crimes when those crimes might help make ends meet for unemployed or underemployed people. This is the problem with broken-windows policing: The theory fails because it attributes the cause of crime to the "tolerance" and escalation of lesser crimes rather than acknowledging that crime rates are higher in poorer communities primarily because people do not like being poor.

Beyond failed theory, broken-windows policing in New York City has failed miserably in its practice. Eric Garner is now dead because of excessively aggressive police tactics stemming from a broken-windows approach. In a state where it is illegal to smoke almost anywhere, there was hardly a threat to public safety or quality of life that necessitated applying a choke hold to arrest someone suspected of selling untaxed cigarettes.

This is just an example of the disaster that results when flawed criminal theory is misapplied by overzealous police officers. It is not to suggest that lawlessness is the answer, but one of the ironic revelations coming out of the NYPD's slowdown is that dialing back the aggressive approach of over-policing will not make the sky over Brooklyn start to fall.
See Also

In the NYPD's misapplication of broken-windows policing, there is also the undeniable racial element that makes it even further problematic. Between 2001 and 2013, more than 80 percent of the summonses for minor violations in New York City were issued to blacks and Hispanics. For years, black and Hispanic residents in New York City as well as criminal-justice advocates have cried foul over Police Department tactics like stop and frisk that are indicative of a mindset that condones harsher treatment of communities of color.

Proponents of such tactics (including former New York City Mayor Rudy Giuliani and former New York City Police Commissioner Ray Kelly) have cited public safety and crime control as justification. The slowdown not only disproves this-since it started, there have been no reports of significant spikes in serious crimes-but also should hopefully make it more difficult for the NYPD to go back to "business as usual" once it resolves its quarrel with the mayor.

So what is the real takeaway from the NYPD slowdown where "broken windows" is concerned? We already knew that it was flawed in theory, and we have seen it fail miserably in application. One wild and crazy idea is that this approach to policing and the slowdown are both about little more than power and economics. The Police Department is attempting to flex its muscles to remind de Blasio and the thousands of nonviolent protesters who have dared to speak out against NYPD practices that the city needs them. The message is essentially that, even beyond the prevention of crime, police are still needed to help generate critical amounts of revenue for the city's operating budget.

These silly games aren't limited to the Big Apple, however. From as far away as Ferguson, Mo., we've witnessed how municipalities balance their budgets on the backs of the poor through the financial windfall created by excessive fines and tickets (which, as an aside, invalidates the claim that there's no such thing as police quotas). The same thing can be said for Washington, D.C., Philadelphia, Los Angeles and scores of other cities across the country. Pat Lynch is no doubt aware of this, and beyond any ineffective fear tactics, his real play here may very well be an intentional swipe at the city's pocketbook, which could threaten to hijack next year's budget.

If anything, that seems like a real crime worth policing.

[Charles F. Coleman Jr. is a civil rights attorney and former Brooklyn, N.Y., prosecutor. He is also an adjunct criminal-justice professor at Berkeley College in New York. Follow him on Twitter.]