Marissa Alexander Released From Prison, But Still Not Free 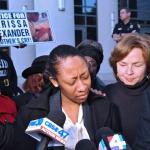 Marissa Alexander, a domestic violence survivor and mother of three, was released from prison in Jacksonville, Florida on Wednesday after serving three years for firing a warning shot at her abusive husband. She will serve another two years under house arrest.

"Today, after the sentence given by Judge [James] Daniel, my family and I can move on with our lives," Alexander said in a statement following the hearing.

On Wednesday, her supporters and civil rights advocates—many of whom created the Free Marissa Campaign during her incarceration—said Alexander's release from prison, while welcome, is not justice.

"One of the biggest issues and injustices Marissa’s prosecution and incarceration illuminates is the criminalization of women who defend themselves," Ayanna Harris, co-organizer of the Chicago Alliance to Free Marissa Alexander, told Common Dreams. "Marissa Alexander was bound at an intersection that illuminated many ills in our justice system, including mandatory minimum sentencing, the criminalizing of those who defend themselves, [and] inconsistent application of Stand Your Ground laws, just to name a few."

"Marissa will be forced to be on strict home detention while being under surveillance for two years," said Sumayya Coleman, co-leader of the Free Marissa Now Mobilization Campaign. "This is by no means freedom in the sense we feel she deserves."

While Alexander's release from prison is a step in the right direction, Coleman said, what is needed next is "a systemic transformation that prevents black women and all survivors of domestic violence from experiencing the hostile and brutal treatment from policing, prosecution, and prison systems that Marissa has endured."

Under house arrest, Alexander will have to wear an ankle bracelet that monitors her location through GPS tracking. She will be responsible for the $105 weekly cost of using the ankle bracelet, a total of $10,920 over the two years, and will be forbidden from leaving her house except for attending work, church, her children's school, or legal or medical appointments. Though supporters have collected funds to offset some of the collective costs of Alexander's house arrest, journalist Maya Schenwar recently explained how these electronic restrictions serve to "prisonize" her home.

"Instead, the 'guards' are satellites, their gaze always present, and they don't even blink," Schenwar said.

Two other factors in Alexander's case that cannot be disassociated from her punishment, observers say, are her race and gender. As Nita Chaudhary, co-founder of women's rights group UltraViolet, and Rashad Robinson, executive director of Color of Change, wrote for MSNBC:

Marissa’s early release isn’t true justice. Nor is her close call with a near-life sentence some mishap that could happen only in Florida’s courts.

For four years – three spent in prison and one under house arrest – Marissa had been fighting a losing battle for her freedom. She had three strikes against her the second she pulled that trigger: she is black, she is a woman, and she is a domestic violence survivor.

"It is egregious that many states have adopted Stand Your Ground legislation that is not protecting victims of domestic abuse," Harris told Common Dreams. "We must examine why states were comfortable with adopting legislation that would protect those who killed others in the name of self-defense, but not those who in protecting their own lives valued the life of those inflicting harm."

No one was hurt the night that Alexander fired a gun to fend off an attack from her estranged husband, 36-year-old Rico Gray. The bullet ricocheted off the wall behind him and hit the ceiling. She called it a "warning shot."

The case came shortly after George Zimmerman's acquittal for murder in the shooting death of unarmed teenager Trayvon Martin. State Attorney Angela Corey's aggressive prosecution of Alexander for a lesser charge sparked protests against both the individual case and the larger issues it represented.

During Alexander's sentencing in May 2012, Florida State Rep. Corrine Brown took part in a courtroom protest, saying State Attorney Angela Corey had overcharged Alexander in a case of institutional racism.

"Where is the compassion? Where is the justice?" Brown said after the sentencing. "It does not stand today in Jacksonville and is unacceptable."

"Three years is not mercy and 20 years is not justice," Brown added. "If there ever was a stand-your-ground case, it was this one."

In June 2014, Florida Governor Rick Scott signed a Warning Shot bill into law, extending the protections of Stand Your Ground to those who threatened to use force without falling under the state's 10-20-life law.

That Scott authorized that legislation, "a bill that was drafted with Marissa in mind, without adding any retroactive language to protect Marissa was another injustice," Harris said. "To think that if Marissa were to fire the warning shot today, the State of Florida would be prohibited from prosecuting her speaks more about the limitations of the law than Marissa’s actions on August 1, 2010." Moreover, Alexander is now a convicted felon, which takes away her ability to vote in Florida. As Katie McDonough at Salon points out:

And while Jacksonville happens to be one of three cities in Florida that does not require people convicted of felonies to check a box alerting employers of their record on an initial job application, hiring and workplace discrimination against people convicted of crimes continues to harm the ability of women like Alexander to support themselves and their families.

However, Alexander's case is far from unique. The New York State Department of Corrections and Community Supervision, for example, found in a March 2013 study (pdf) that 67 percent of women who were imprisoned in the state for "killing someone close to them were abused by the victim of their crime." In a separate study, 90 percent of women in one New York prison reported experiencing physical or sexual violence in their lifetimes.

According to Chaudhary and Robinson, two-thirds of all women in prison in the United States are incarcerated for non-violent offenses, and 75 percent are survivors of domestic violence whose abusers were given lesser punishments. The authors continue:

While white women are more often treated as victims in domestic abuse cases and referred to services for help, women of color end up incarcerated as criminals and now make up the majority of the women in prison.

"No, this isn’t justice," Chaudhary and Robinson write. "And neither is it for the other thousands of black and brown women who decided their lives matter enough to seek an escape from domestic violence, only to be told they’re wrong."