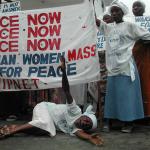 It was a scene of incredible carnage.

In July 2003, a recently re-armed rebel group, Liberians United for Reconciliation and Democracy, resumed its two-month siege of the capital, Monrovia, fighting to wrest control of the country from President Charles Taylor. Child soldiers were fighting on both sides, in an area filled with civilians.

In the battle known locally as “World War III,” the young soldiers fighting for the rebels were armed with what The Economist called “shiny new toys,” with which they had no experience. The fighting left hundreds of civilians dead and another 2,000 injured.

“[T]he mortar fire was so poorly aimed it was especially terrifying and difficult for civilians to avoid,” according to the international nonprofit Human Rights Watch. The bullets, shrapnel and mortar rockets ripped through bodies, causing instant death and mutilation, according to eyewitness reports obtained by the group.

One of the companies ferrying the arms to neighboring Guinea to be distributed to the Liberian rebels was Katex Mines Guinee, according to a panel of United Nations experts. Katex Mines was one of several Katex companies that have operated across West Africa and Europe in the construction, plastics, gas and brick industries.

HSBC Private Bank (Suisse) was Katex Mines Guinee’s banker at the time, and it continued to provide the company with financial services even after the United Nations fingered the company as a “possible provider of weapons” to Liberian rebels. According to files obtained by the International Consortium of Investigative Journalists and Le Monde, the account was opened by February 2001.  At some point in 2006, the year in which it was closed, the account balance reached $7.14 million.

Katex Mines Guinee is not the only HSBC account linked to conflict across Africa, according to the data.

HSBC Private Bank, operating out of famously neutral Switzerland, was a financial conduit for business operators and criminals who fueled and financed some of Africa’s bloodiest wars and most corrupt arms deals.

For HSBC, the men and women behind these conflicts were lucrative clients; collectively, the accounts of people linked to arms trafficking and corrupt weapons contracting in at least seven African countries held balances in 2006 or 2007 that totaled more than $56 million.

HSBC has acknowledged that its Swiss private bank previously lacked appropriate compliance cultures and standards of due diligence. “Today,” the bank told ICIJ in a letter, “the Management team in Switzerland… is substantially different to the period before 2011.”

In 2000, after a series of controversial loans, HSBC adopted tough anti-weapons financing measures. The new policy, which is still in force, stated: "We do not provide financial services for transactions for the purchase of other weapons” such as guns or missiles.

But the policy did not prevent the bank from operating accounts for clients involved in arms trafficking and conflict. HSBC did so even when that involvement had been revealed – sometimes years beforehand – in news articles, judicial investigations and United Nations reports.

HSBC’s clients included a cigarette factory owner who allegedly ferried weapons to rebels during Burundi’s civil war in the early 1990s. Another was the wife of a Parisian businessman whose account was used by her husband to help funnel millions in bribes to Angolan military and government officials to win contracts for tanks, land mines and warships during the country’s civil war. HSBC also signed up a South African political adviser and a Tanzanian lobbyist who together allegedly received $24 million for persuading governments to buy overpriced radar and jet contracts from BAE Systems.

Guns bound for LibyaChinese-made guns that were seized en-route to Libya.HSBC also provided financial services to a Libyan engineer with ties to former dictator Colonel Muammar Gadhafi and who allegedly worked with members of the Italian Mafia from 2006 to attempt to import 500,000 Chinese Kalashnikov rifles to Libya.

While some of HSBC’s accounts associated with alleged arms dealers were eventually blocked, others remained active.

None of the individuals involved in the accounts above responded to a request by ICIJ for comment.

"Arms traffickers rely on anonymous bank accounts like those offered by Swiss financial institutions to disguise their identities and hide the proceeds of their black market weapons deliveries," Kathi Austin, an expert on arms trafficking and Executive Director of the Conflict Awareness Project, said in an interview with ICIJ.

“Too many civilian lives are at stake for Swiss banks to turn a blind eye to those illicitly supplying terrorists and armed groups in conflicts zones around the world.”

The clearest case in which HSBC failed to stop dealing with an alleged arms trafficker was that of Katex Mines Guinee, directed by Ahmad Fouzi Hadj. At one point in 2005, HSBC blocked the account for unspecified compliance reasons, but the documents ICIJ obtained show that Hadj and the bank continued their relationship until September 2006.

At the time of the uprising in Liberia, the government of Guinea, the neighboring Western African nation where Katex operated, had long been suspected of supporting Liberian rebels. In July 2002, Guinea’s Ministry for Urban Affairs and Habitat signed a $35 million contract with Katex for the construction of homes and warehouses. The money was transferred to Katex’s HSBC account in Geneva.

U.N. expert observers investigated Katex shipments from Nov. 8, 2002, to Aug. 5, 2003, including a shipment to the Ministry of Defense June 30, just before the siege in Liberia. Their report to the Security Council said a Ukrainian-based airline delivered the shipment on flights that originated in Ukraine. Authorities and airline officials there asserted that they didn’t contain weapons. But the U.N. observers established that weapons were loaded at a stop in Tehran, Iran.

“The Panel understands that Katex has imported weapons and ammunition during the last 10 months,” the report said, adding that the observers suspected arms dealing when they saw green wooden boxes labeled “detergent,” imported by Katex on the Ukrainian airline, being loaded onto military trucks. “Incorrect manifesting is … a common tactic to disguise shipments of weapons,” the U.N. experts said.

In a November 2003 report, Human Rights Watch reported allegations that Guinea’s Ministry of Defense used Katex Mines “as a broker for military procurement,” citing a bill of lading for mortar shells with Katex’s name on it. The U.N. experts had reported that special forces attached to the Presidency of Guinea and known as the Red Berets were guarding Katex’s offices in Guinea’s capital, Conakry. And, it noted, “Further confirmation was obtained from diplomatic sources that weapons had been transported by truck from Katex Mine[s] Guinea to Koyama and Macenta,” near the border with Liberia.

The civil war officially ended only a month after the 2003 “World War III” battle in Monrovia.  In 2005, Ellen Johnson Sirleaf, a Harvard-trained economist and former minister of finance, was elected president of Liberia, the first elected female president of an African country.  She was re-elected in 2011.

Hadj’s career is an odd mix of acclaim and criminal convictions. Born in Syria in the town of Qamishli near the border with Turkey, Hadj emigrated to Italy.

His claim to have been trained as a heart surgeon has been both repeated and disputed in press accounts. But he went on to acclaim in Italy, where he amassed a fortune and acquired with his wife at least seven houses and villas, one Monte Carlo hotel and a restaurant by 2006, according to Italian investigators. Katex Mines Guinee, one of four Guinea-based Katex companies but which does not appear to operate any mines within the country, was founded in 1998 and imported agricultural products and industrial machinery into the West African nation, according to Human Rights Watch.

Hadj also has had a string of investigations and criminal convictions, starting in the 1990s.

In 2004, when he was HSBC’s client, prosecutors in Monte Carlo opened an investigation into Hadj on money laundering charges. The outcome of the investigation is not known.

Details of Hadj’s work in Guinea began to emerge through an investigation by Italian police into an allegedly fraudulent bankruptcy of Katex Italy S.à.r.l., a Katex subsidiary that traded in industrial pipes and which allegedly hid $12.5 million dollars from authorities. Hadj was convicted on bankruptcy fraud charges and sentenced to six years in prison in 2013, which Hadj is now appealing.  The Italian newspaper La Repubblica reported in July of that year that Hadj had left Italy and was living in Ukraine.

In 2014, Hadj received a seven-month suspended sentence for illegally financing a former Italian mayor’s election campaign in 2007. In November 2014, Hadj was convicted again and sentenced to another six years in prison, this time of fraudulent bankruptcy of the Lucchese football club, of which Hadj was the chairman between 2005 and 2008.  At the time of his arrest in 2010, Italian newspapers reported that police found Hadj, “white beard unkempt,” hiding in the boiler room of his luxury villa’s swimming pool, pretending to be a plumber.

Through his lawyer, Hadj declined to comment on “his old affairs.”

During the Katex Italy bankruptcy investigation, Italian authorities tapped phones of Hadj and his colleagues and made transcripts of the conversations, copies of which have been made available to ICIJ.  The conversations reveal details of Hadj’s global business dealings, including his close relationship with Guinea’s leader and explicit references to bribery.

On a call on May 5, 2005, he talked with a colleague about a payment to “the old man,” a common term of respect in francophone West Africa; Italian investigators believe this to be a reference to the former president of Guinea, Lansana Conté, who died in 2008.

In the same call, Hadj congratulates a Katex colleague on making bribe payments of $3 million to the Governor of the Central Bank of Guinea and to President Conté but concedes “we should not always behave like this.”

A military junta seized power following Conté’s death in 2008, committing mass human rights abuses, including the 2009 massacre of hundreds of men and rape of dozens of women inside a sports stadium. Democracy returned to Guinea following elections in 2010, although the country remains one of Africa’s poorest nations and has been at the epicenter of West Africa’s Ebola outbreak.

Throughout the turmoil that followed Conté’s death, Katex’s work in Guinea continued.  A company representative attended the 2009 opening of a $7 million arms depot built by Katex, according to media reports.

“It is a real pleasure for me to serve the [junta],” said the Katex representative.

[Will Fitzgibbon and Martha M. Hamilton are members of the International Consortium of Investigative Journalists, a project of the Center for Public Integrity.]