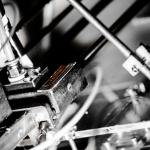 For 3D printing guru John Morton, a dream future involves waking up on a Saturday morning to a hot cup of coffee and a pancake made into his favorite shape waiting for him in his kitchen. Or what about, he says, 100,000 pancakes served at a conference pancake breakfast, all created hot on-site and shaped into the conference’s initials.

Thanks to advancements in 3D food printing, Morton's dream may not be far from reality. He should know, as the founder of 3DSupplyWorld.com, a website dedicated to making 3D printers and accessories more accessible for businesses and consumers.

At this point, 3D food printing is more than a concept thought up by hopeful entrepreneurs. Everyone from The Hershey Company to the U.S. Army and NASA is exploring the possibilities of what 3D food printing is and what uses it could have in the future. One company, Natural Machines, has already produced Foodini, a veritable 3D printer and mechanical chef that takes your pre-made ingredients and takes the hassle out of putting it together yourself.

How does 3D food printing work?

In its purest form, 3D printing is a way to make three-dimensional solid objects using a machine and digital file. Together they use an additive layering process to create successive layers of material until the object is formed. At the moment, those layers of materials typically consist of plastic, metal, nylon, epoxy resins, and wax, to name a few. But for some 3D printing companies, they’re hungry for 3D printed food.

Morton likens the way 3D printing can create edible food to using a piping bag to decorate a cake. To use a piping bag, you fill up the bag with the icing, twist to close the top, squeeze the icing out through a small hole in the corner, and move your hands around to create shapes and patterns.

With a 3D food printer, you load a food-safe syringe with your material—say, chocolate or sugar—and close up the syringe. You heat the material into a shapeable form, such as thick, semi-molten chocolate, using metal coils placed around the syringe and then use some sort of plunger or air compressor in the 3D printer to push the molten chocolate out. From there, the 3D printer acts as normal, applying layers upon layers based on the shape in the digital file you created and loaded into the printer. Once the printer is done, you let the object dry at room temperature. And there you have a 3D chocolate figurine, ready to eat hot off the 3D printer.

While this sounds simple enough, Morton says a standard 3D printer would not be readily able to print your chocolate figurine. 3D food printing takes modifications both in the machinery, such as using a paste-struder instead of a traditional extruder, and in the digital file, as printing with food is different than printing with plastic or metal. The printer materials that touch the food are one of the biggest hurdles aspiring 3D food printing technicians and companies face.

Are 3D foods safe to eat and 3D printers safe to use?

When it comes to 3D food printing, safety is a major concern for companies, consumers, and the FDA. To print foods that are both edible and safe, certain food-safe materials have to be used both for the food itself as well as any parts or machinery that touch the food in the printing process. That includes the syringe, the printer bed where the object stands, and sometimes certain machine parts. Currently in use are food-grade syringes made of food-safe plastic and edible rice paper for the printer bed.

The 3D food printing industry doesn’t end at just food. It also includes any other materials that touch food, such as plates, utensils, containers, and teapots. These 3D printed objects must also be made of food-safe materials. Morton says that at this time, the FDA has approved only one type of material to come into direct contact with food, Taulman t-glase, which is a 3D printing filament (the material loaded into a 3D printer) made of approved polymers.

Morton says that other materials may be safe, but not all, depending on the food you’re eating. For example, you would need to make sure acid from the food or hot temperatures don’t react with certain plastics that could be used to handle 3D printed food. One such alternative is ceramics, such as those used by 3D printing company i.materialise, which is best suited for customizable tableware.

Finding the right, safe materials for 3D food printing is going to be the main challenge for businesses moving forward in this industry. Without those materials, the 3D food industry could die before it ever has a chance to take off.

What effect could this have on the food industry?

As with any major technology shift, which Morton says 3D printing has the potential to do, people fear losing their jobs and businesses fear losing money. When consumers have the convenience and customization offered by 3D printed food, it would come as no surprise if food companies took a hit in sales or if other companies adopted the technology themselves, which could mean laying off workers.

According to Arbitrage Magazine, "[3D printing's] potential to disrupt traditional manufacturing processes is as large as the technological revolutions currently sweeping industries such as media and telecommunications. Given the global reach of the manufacturing industry, 3D printing’s impact is poised to be even larger."

One food industry example comes from 3D printed meat production, which researchers say could grow into its own industry and threaten traditional meat producers. However, as reported by 3DPrint.com, Joseph Sebranek, a food science and human nutrition professor at Iowa State University, has a differing, more optimistic opinion. He says, “While this might be an alternative, I wouldn’t expect it to replace the industry, especially with consumer interests in natural, organic products.”

Whether it’s general manufacturing or food manufacturing, not all people believe this could be the end all for businesses and their employees.

“I would call this a disruptive technology,” says Morton. “We’re talking about automating manufacturing, one of the biggest industries in the world. However, what people hope will happen is that it will not replace a job, but make it easier.”

3D food printing is still in its initial stages of research, development, and practical implementation, but major companies and national organizations are already making headway into making the technology a reality in the near future. Soon enough, Morton may just have his mass pancake manufactory brought to life.