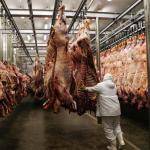 Here's one vision of the future of meat: We manufacture it from stem cells in giant "bioreactors" of the sort you might find in a modern pharmaceutical factory. The cells come from a contented pig that lives in the yard outside the village meat factory, where technicians sometimes poke it with a biopsy needle, and meat-eaters with quiet consciences give it a pat on their way to buy a cultured piece of it.

That vision, more or less, is fleshed out in a paper published in the June issue of Trends in Biotechnology by philosopher Cor van der Weele and biotechnologist Johannes Tramper, a pair of Dutch researchers from the University of Wageningen. Both describe themselves as "modest" meat-eaters, concerned about what modern meat production does to the planet and to the animals themselves.

The answer to both concerns, they suggest, and the way to create an alternative that meat-eaters will actually eat, may be to grow synthetic meat locally on a small scale. Instead of raising pigs on factory farms and killing them in slaughterhouses, van der Weele explained in an email, "pigs can act as living cell banks, while also keeping us in touch with animals, as well as the sources of our food."

In short, we could have our pig—or cow, or chicken—and eat it too.

Meat has very bad press these days, while alternatives to it are celebrated in TED talks. With global demand rising inexorably, everyone from the U.N. Food and Agriculture Organization to Bill Gates has declared meat unsustainable, at least as it's currently produced.

Gates has invested in Beyond Meat, a Columbia, Missouri, start-up that has made faux chicken strips good enough to fool New York Times food writer Mark Bittman. (The strips were wrapped in a burrito.) Beyond Meat makes its product (available at Whole Foods) from soy and amaranth, applying a secret texturizing process to give it the fibrous feel of chicken breast.

Since we've reduced animals to machines for producing meat, Bittman and others argue, why not just go ahead and make animal meat with machines and give the actual animals a break?

Besides providing an alternative to raising livestock on Earth, Modern Meadow sees an opening for its product on long-duration space missions (which won't have room for livestock). "Cultured meat can boldly go where no meat has gone before," the company's website quips. Modern Meadow is partially funded by Peter Thiel, co-founder of PayPal.

Google co-founder Sergey Brin is backing a different horse. In a video last year, Brin explains why he bankrolled the world's first cultured-beef hamburger, which was synthesized from stem cells and served up last summer by Mark Post of Maastricht University in the Netherlands. "Sometimes a new technology comes along and it has the ability to transform how we view our world," Brin says, wearing Google glasses as he stares at the camera. The burger cost him more than $300,000. "Mouthfeel was good but taste needs improvement," says Post. He still has to figure out how to add fat to the burger.

Post's long-term goal is to grow cultured steak—but that's going to be much, much harder than growing a lot of muscle fibers and mashing them into a patty. "You need to build a complex tissue with blood vessel-like structures to nourish the inner layers," Post emailed from Japan, where he was on his way to a 3-D printing conference. "It requires simultaneously assembling different cells and biomaterials in the right configuration."

Some critics of industrial livestock operations are intensely skeptical that cultured meat is the solution. Food activist Danielle Nierenberg thinks the "huge yuck factor" is going to limit the future of "petri dish meat."

"People who wouldn't eat tofu a few years ago, now they're going to eat meat grown in a lab?" she asks. A better future, Nierenberg and others argue, would require some degree of returning to the past—eating less meat, as we used to, and producing it in a less intensive way, on farms rather than feedlots.

In a way, van der Weele and Tramper are responding to that kind of objection in their paper—they're trying to unite futurist geeks and small-is-beautiful "locavores" behind a cultured-meat product that is palatable to both. Their pig in the backyard is not just a source of stem cells. It's also meant to provide the sort of connection to our food chain that many people miss in the modern way of eating.

"Here, all of a sudden, we get a glimpse of a possible world in which we can have it all: meat, the end of animal suffering, the company of animals and simple technology close to our homes," van der Weele wrote in an earlier paper.

In the Dutch researchers' scheme, the stem cells—which unlike ordinary cells are capable of replicating themselves many times—would pass from the pig through a chain of progressively larger flasks, until the cells had multiplied enough to fill the largest currently available bioreactor, which holds 20 cubic meters (nearly 5,300 gallons). An enzyme would then be added to make the cells clump together and settle to the bottom. Finally that slurry would be pressed into a cake, put through a grinder, and divided into patties. It would take about a month to make each batch.

A single bioreactor, Tramper calculates, could supply meat to 2,500 people—provided those people ate only ground meat, and no more than an ounce of it a day. Americans eat ten times that, though our consumption has been declining lately.

The process would not grow meat fibers, let alone a steak; van der Weele and Tramper were looking for an idea that could be scaled up with existing technology. It cannot yet be scaled up at reasonable cost, however. The main problem is the special growth medium needed to culture stem cells, which at the moment still requires ingredients like serum from fetal animals.

At current prices for growth medium, cultured meat would cost at least $240 a pound—high even for Whole Foods. "Economic feasibility may turn out to be the greatest challenge for cultured meat," write van der Weele and Tramper.