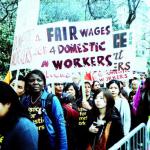 Last summer, Massachusetts became the fourth state in the nation to enact a bill of rights for domestic workers, establishing labor standards and granting basic protections to nannies, housekeepers, and other in-home caregivers. The law, which went into effect on April 1, is broader in scope than similar laws in California, New York, and Hawaii. As other states consider cracking down on what essentially is an unregulated underground economy, Massachusetts’ leadership, by empowering domestic workers, stands out and deserves praise.

The new law is the result of four years of organizing work by the Massachusetts Coalition of Domestic Workers, which campaigned on behalf of the estimated 65,000 domestic workers in the state. The Domestic Workers’ Bill of Rights applies to any nanny, housekeeper, housecleaner, or caretaker — regardless of immigration status — working in a private home, except those who are employed through state-regulated staffing agencies. It does not include casual baby sitters, defined as those who work 16 hours a week or less, according to the proposed regulations filed by the attorney general’s office, which is the state agency in charge of enforcing the new law and investigating violations. The law now requires employers to pay at least the current $9 minimum wage to domestic workers, and to offer benefits such as vacation, sick days, reasonable rest time, breaks for meals, termination rights, and parental leave. It also establishes a process that would enable workers to file complaints in case of discrimination or sexual harassment.

Often referred to as people “who do the work that makes all other work possible,” home workers have been subject to all sorts of mistreatment. Consider the federal au pair program, which was established by the US State Department as a cultural exchange initiative in the mid-1980s. Fair-labor advocates and watchdog organizations say the program has become a cheap nanny agency, due to lax oversight and minimal enforcement by the federal government. The program grants a visa to foreigners in exchange for child care services, with the hosting family typically offering a stipend, an educational allowance, meals, and room and board. But a recent class-action lawsuit and multiple complaints of wage violations have prompted the State Department to admit the program is undergoing a review, which will be completed by early summer.

According to Lydia Edwards, of Greater Boston Legal Services, au pairs in Massachusetts will be covered by the new law, “no matter how they got here or how they were placed,” she says. “If the au pair is ultimately employed and paid by the family and is doing domestic work as part of their placement,” then they’re covered by the new regulations.

After toiling for years in the legal shadows, domestic workers finally have the protection of sensible, humane laws that recognize their essential contribution.