Will the Senate Kill the Iran Deal and Take Us Into Another War? 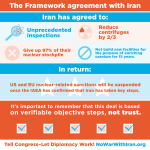 The GOP (with aid from some hawkish Democrats) is intent on killing any possibility of a final agreement with Iran on its nuclear program. They hope to put together a veto-proof majority to pass the Nuclear Agreement Review Act - S.615, introduced by Senators Bob Corker (R-TN) and Robert Menendez (D-NJ), that will torpedo any agreement reached with Iran.

The alternative to diplomacy and a negotiated agreement is WAR!

[Tell your senators to reject S.615 and support diplomacy.]

And that is just fine with Senator Tom Cotton (R-AR). He says bombing Iran’s nuclear facilities would only take "several days" and be nothing like the Iraq War. This happy talk of another "cakewalk" war is exactly what we heard from Bush, Cheney, Rumsfeld and Rice at the start of what turned out to be more than a decade of war in Iraq that killed 4500 US troops, wounded 32,200 others, led to the deaths of more than a million Iraqis, plunged Iraq into a bitter sectarian civil war, and, when all the bills come due, will cost US taxpayers $4-6 trillion.

The Corker-Menendez bill has 21 co-sponsors (eight are Democrats), but by some counts it may already have as many as 66 supporters. It only takes 67 votes to override a President's veto. S.615 will come up for an initial vote in the Senate Foreign Relations Committee as early as this Tuesday.

IT'S UP TO US TO STOP THEM!

Tell your senators to reject S.615 and support diplomacy.

We can win this, but only if we show that our voice is stronger than our opponents'.

Please take a moment to send a message to your senators to make clear that you support the diplomatic road and strongly object to any effort to sabotage negotiations, because the alternative to diplomacy is WAR.

Tell your Senators to stop the Corker bill and restore some sanity to Congress during this unprecedented historical moment in US-Iran relations.