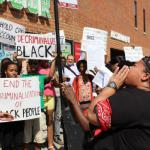 Trayvon Martin. Michael Brown. Eric Garner. Tamir Rice. And now Walter Scott. These names mark iconic deaths — unnecessary, violent ends for black men and boys in America. Often missing from this list but equally important are black women and girls — Renisha McBride, Aiyana Jones or Sakia Gunn — also killed by police or vigilantes. These deaths have provoked wide-scale protests and calls for systemic change: demilitarization of the police; a broader agenda of equality that includes more jobs, better schools and increased political power for the disenfranchised; and more accountability of power holders. With the spread and growth of protests, two questions have captured the public imagination: Will these events lead to a new civil rights moment? If so, where is the next Martin Luther King Jr.?

Both of these questions mistake the present moment and reveal a fundamental misunderstanding of the 1960s. There is a new movement afoot, but it doesn’t need an MLK.

Writing in Boston Review, Brown University’s Glenn C. Loury asserted, for instance, that while “a well-organized movement already existed when [Rosa] Parks refused to give up her seat . . . no such movement exists now.” Contrary to this assertion, a landscape of new, youth-led organizations now populates the political domain. Their tactic of choice is participatory politics, which they pursue through the disintermediating power of digital media for grass-roots organizing. Using an array of tools — from protests to memes to agitprop — they seek to change the public agenda, mobilize the marginalized and advocate policy reforms. A network of loosely affiliated organizations, whose links are growing tighter, has been pursuing racial justice for nearly a decade now, right under the noses of the mainstream media.

Take, as an example, three black women, Patrisse Cullors, Opal Tometi and Alicia Garza, who launched the hashtag #BlackLivesMatter after Trayvon Martin’s death in 2012 and have since built an organization of the same name. These black activists also self-identify as “queer,” an umbrella term used to indicate both a fluid sexuality and a general experience of marginalization and to draw a variety of minority communities into a shared project of activism. Core to their work is recognition that media representations of black people affect the public agenda. One can’t move the policy world without shifting the cultural landscape.

Or take a look at the Black Youth Project 100, a national organization of young black activists with chapters in Chicago; New York; the District; Oakland, Calif.; and New Orleans that mobilizes against state violence directed at black youth. BYP100 promotes a leadership model at odds with the male charismatic leader made famous by Malcolm X and King. These activists also look to black feminism and “queer” political analysis, again focusing on multiple forms of marginalization, to guide their organization and campaigns. They underscore that the civil rights movement, too, was built with the strength of women and queer activists (think Ella Baker and Bayard Rustin), not merely charismatic, heterosexual men.

Or consider Ferguson Action, an organization that sprang up in response to the Michael Brown shooting but whose leaders were initiated into activism after Hurricane Katrina in 2005 and the shooting of Oscar Grant in Oakland in 2009. Yes, Ferguson Action organizes protests, but it also connects those protests to the formulation of specific policy demands for, for instance, demilitarization of the police.

All of these organizations — and others such as Dream Defenders and Hands Up United — make potent use of both face-to-face organizational skills and digital tools, and they are just the tip of the iceberg. So why do journalists have so much trouble seeing today’s organized movement for equality?

First, equality is a more capacious concept now than it was in the 1960s. Each of the groups mentioned here is advocating for black equality but also for gender equality and equality for lesbian, gay, bisexual, transgender and queer communities. Moreover, their work intersects with groups, such as United We Dream, that work on immigration and Latino rights.

Second, if you are looking for a lead organization headed by the charismatic male, you’re not likely to find it. As with the tea party movement on the other end of the political spectrum, decentralization is part of the point. Ferguson Action activists make this explicit: “We are connected online and in the streets. We are decentralized, but coordinated. Most importantly, we are organized.” For young activists, political equality is about democratizing the conversation and decision-making.

Third, we are collectively in the grip of the false idea that digital activism doesn’t matter. But there’s been nothing spontaneous about the Trayvon Martin story, the Michael Brown story or others going viral. In each case, that was the result of hard work. Activists are pushing to change public agendas outside of formal political institutions, and they are trying to do so as much by reforming our implicit biases and instinctive aesthetic preferences as by reforming our policies. Consequently, their work seems less directly connected to political decision-making than we expect of a social movement. But these digital activists work in a venerable tradition. The ancient Greek philosopher Plato knew that if you could change the garden of symbols in which people grow up — that is, their intuitive sense of the beautiful and ugly, of the good and bad, of the fair and unfair — you would change their choices, and therewith the world. What “Black is Beautiful” was to the ’70s, #BlackLivesMatter is for us.

So, no, we don’t need a new movement for black equality. We have one. And it, like that of the ’60s, has set its sights high, this time on a multifaceted conception of equality and also on a thoroughgoing democratization of our social and political culture. One thing’s the same, though. The goal is to be free at last.