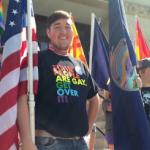 The U.S. Supreme Court’s conservatives don’t like same-sex marriage, and that could mean that the civil rights struggle for LBGT equality will continue for years.

Early in hearing oral arguments in Obergefell v. Hodges, which is consolidated with three other cases on the questions of whether same-sex marriage is a constitutional right, and whether states have to recognize marriages from other states, Roberts said that he had looked up definitions of marriage and it did not include same-sex couples. “You are seeking to change the institution,” he said.

That was followed by Justice Anthony Kennedy, who asked two questions that seemed to telegraph the Court would take a piecemeal approach when ruling. Kennedy said the institution of marriage had been around for “millenia,” referring to traditional marriage. But he also noted the reality that same-sex couples are adopting and raising children, and thus deserved some legal protection.

Kennedy’s comments are being watched because he was the lead author in the court’s last major LGBT ruling, U.S. v. Windsor, which forced the federal agencies to recognize same-sex marriage licenses issued by states. Other right-wing justices, namely Antonin Scalia, followed Kennedy’s cues, asking if any other country recognized same-sex marriage before the Netherlands in 2001.

After a protester interrupted the hearing shouting that “homosexuality is an abomination,” Scalia commented that was “kind of refreshing,” and said that creating new same-sex marriage rights would be “unpalatable” to religious people. Justice Samuel Alito asked whether states that have banned same-sex marriage “seek to demean gay people?”

The court’s liberal minority, meanwhile, pushed back by asking why same-sex couples were being denied equal treatment under the law. Justice Stephen Breyer said that marriage is open to multitudes but not same-sex couples, “And so we ask why?” He asked lawyers to comment on the appropriateness of the Court overruling voter-approved anti-LGBT state constitutional amendments.

Justice Ruth Bader-Ginsburg was flustered that the Court's conservatives seemed intent on defending the institution of traditional marriage instead of looking at the indignities and harms that discriminatory anti-LGBT laws have on same-sex households.

“You are not taking away anything from heterosexual couples” if states allow same-sex marriage, she said. Similarly, Justice Sonia Sotomayor asked how denying rights to same-sex couples fortifies traditional marriages?

The answers from lawyers opposing same-sex marriage have been heard for years in the right-wing culture wars. John Bursch said that if marriage and child-bearing are not related, then more children would be born outside of marriage and that harms society.

Legally, marriage is a state-granted contract that triggers many other rights and benefits under state and federal laws. In that sense, marriage rights are a proxy for all kinds of other societal issues—from adoption and parenting rights, to property ownership rights, to medical power of attorney and inheritance rights, to one’s status for tax filing purposes, and more. While conservatives rail about the harm to family values as they see them, LGBT activists—much like African-Americans in the Civil Rights Movement—know that they have been excluded from many of the legal protections and benefits conferred by the courts, state and federal government.

Literally hundreds of state and federal laws confer benefits to married couples—including seemingly small things such as parents’ names on birth certificates to last names on drivers’ licenses. That backdrop invites a matrix of half-measures that the Supreme Court could confer, even if it validates same-sex marriage. The two big questions in this case are whether states must allow same-sex couples to marry, and whether states must recognize marriages from other states. LGBT activists seek strong, unambiguous, affirmative rulings.

However, the Court could affirm same-sex marriage and still give red states plenty of leeway to preserve discriminatory practices. If, for example, the Court’s majority does not explicitly affirm equal protection, then it would be much harder to challenge state laws that discriminate against LGBT individuals—usually by intentional omission, such as not listing LGBT individuals among the classes of people being granted legal protection from discrimination.

Moreover, the Court’s conservatives could also undermine a holding that same-sex couples were entitled to equal protection by watering down the legal standard needed to prove discrimination in court. That prospect would make it much harder for LGBT advocates, who could win the right to marry, to go further and overturn state laws that prevent full spousal rights.

Similarly, the Court’s conservatives could take a “state’s rights” approach and leave it up to states to work out the details of the implications of recognizing same-sex marriage, which, in many red states would become an invitation to do very little.

What was obvious from the oral arguments on Tuesday was that the Court's right-wing majority was in no mood to embrace full constitutional and legal protections for same-sex couples. That more than suggests that even if the Court approves same-sex marriage rights, it would take years to legally dismantle the many facets of discrimination facing same-sex households.

Steven Rosenfeld covers national political issues for AlterNet, including America's retirement crisis, democracy and voting rights, and campaigns and elections. He is the author of "Count My Vote: A Citizen's Guide to Voting" (AlterNet Books, 2008).