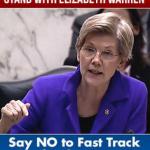 The latest chapter in the feud between Sen. Elizabeth Warren and President Obama over trade is now spilling over into questions of whether the labor provisions of the White House-backed Trans-Pacific Partnership would actually be enforceable.

Obama has said the 12-nation TPP would have strong human-rights, environmental, and labor standards that are "actually enforceable," a roundabout criticism of previous trade agreements.

In a weekly address last month, Obama said that because TPP would include Canada and Mexico, the other two countries in the North American Free Trade Agreement, it "fixes a lot of what was wrong with NAFTA too," attempting to address the concerns of many progressives that previous trade agreements lacked sufficient labor protection.

But Warren, who is one of the loudest critics of the trade proposal, is arguing that Obama's assurances don't carry much weight. The senator's office released a report Monday featuring quotes from officials in both the Bill Clinton and George W. Bush administrations making similar claims about free-trade agreements, as well as similar remarks from the Obama administration about free-trade deals it has made with South Korea, Colombia, and Panama.

When asked about the concerns raised in Warren's report, the U.S. Trade Representative's office forwarded a report released earlier in the year which said that while labor provisions were part of side agreements with NAFTA, the U.S. is requiring countries in the TPP negotiations to provide workers' rights and that labor provisions will be part of the core of the agreement. The USTR also highlighted work the Obama administration has done to promote labor rights in Colombia, Jordan, Guatemala, Burma, and Bahrain.

Warren's document cites findings from the Government Accountability Office that, while there have been some labor improvements in countries with whom the U.S. has made free-trade agreements, there are still widespread problems that the Department of Labor is often too slow to address.

Warren's office also says 10 countries the U.S. has existing trade agreements with still use child labor, citing the Department of Labor. While the USTR highlighted the fact that it had brought the first-ever labor case under a free-trade agreement against Guatemala in 2014, Warren said it only came six years after the initial claim was filed.

Labor leaders in the U.S. have consistently expressed concern about possible lack of enforcement on labor standards. During a Senate Finance Committee hearing last month on Trade Promotion Authority, which would subject trade agreements to an up-or-down vote without the ability to amend, AFL-CIO President Richard Trumka highlighted the killing of workers in Colombia, which has a free-trade agreement with the U.S.

Warren has emerged as the TPP's biggest critic, saying it could dismantle labor and environmental rules and lead to a rollback of financial regulation like Dodd-Frank. Now, in this latest chapter, the White House and Warren are debating how much Obama will actually be able to do to protect workers' rights abroad to keep the playing field level for American workers.