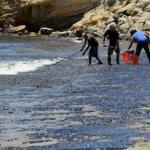 As an investigation into an oil spill along the California coast continued on Thursday, environmentalists described a "nightmare" scenario in the area and new details emerged about the pipeline operator's long history of generating similar disasters.

California Governor Jerry Brown declared a state of emergency late Wednesday over the oil spill near Santa Barbara that may have dumped more than 105,000 gallons of crude along the coast on Tuesday morning.

By Thursday afternoon, wildlife in the area, including pelicans, had been found coated in oil, according to ABC News. One bird was found dead on the beach and five have reportedly been sent to rehabilitation centers.

Clean-up crews shoveled pools of black sludge along the shore and towed booms into the water to fence in the two large patches that had spread across nine miles in the Pacific Ocean. Exactly how much oil has spilled from the pipeline that burst near Refugio State Beach is still unclear.

So is the cause. Darren Palmer, the chairman and CEO of Plains All American, which operates the pipeline, told reporters Wednesday evening that the company had experienced "mechanical issues" before the leak, but did not elaborate.

What is known, however, is that Plains All American has a history of wreaking environmental damage.

Not including Tuesday's disaster, the company has been responsible for 175 spill incidents nationwide since 2006, including 11 in California—the most recent one in 2014, when 10,000 gallons of oil spilled in the Atwater Village community in Los Angeles.

The company's Canadian branch, Plains Midstream Canada, has also had a slew of ruptures in Alberta.

As the Gaviota Coast Conservancy pointed out on Wednesday, the pipeline was the only one in the county to be operating without local oversight.

"The Gaviota coast is a global resource that needs to be attended to with greater respect and restraint," Gaviota Coast Conservancy president Phil McKenna said. "When I saw that first image of oil oozing out of the bluffs, it was a nightmare."

And the Santa Barbara-based Environmental Defense Center posited other unanswered questions, including "why there was no automatic shut-off on this relatively new pipeline, and why the early response was not more successful in halting the flow of crude oil into the fragile waters of the Santa Barbara Channel and across our precious coastline."

Many environmental organizations connected the spill to the environmental dangers posed by offshore drilling in the Arctic, which recently got federal approval.

"Oil pipelines and offshore fracking and drilling endanger our fragile marine ecosystems," Sakashita said on Thursday. "If [we've] learned anything over the past 50 years, it's that coastal oil production remains inherently dangerous to wildlife, local communities and health of the planet. To protect our coast, we need to stop offshore drilling and fracking and quickly transition to cleaner energy sources."

Dr. Chad Nelsen, CEO of the Surfrider Foundation, added, "Sadly, once the oil is spilled it is too late. As we are again learning in Santa Barbara, once the disaster has occurred we can only try to minimize the damage.... We need a strong public response to combat special interests who are constantly pressing for more drilling along our precious coastlines."