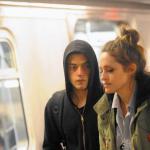 "Mr. Robot," a psychological thriller premiering June 24 on USA Network, hacks into some of today's biggest problems and fears: Cyber threats. Rising wealth disparity. Mental health and youthful rebellion.
The issues have long fascinated showrunner and executive producer Sam Esmail, whose previous projects include writing and directing the feature film "Comet." Esmail cites three developments over the last 15 years that inspired him to create "Mr. Robot."
First was the advancement of technology that spawned the shadowy underworld of computer hackers. Second was the global financial crisis of 2008 that punished Main Street considerably more than Wall Street. And third, the injustices that sparked the Arab Spring uprisings in 2010.
Elliot, an emotionally troubled cyber-security engineer by day and vigilante hacker by night, is the personification of these forces in the series. The character, played by Rami Malek ("The Pacific"), believes "the top 1% of 1%" of the world's elite are "playing God without permission." A dilemma arises when Elliot has an opportunity to strike back at these hidden overlords by destroying a multinational company he's paid to protect.
That client is E Corp, the largest conglomerate on the planet. Luring Elliot into the realm of cyberterrorism is Christian Slater's character of Mr. Robot, the leader of a New York-based anarchist group. If Mr. Robot succeeds with his audacious plan, he'll bring about "the single biggest incident of wealth redistribution in history."
At the heart of "Mr. Robot," Esmail says, are disillusioned young adults hungering for change. And they're able to bring about that change by arming themselves with state-of-the-art computer technology that many older people don't understand.
"The power that a hacker can hold now is much bigger than it was years ago," Esmail says, pointing to the ever-increasing amount of data stored online. "We've handed that power over to people who are brilliant at technology and brilliant at exploiting it."
Cast members include Carly Chaikin ("Suburgatory," "In a World…") as Darlene, a member of Mr. Robot's hacker corps who specializes in crippling computer networks.
Portia Doubleday ("Her," "Carrie") portrays Angela, a close friend of Elliot's since childhood and a possible love interest. The two work together at AllSafe, a cybersecurity firm.
Swedish actor Martin Wallström ("Easy Money III: Life Deluxe," "Simple Simon") is Tyrell Wellick, senior vice president of technology for E Corp. He takes a particular interest in Elliot, who claims to be nothing more than a tech guy.
Gloria Reuben ("The Black List," "Falling Skies") is featured as Krista Gordon, a mental health professional treating Elliot for a personality disorder.
Malek predicts the series "will resonate with a large spectrum of viewers, not just millennials" as they follow Elliot's struggle to act altruistically in a world he's come to hate.
Most humans are cowards who "want to be sedated," Elliot angrily asserts, and most so-called heroes are counterfeit. And as for ubiquitous social media sites, they offer only a fake sense of intimacy.
What's even more depressing for Elliot is that people created this dystopian environment by voting for it with their pocketbooks.
"Despite all his inner demons, he's able to go outside that and do some good, maybe take down a society that he's fallen out of love with," according to Malek. "It just speaks to what we as human beings are capable of when the odds are stacked against us."
Attendees at the South by Southwest festival in Austin, Texas, apparently agree with Malek because they recently honored "Mr. Robot" with the Episodic Audience Award. New York City's Tribeca Film Festival also gave the TV show a boost by screening its pilot episode in April and hosting a panel discussion with Esmail, Malek and Slater.
"It's a very cinematic pilot," notes Slater ("Mind Games," "Nymphomaniac"), who applauds USA Network executives for supporting the series and letting Esmail "be as creative as he wants to be with it."
"They're allowing him to push the envelope and take a lot of chances," Slater says, thus giving the show an edgy feel more typical of independent movies.
Slater says Mr. Robot is able to pursue his illegal agenda during a time of vanishing personal privacy by living "as anonymously and as under the radar as possible." He's also as extroverted as Elliot is introverted.
"It's a yin and yang situation between Elliot and Mr. Robot," Slater explains. "Mr. Robot definitely has plans to blow things up and really make a huge splash and bring down this corporation in the most dark and dangerous way."
Elliot, by contrast, wants to attack E Corp in a "more subtle, safer way."
"If Mr. Robot was completely in charge," Slater cautions, "I think we'd be in a lot of trouble."
Source URL: https://portside.org/2015-06-21/wealth-disparity-hackers-and-cyber-threats-mr-robot