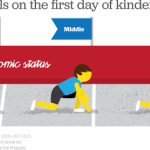 Understanding disparities in school readiness among America’s children when they begin kindergarten is critically important, now more than ever. In today’s 21st century global economy, we expect the great majority of our children to complete high school ready to enter college or begin a career, and assume their civic responsibilities. This requires strong math, reading, science, and other cognitive skills, as well as the abilities to work well and communicate effectively with others, solve problems creatively, and see tasks to completion.

Unfortunately, the weak early starts that many of our children are getting make it hard to attain these societal goals. Since key foundations for learning are established beginning at birth, starting school behind makes it likely that early disadvantages will persist as children progress through school, and last into their adult lives.

Knowing which groups of children tend to start school behind, how far behind they are, and what factors contribute to their lag, can help us develop policies to avert the early gaps that become long-term problems. Inequalities at the Starting Gate: Cognitive and Noncognitive Skills Gaps between 2010–2011 Kindergarten Classmates explores gaps by social class and race/ethnicity in both cognitive skills—math, reading, and executive function—and noncognitive skills such as self-control, approaches to learning, and interactions with teachers and peers. We refer to these skills gaps as gaps in school readiness.

The gaps reported in Inequalities at the Starting Gate are presented as a group’s score on a given skill relative to a comparison group. (Skills are measured in standard deviations—a metric commonly used in education research—with a mean of 0 and a standard deviation of 1. This allows for measuring how far a group’s average score is from the comparison group’s average score and report it as a fraction of one.) For more information on the methodology, sources (the U.S. Department of Education’s National Center for Education Statistics and others), and findings, please visit epi.org to review the full report: Inequalities at the Starting Gate: Cognitive and Noncognitive Skills Gaps between 2010–2011 Kindergarten Classmates, by Emma García, Economic Policy Institute, June 17, 2015.

The paper uses data from the National Center for Education Statistics’ Early Childhood Longitudinal Study, Kindergarten Class, a cohort of students who entered kindergarten in 2010 for the 2010–2011 school year (ECLS-K 2010–2011). The nationally representative sample provides information about the children—their race or ethnicity, socioeconomic status, language spoken at home, etc.—and their experiences in their early years, such as how actively their parents engaged them in enriching activities and whether they received prekindergarten care (see table at right). The analyses focus on the association between these characteristics and children’s readiness for school.

Student and family characteristics of the kindergarten class of 2010–2011

Note: SES stands for socioeconomic status. Among Hispanic children, some do not report their language status (Hispanic children with language reported account for 24 percent of the Kindergarten Class of 2010–2011).

The findings reflect broader societal inequities. As is true of odds of school and life success among Americans today, social class is the single factor with the most influence on how ready to learn a child is when she first walks through the school’s kindergarten door. Low social class puts children far behind from the start. Race and ethnicity compound that disadvantage, largely due to factors also related to social class.

A substantial minority are so far behind that school success will be very hard. Given the large share of children entering our schools from disadvantaged contexts, these findings demand our urgent attention on both economic and moral grounds.

Research has established that growing up in poverty tends to put children behind. Inequalities at the Starting Gate seeks to determine how much social class matters, both absolutely and relative to other factors, such as race and ethnicity. It also assesses how a range of family characteristics and parenting practices, such as family composition, paid care, and enriching activities with parents, influence education gaps between groups of young children.

To understand the influence of social class—parents’ income levels, level of education, and job status—on children’s early development, the study divides children into five groups based on social class and compares the second (low-middle), third (middle), fourth (middle-high), and fifth (high) quintiles or “fifths” with the first (low) fifth.

We use the term social class to refer to the socioeconomic status (SES) construct created for the ECLS-K by the U.S. Department of Education’s National Center for Education Statistics based on five different components, including parents’ (or guardians’) educational attainment, occupational prestige score, and household income.

In line with prior research, Inequalities at the Starting Gate finds that the most socioeconomically disadvantaged children lag substantially in both reading and math skills, and that these skill levels rise along with social class. As such, poor children face substantial obstacles to school success. For example:

Black and Hispanic ELL children begin kindergarten with the greatest disadvantages in math and reading, due largely to links between minority status and social class

To better understand the links between racial and ethnic status and children’s school readiness, Inequalities at the Starting Gate looks at gaps between black, white, Asian, and Hispanic children. Because Hispanics are the largest minority in the United States and also heterogeneous—and thus likely to experience gaps along different dimensions—they are divided into subgroups, based on English-speaking versus non-English speaking status. As multiple prior studies have also found, there are substantial gaps in reading and math skills when comparing white and Asian children with black and Hispanic children, and those gaps can largely be attributed to relative social status:

When assessing students’ readiness to enter school, it is increasingly apparent that researchers need to focus on a much broader set of skills than math and reading. Persistence is as likely as math and reading aptitude to help a student actually finish high school. Effective communication with teachers and peers is also critical to school success, as is the ability to play well with others. These so-called noncognitive skills tend to develop—or lag—in tandem with cognitive skills.

The Early Childhood Longitudinal Study asks both parents and teachers to rate children’s abilities across a range of these skills. Of course, the specific skills measured may vary between the home and classroom setting; creativity, for example, could look different when constructing a tower of blocks at home versus writing an essay in class. Expectations may also vary by context. Teachers likely evaluate their students’ skills levels relative to those of other children they teach. Parents, on the other hand, may be basing their expectations on family, community, culture, or other factors. Nonetheless, all adults report gaps by social class.

Parents’ and teachers’ assessments of the same students’ noncognitive skills vary by race. For example, in simple terms, black children are doing fine on these skills according to their parents but lagging according to their teachers. We don’t know whether this is due to expectations in the classroom versus at home, different measures of these skills in those two contexts, or some other reason. But these disparities between parents’ and teachers’ perceptions merit further research because they may have important implications for policy. And these differences can be striking:

The findings of Inequalities at the Starting Gate study affirm decades of research that connects parents’ economic resources and opportunities with their children’s school readiness. When those resources are limited, children aren’t prepared, cognitively or noncognitively. When those resources are evident, children are well prepared. These unequal starts by race, ethnicity, and, most stubborn of all, social class, emphasize the urgent need to rethink how we design and implement not only our education policies but also our social and economic policies.

Expand access to care and education for disadvantaged families

Research provides guidance on strategies to mitigate poverty-related early skills gaps. Some of these strategies, such as home visiting and other programs that help disadvantaged parents support their children’s development, and access to quality care and prekindergarten, have bipartisan backing by Congress and President Obama. These and other evidence-based policies provide a significant societal return by enhancing children’s readiness for school while also improving parents’ job prospects and productivity:

Given the societal returns from these programs, policymakers at all levels should ensure the needed public investments to expand them in states with strong programs and establish quality programs in other states.

Poverty poses such huge challenges to life success that mitigating its effects is insufficient. If we really aim to close achievement gaps, not just narrow them, we need to have fewer poor kids. As Robert Putnam warns in his recent book Our Kids: The American Dream in Crisis, saving the American Dream requires ensuring not just opportunity but mobility; a child’s life odds should not be determined by her parents’ employment or wealth. And that equality of opportunity cannot exist unless we tackle the severe inequities underlying our findings through policies to boost parents’ socioeconomic status:

The education gaps highlighted in Inequalities at the Starting Gate sometimes narrow as children grow. But they nevertheless represent bleak life prospects that portend serious problems for our society as a whole. If we do not treat them as both the moral and economic crisis they represent, we waste the human capital contributions of groups that have shaped our country’s uniquely diverse, dynamic, and entrepreneurial nature. We share a national ideal that everyone should have the opportunity for prosperity and success. Reclaiming this vision for our children begins with ensuring that all children start school on equal footing.