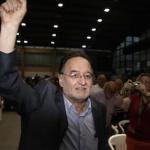 Following the Tsipras announcement of snap elections on Thursday 20 August and the resignation of his government, 25 lawmakers belonging to the left–wing of Syriza said they would leave the ruling party to form a new movement called Popular Unity. The new party will be headed by former energy minister Panagiotis Lafazanis and will run against Tsipras in September elections.

The Popular Unity party becomes the third largest in the Greek Parliament. Lafazanis rejects the austerity demanded by lenders in exchange for the financial aid and voted against the terms of the new deal last week. At that time he told the media that he was determined to “smash the Eurozone dictatorship”. Syriza who won149 seats in Greece's 300-seat parliament in January elections, has seen close to one third of its MPs, oppose the deal reached with the country’s creditors. The hardliners have voted either against the terms or abstained while some members have also argued that Greece needs to exit the Eurozone in order to solve its economic problems.

Economist Costas Lapavitsas, a member of the Popular Unity Party, said to Greek national television that the new party enjoys strong support from the people who feel betrayed by Tsipras' U-turn to save the financial system and Greece's future in the Eurozone. “We want to give a voice to the 62 percent of the people who said 'No' and do not want bailouts” he noted.

Conservative opposition leader, Evangelos Meimarakis, has said that he will “explore all avenues in order to avoid snap elections" and he would try to form a new government with parties from the current parliament. At the same line, Dimitris Stratoulis, one of the founding members of the new Popular Unity Party, told Reuters that his party would also try to put a government together.

Stavros Theodorakis, leader of the small centrist movement, To Potami, said in a news conference that his party wants elections as soon as possible and he does not see the possibility for any political party in the current parliament to form a coalition government without the participation of Syriza. According to Greek newspapers, Alexis Tsipras does not intend to form any new coalition before the election takes place. Tsipras aims to capitalize on his popularity before the effects of the new bail out measures –such as further pension cuts and VAT increases-start to be felt by his voters. He hopes a second Syriza victory will shore up public support for the three-year bailout program and suppress the revolt by hardliners that either voted against the bail out or abstained. A recent poll, published by Metron Analysis late last month, has put support for Syriza on 34%, making it the most popular party in Greece. However Syriza, will probably not be able to form a majority administration and will have to govern with a coalition partner.