New Black Panthers Documentary Tells the Story Behind the Berets 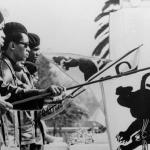 The Black Panther Party for Self-Defense was founded in Oakland, California, in 1966 by Bobby Seale and Huey Newton, two activists with southern roots who had both been involved with the civil rights movement. The pair’s political leanings allied more with the militancy of Malcolm X than the nonviolent methods of Martin Luther King, and a central pillar of their ideology, outlined in an ambitious 10-point program, was the necessity for their community to defend itself, bearing arms, against harassment and brutality by the city’s predominantly white police force.

Though the Panthers launched as a local concern, chapters soon sprang up nationwide against the backdrop of the era’s burgeoning countercultural politics (Vietnam, the student movement); a global confluence of anti-colonial movements; and the toxic social and economic results of de facto segregation. The Panthers offered young, disenfranchised African Americans a sense of refuge and communal purpose.

Jamal Joseph, who joined the New York chapter at the age of 15, recently told me over the phone: “For anyone that wanted to be in a gang, the Panthers were there to say: ‘Well, if you want to be in a gang, why not be part of a gang that’s taking on the biggest bullies on the block? The United States government. The police.’”

Rocking an eye-catching uniform of leather jackets, afros and berets, the Panthers introduced new methods of community activism – most famously their Free Breakfast for Children programs – but terrified the white establishment and faced a tough clampdown. Newton was arrested for allegedly killing a policeman in October 1967 (he spent time in jail, but was later acquitted). In 1968, Seale was also imprisoned in Chicago, while the FBI director, J Edgar Hoover, dubbed the Panthers “the greatest threat to internal security of the country”, and engaged in a campaign of extreme surveillance under the Cointelpro banner.

That same year, the party’s inaugural recruit, 17-year-old Bobby Hutton, was killed in a shootout with Oakland police. In 1969, the charismatic 21-year-old deputy chair of the Illinois chapter, Fred Hampton, was murdered in his apartment by the police in a late-night raid. The party became riddled with informants, was subjected to constant harassment under the aegis of Hoover and incoming president Richard Nixon, and eventually became consumed by internal strife. Joseph argues that the party’s embrace of cross-racial class struggle was central to its downfall: “It got us wiped out, like Dr King and Malcolm X – they were both assassinated at the point that they were both talking about capitalism, class struggle, and all people coming together.” By 1980 its membership had dwindled to a desultory 27.

For such a complex, confrontational and camera-friendly outfit, the Panthers have been surprisingly under-represented on film. Yet intriguing portraits do exist. The great French experimental film-maker Agnès Varda was living in California when Newton was first arrested. His trial was ongoing in 1968, which prompted her to make two nonfiction films about the demonstrations organized in his support. "Huey" captures the militant, celebrity-studded atmosphere of the “Free Huey!” campaign, while "Black Panthers" intimately investigates the local dynamics of the party’s Oakland branch.

While in Algiers to film the Pan-African Cultural Festival in 1969, avant garde artist William Klein made "Eldridge Cleaver, Black Panther", a record of the party’s then exiled, perma-controversial minister of information (who later went on to design a luxury apron-cum-codpiece entitled the Cleaver Sleeve, and concocted his own religious group, “the Guardians of the Sperm”.) Another documentarian, Chicago-based Howard Alk, made 1969’s "American Revolution 2", about the 1968 Democratic National Convention, and the formation of an unlikely alliance between the Black Panther Party and the Young Patriots Organization; and the riveting "The Murder Of Fred Hampton" (1971), which follows the 21-year-old until his unexpected death, at which it point transmogrifies into a furious exposé of police corruption.

The sole major fictional film to address the group’s legend is the entertaining, underrated epic "Panther" (1995), by Mario van Peebles, featuring a screenplay by Mario’s father, Melvin, from his novel of the same name. Melvin had previously directed the grungy Blaxploitation classic" Sweet Sweetback’s Baadasssss Song" (1971), of which Huey Newton was a vocal supporter: “[It is] the first truly revolutionary Black film ever made … presented to us by a Black man,” he remarked, enthralled by its evocation of black self-reliance and swaggering masculinity.

But the Panthers, easily circumscribed by their stylized appearance and unavoidably controversial facets, have more frequently been utilized as thematic punctuation marks in historical documentaries; or reduced to agitprop punchlines in mainstream fare such as "Lee Daniels’ The Butler" (2013), in which the briefly glimpsed Panther character (played by Yaya DaCosta) is portrayed as little more than a petulant poseur with explosively violent tendencies.

A new film, "The Black Panthers: Vanguard of the Revolution", aims to provide a more considered account of the party’s stunningly rapid rise and fall. Directed by veteran African American documentarian Stanley Nelson ("The Murder of Emmett Till", "We Shall Remain"), it was made over seven years, and partially funded by a successful Kickstarter campaign.

“I was 15 years old when the Panthers came into being,” Nelson told me. “I was at just the right age and the Panthers were talking about things that were of concern to me in New York, and in my generation. Plus, they had a whole different look from what we’d seen before. As a film-maker, I just thought that this incredible story – of young people seizing the moment – hadn’t been told.” The Panthers’ extreme youth, at their height, is one of the tale’s most staggering aspects: “Even the people I looked up to as the older brothers and sisters were 19, 20, 21 years old,” says Jamal Joseph. “The average age of someone in the party was probably 20 years old.”

In order to tell the story, Nelson adopts a fairly conventional style comprising chronological narrative, a sharp assemblage of well-researched archive footage, and a vast range of “talking head” interviewees. Though the film exhibits an undeniably pro-Panther stance, Nelson’s inclusion of contributions from historians, journalists and even white former cops helps to foster a rich sense of depth, and adds a measure of objectivity.

One notable absentee is Bobby Seale, who remains a political activist at the age of 78. Nelson told me that he repeatedly reached out to Seale to request his participation, but was rebuffed each time. Another surprising omission is Angela Davis, who was never an official Panther, but kept close ties with the party (“She had her moment, in Shola Lynch’s 2013 film "Free Angela and All Political Prisoners", says Nelson by way of explanation.)

Although the film underplays, or simply ignores some of the Panthers’ less savoury activities – like the 1969 torture and murder of suspected informant Alex Rackley by three members of the New Haven chapter – it is no hagiography. Former Panther organizer Kathleen Cleaver is circumspect in her interview about the party’s open-door recruitment policy and consequent lack of quality control (“We had no idea who these people were!”). Another past member, Ronald Freeman, is wryly ambivalent about the celebrity fans that the party attracted: “Them stars,” he says, referring to the likes of Jane Fonda, “they loved that shit. They ate that shit up.”

The film also candidly addresses the party’s chauvinism, which was persistent and insidious even though the majority of the rank and file were women. “We didn’t get these men from revolutionary heaven,” says former leader Elaine Brown. (Incidentally, Brown has since come out against the film. In an angry tirade for the Daily Beast, she takes issue with its critical portrayal of Newton – who emerges late as the crazed, drug-addled villain of the piece – labels it a “piece of provocative propaganda worthy of the FBI itself”, and concludes with a stinging rejoinder for the director: “My consolation lies in knowing that … history will not remember Stanley Nelson at all.”)  Elaine Brown's article published originally by the Daily Beast will be posted on Portside tomorrow, September 9th, 2015.

And yet, such hotly contested subject matter was always likely to engender fierce debate. It is, however, unarguable that Nelson’s film arrives at an irresistibly resonant time. The director is keenly aware of how events in Ferguson and Baltimore – and the recent police-related deaths of African Americans like Samuel DuBose and Sandra Bland – has shifted the context of how his film will be viewed. “A year and a half ago, it might have been easier for critics to say, ‘Oh, these guys [the Panthers] look crazy, how could they do this?’, and not take it seriously. But I think now they’ll understand – or a lot of people will understand – that the magnitude of police mistreatment of African Americans is real and it’s been going on for a long time.”

The film also works as a powerful thematic companion to a host of recent cultural touchstones. Nelson confesses to being awestruck by the serendipitous timing – one month before his film’s Sundance premiere in January 2015 – of the release of "Black Messiah", the comeback LP by D’Angelo and the Vanguard. In the film, interviewees repeatedly state that the FBI were hellbent on preventing the rise of a new “Black Messiah”, an impulse which ultimately accounted for the preternaturally commanding Fred Hampton.

It also shares DNA with the NWA biopic "Straight Outta Compton" which, despite its indefensibly spineless oversights, offers an uncompromising depiction of the corporeal and psychological realities of racist police brutality; and Ta-Nehisi Coates’ bleak, critically acclaimed book Between The World and Me (“I’m waiting for my turn to read it,” says Nelson. “My father got it for his 99th birthday, and I gave it to my son, who’s 16. It’s being passed around the house.”)

But does the film have the power to transcend the realms of entertaining and informative? Dr Althea Legal-Miller, Teaching Fellow at UCL-Institute of the Americas, thinks so, and sees it as a potential blueprint for contemporary young activists: “Nelson’s film serves as a powerful reminder that building a movement requires sustainable organisational coordination that negotiates the intersections of reform, militancy and radicalism. Today, young activists are relentlessly rebuilding a Black liberation movement, and it is no accident that – like the Panthers before them – they are simultaneously community building through free programmes like Hands Up United’s ‘Books and Breakfast’ programme in Ferguson and Newark, New Jersey.”

Nelson, for his part, is warily optimistic that his film can have a positive impact: “The Panthers story has some pretty clear ‘dos and don’ts’ – I hope that people will understand these and use whatever lessons they can find to help make their movements flower.”

The Black Panthers: Vanguard of the Revolution is on nationwide release in the US from Friday 4 September.

[Ashley Clark is freelance film journalist and film programmer from London, based in New York. He has written for Sight & Sound, Time Out, Village Voice, and VICE, among others; and he has appeared on the BBC's Film show.]