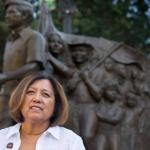 On Sept. 8, 1965, Lorraine Agtang, her family and other Filipino grape pickers walked out of their fields to protest a cut in their pay from $1.40 to $1.25 an hour. Twelve days later, labor organizer Cesar Chavez and more than 1,200 Mexican workers joined the strike that led to the first United Farm Workers contracts with growers in 1970.

This weekend, hundreds of former and current labor activists, both Filipino and Mexican American, flowed into the Central Valley town of Delano where 50 years ago, they launched the Delano grape strike that altered the course of American history.

“I was a kid, only 13,” recalled Agtang, who was born and raised in a labor camp 2 miles east of Delano. “It was midmorning when picketers showed up where we were picking grapes for Giumarra growers and my dad, Platon Agtang, said there’s a strike and we should leave.”

The Sacramento resident, now one of the last remaining Filipino grape strikers, was one of the only women who joined Larry Itliong, the cigar-chomping, fearless labor pioneer, under the banner of his Agricultural Workers Organizing Committee.

Sacramento State professor emeritus Duane Campbell, who worked for the UFW from 1972 to 1980, said the strike “totally changed labor politics and Latino politics.” Inspired by the events of that September and the impact of the international table grape boycott that followed, thousands of people of different races and ethnicities devoted their lives to activism and nonviolent protest.

“It was a training ground for organizers who spread to hundreds of different fields – a large number of Latino legislators worked with the UFW,” Campbell said. “The strike and boycott awakened Latinos, ‘the sleeping giant of California politics,’ triggering the Chicano movement and the creation of bilingual education departments.”

UFW spokesman Marc Grossman said those who can trace their political activism to the grape strike include the late Joe Serna, who went on the become mayor of Sacramento, and the late artist and activist José Montoya, founder of the art collective the Royal Chicano Air Force. Alex Edillor, who helped organize the weekend’s commemorations, called the strike “one of the most significant social justice movements in American history” and praised the courage of the Filipino farmworkers, many in their 50s then, who were brave enough to launch the strike before Chavez and their Mexican colleagues were ready.

When Agtang saw Filipinos on the picket lines, she said, “that affected my life story – I knew the Filipinos were hard-working people not bent on civil disobedience, but it was pretty amazing when I learned they were standing up for what they wanted.”

As a result of their actions, some were beaten and evicted from their homes; others clashed with law enforcement and Mexican strikebreakers brought in by the growers, but they stood strong.

Agtang, whose dad was Ilocano, a Filipino ethnic group, and whose mother was Mexican, said that before the strike, “the growers would pit Filipinos against Mexicans, saying the other group was working harder, so there was always this kind of competitiveness, but what made an impression on me was seeing Filipinos and Mexicans working together for better wages.

“I finally felt like a whole person. Before, I felt splintered.”

At first, some Mexican leaders didn’t want to join the Filipino strikers, Agtang said, but Chavez threatened to go over to the Filipino side. By 1966, Filipinos and Mexicans had formed the still-powerful UFW.

To support his family, Agtang’s father traveled to Stockton to pick asparagus, and Agtang remembers hanging out at Chavez’s house with his daughters.

“There was a lot going on in Delano – the Kennedys came,” Agtang said.

She went to work at the UFW’s headquarters at The Forty Acres and managed the 64-unit Agbayani Village, a home for old Manongs, or Filipino “older brothers.”

Many Filipino men had been brought to California to work in the fields in the 1920s and 1930s and were forbidden to bring wives or marry outside their race until the California Supreme Court struck down the state’s anti-miscegenation laws in 1948. Before Agbayani Village, “many were single men who often died in the labor camps because they had no families to help them,” she said.

After the California Agricultural Labor Relations Act of 1975 established the right to collective bargaining, Agtang said she organized farmworkers from Puerto Rico and Yemen along with Filipinos.

“I was just so happy to see these groups of people working together,” she said.

During the UFW’s 1973 grape strike in Kern County, Nagi Daifallah, a Yemeni grape striker, was clubbed to death by a Kern County sheriff’s deputy in Lamont, Agtang said, inspiring her to take action.

The table grape strike succeeded where others had failed when Chavez, who led a well-publicized march from Delano to Sacramento in the spring of 1966, came up with a stroke of genius – the 1968-1970 grape boycott that spread worldwide.

“The whole key was switching to a boycott that would reduce demand,” said Philip Martin, UC Davis professor of agricultural and resource economics. “It showed powerless people they could do something. It is considered one of the most successful union boycotts ever – 12 percent of Americans said they avoided eating grapes during the boycott, and by 1970, most major grape growers had UFW contracts.”

The workers also won medical and retirement benefits as well as laws banning the use of pesticides that cause skin disorders and other maladies, Agtang said.

Grossman, who joined the movement in 1969 when many workers were still making $1 an hour, calculated that about 400,000 farmworkers are now employed in California, many of them making about $40,000 a year. They no longer use “el cortito,” the 24-inch, short-handled hoe that forced workers to stoop all day to dig out weeds. They also have access to toilets and clean water in the fields.

Before she drove to Delano, Agtang stopped at the bronze Cesar Chavez memorial across from Sacramento City Hall depicting Chavez leading two dozen protesters on a march for justice. One of them is a 13-year-old girl.

“That’s me on the statue,” Agtang said proudly, “and I’m not even dead yet.”