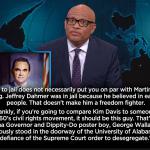 To many in the labor movement, the case of Rowan County, KY, clerk Kim Davis just might have a familiar ring to it. Davis has refused to issue marriage licenses to same-sex couples on religious grounds and ordered deputy clerks to do the same. In effect, she has asserted a right to skirt fundamental obligations of employment-an act that is at the heart of so-called "right to work" (RTW) laws adopted by half of these not-so United States of America.

Not that she's getting away with it. She was jailed for defying a court order. The right-wing is reliably behind her, justifying, as they have with RTW, the refusal of job requirements based on personal belief.

State RTW laws prohibit labor contract language requiring workers to join a union or pay for services the union provides. Regardless of the cost of negotiating and enforcing wages, benefits and working conditions, the union has a duty of fair representation to all workers under the contract, whether they pay for it or not.

Unions just don't happen. It takes a majority vote for workers to get their union certified. Contracts just don't happen either. They come about in typically tough negotiations, evolve over time, and, in non-RTW states, routinely include "security" provisions for dues or fees that enable the union to fulfill its duties.

Additionally, union members have the right to participate in union governance, which may include setting the bargaining agenda, ratifying labor contracts, voting on union rules, and more. Ultimately, the contract, including dues or fees, is the product of workplace democracy.

Come RTW, however, and we see the spectacle of spinmeisters in rapid-fire F-bombing claiming an individual "freedom" to (let's face it) freeload.

"This freedom-to-work legislation will give workers the freedom to choose whether or not they want to join a union," said Governor Scott Walker as Wisconsin debated RTW. Actually no one is forced to be a union member, and, absent state RTW laws, federal law permits unions to collect fair share fees from nonmembers in jobs the contract covers.

"Worker freedom is on the march," declared Brett Healy of the conservative Maciver Institute, gushing over RTW victories in various states.

You get the idea. And we see the same kind of rationale now about Kim Davis.

"I think you should be able to keep your job and follow your conscience. I absolutely do believe people have a First Amendment right, a constitutional right."-Governor Bobby Jindal (LA)

"While the clerk's office has a governmental duty to carry out the law, there should be a way to protect the religious freedom and conscience rights of individuals working in the office."-US Senator Marco Rubio (TX)

"Kim Davis is a prisoner of her conscience, if you will."-Davis Attorney Mat Staver

There's a difference between RTW, which limits agreements between workers' unions and employers, and First Amendment restrictions on government in matters of religion, speech, expression, association and so on. For conservatives, though, rights are rolled up into one, giant "freedom" ball aimed at imposing individual beliefs at the expense of democracy right down to the duties of a job. Who then are the prisoners of conscience?

Millions of workaday folks around the US understand that, to be gainfully employed, they must either meet job requirements or find work elsewhere. That's why you don't see Amish astronauts, Muslim pole dancers,  Hasidic Jews doing buzz cuts, or vegan animal lovers selling leather whips to lion tamers. That's why a pro-labor, buy-American atheist trucker who wants to earn a buck will deliver Chinese-made bibles to union-busting Walmart.

So, what are the chances RTW/Davis fans support the rights of the rest of us? My guess: about the same as finding cocktail wienies in an ashram.

[Kathy Wilkes is a longtime labor activist, writer and editor; a union co-founder; and a former union organizer, officer and communications director.]

"I can't let those gays get married because of my beliefs." No one cares about your beliefs. The whole point of a government job is to not give a damn. That's the whole point. That's why you work for the government.

WIMMORE: I don't know about you guys, but when I see a group of people from the South with white crosses cheering to not allow people their constitutional rights, it kind of just gives me a tingly, lynch-y feeling.

Listen here to the full segment, from this past Tuesday's (September 8) The Nightly Show with Larry Wilmore 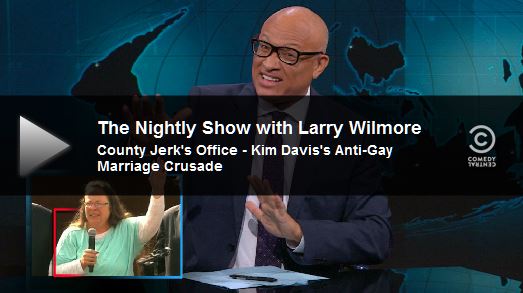