The Fate Of The Union 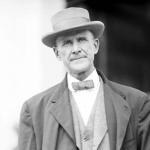 Redio program: What happened to the workers' fight for fairness in America?
When it comes to the politics of work in America, the times, they are a-changing. Scott Walker overtook Wisconsin, the one-time capital of organized labor, with a divide-and-conquer strategy — now he’s chasing votes on an anti-union platform. Bernie Sanders, once the lonely leftist in the Senate, has won over working people with straightforward talk of socialism. Union membership is way down since the 1980s, but public opinion of unions is rising after the 2007-8 crash.
We’ll begin a three-part series, produced in partnership with The Nation, on the state of work in America today with a little history. It’s a contradictory story of a century marked by incredible change, of a great boom and then a slow bust of labor power that brings the story current and into the presidential campaign of 2016.
In 1900, a railway fireman turned organizer and politician named Eugene Debs — the hero of Bernie Sanders’ youth — looked out at his country and declared: “Promising, indeed, is the outlook for Socialism in the United States… No sane man can be satisfied with the present system.”
When Debs was writing, 10 percent of Americans owned 75% of the wealth. (That number is back up to around 76% and rising now.) The average annual wage was $438 (about $12,000 in today’s dollars), the industrial work week ran almost to 60 hours, and child labor was still a fact on factory floors.
So individual workers and craft unions combined to form groups like the Congress of Industrial Organizations and American Federation of Labor which organized sit-down strikes and boycotts and nonstop political pressure. Debs himself would go on to win almost a million votes for president at the top of a socialist ticket — against war and for workers’ rights. In short, throughout the 20th century, organized labor — and worker protest — was a central feature of American life.
The question, then: what happened — between Roosevelt and Reagan, between the UAW and Uber?
Our guide, the historian Steve Fraser, presents an important version of that history in his new book, The Age of Acquiescence. It’s the story of a resistance movement to the market’s hard edge that collapsed under attacks and also under its own success. It was a populist politics that was caught up and co-opted by the institutional Democratic Party, and recast as consumer freedom — the liberty to buy — that replaced collective political action.
Underneath the story of the collapse of the American labor union there’s a pressing story for today about what work means in this country — then and now — and how our politics makes room, or doesn’t, for the people who wait tables, clean, cook, and take care of children and the elderly. It’s a story full of surprises and twists and lessons for the bosses and the laborers who still power our economy, and always will.
This show begins a three-part series about American work: what it is, what it could be, and where we’re all going together. Let us know what you make of your own work, how you look at labor unions in 2015, and what you’d go on strike for.
Source URL: https://portside.org/2015-09-14/fate-union