What Obama Can Do About Dark Money in Elections Right Now 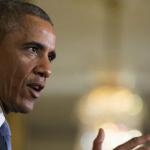 The spectacle of the 2016 election is riveting, that's for sure. But behind the gaffes and rallies -- and hair -- there is something different, and deeply disturbing, about this election.

To a degree unseen since the Gilded Age over a century ago, money will come from a handful of donors giving once unimaginable sums. Many want something from government.

And many of these donors will operate undisturbed -- their identities secret from the public, if not from the grateful politicians. It's called "dark money."

Since 2010's Citizens United decision, outside groups that conceal all of their funding sources from the public have spent more than $600 million to influence elections. We don't know where the money comes from. And we don't know what the donors hope to get in return.

With a stroke of his pen, President Obama can help address one particularly troubling area of dark money spending. He can issue an Executive Order requiring major companies that are awarded federal contracts to disclose all of their political donations.

Each year the federal government awards hundreds of billions of dollars in private sector contracts, much of it to just a handful of companies. And those companies in turn donate tens of millions in disclosed contributions -- along with an untold amount of dark money.

President Obama has spoken out against the toxic influence of dark money. In his most recent State of the Union address, he said, "A better politics is one where we spend less time drowning in dark money for ads that pull us into the gutter." I agree with the president. I'm sure you do too. Now is the time for him to move beyond words, and take this critical step.

While disclosure of federal contractors' political spending wouldn't fix all money in politics problems, it would ensure that hundreds of billions in taxpayer dollars go to companies best equipped to do the job -- not those that make the biggest political donations.

Americans deserve to know if a donation has influenced who receives a government contract. And they deserve to have the information needed to hold elected officials accountable.

This may be the president's last opportunity before the 2016 election to combat the increasing, and overwhelming influence of big donations over our elections and our political system. It is vital that he act.