HBO’s All the Way Delivers a Kinder, Gentler LBJ 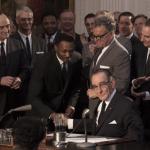 The film version, which premiered in Austin at the LBJ Library last week downplays the younger, more ambitious and mean-spirited LBJ, who was not above stealing an election. It eschews how Johnson exercised legislative power and was master of the U.S. Senate. Nor does it consider that as vice president under President John F. Kennedy, Johnson was often humbled, humiliated and disrespected. Historian Robert Caro reports that some Kennedy staffers nicknamed him “Rufus Cornpone.”
When Johnson becomes “an accidental president,” as he says in the film, on that fateful day in Dallas when Kennedy was assassinated, we witness the second coming of LBJ. He is back in his comfort zone. “I’ve got eleven months ‘til the election to establish myself as the man the people have chosen to hold this office.”
To accomplish this Herculean task, he plans to pass a civil rights legislation with teeth. “You can tell that liberal crowd of yours,” he confides to then Senator Hubert Humphrey, later his vice-president, “I’m gonna out-Roosevelt Roosevelt and out-Lincoln Lincoln. But they need to get behind me and back me up ‘cause you know Dick Russell and the Dixiecrats are gonna fight me tooth and nail on this Civil Rights stuff.”
How he accomplishes this and works with the black civil rights leader, Martin Luther King Jr., form the crux of the film’s riveting first hour.
Perhaps the one constant that remains from this stage to screen version is Bryan Cranston, who played Walter White, a high school chemistry teacher turned criminal mastermind in Breaking Bad. In All the Way, he reprises his Tony-winning role as a backwoods Texas teacher turned political mastermind.
Cranston as LBJ delivers a master class rendering of how political power can work. One moment he is wheeling and dealing, the next pressuring those against him or those beholden to him, asking for favors and collecting debts. He is ruthless, conniving and ferocious — and, when required — a liar. He embodies Johnson from the inside out — elevator shoes and ear and nose prostheses notwithstanding — and brings forth a Johnson who would be president on his own terms.
The same can’t be said of the slew of historical walk-ons from Lady Bird (Melissa Leo), Senator Hubert Humphrey (Bradley Whitford), Martin Luther King Jr. (Anthony Mackie) and Senator Richard Russell (Frank Langella), who aren’t given enough screen time to invest their characters with personality or power. They serve mainly as perfunctory foils, or foes, to what is basically Cranston’s one-man show.
A few crucial historical figures are missing in action: Attorney General Robert Kennedy, Republican presidential rival Barry Goldwater and the upstart George Wallace. These politicos are only off-stage presences or ghostly images in black and white TV newsreels. It might have been a guilty pleasure to see LBJ tell Robert Kennedy, in a moment of comeuppance, that he will not be Johnson’s vice-presidential choice, or see John Wayne, Ronald Reagan and the Shakespearean actor Raymond Massey deliver their TV endorsements for Goldwater.
Schenkkan may believe his Johnson is a tragic character not unlike a King Lear, but he was more Dickens than Lear. In the play, its most revealing scenes have Johnson confiding, in homespun soliloquies, about the dirt-poor boy who received his political education and sense of morality from his childhood hero Franklin Delano Roosevelt and his Texas mentor Sam Rayburn. In the film, these are delivered in dialogue in front of the White House press corps, and they comprise the few moments when Cranston seems to speechify.
“My first year outta college the only job I could get was teachin’ first grade in a beat up old elementary school in Cotulla, Texas, a dusty border town in the middle of nowhere, full of wetback Mexicans who didn’t have a pot to piss in,” LBJ says. “But God, did I love those kids of mine. They would show up every mornin’, dirty, ragged, and hungry ‘cause most of’em hadn’t had breakfast but they were so on fire to learn, it just made you feel good.”
While revealing a gentler, kinder Johnson, Schenkkan fails to acknowledge that LBJ paddled these children for speaking Spanish on the playground. And any Texan, especially LBJ, knows that Cotulla isn’t a border town. Its ethnic majority are hard-working Mexican Americans who have lived there long before the Johnsons came to Texas.
The second hour focuses on the issues and crises that challenged Johnson’s political savvy and acumen. Vietnam rears its presence when the Gulf of Tonkin incident occurs months before the Democratic National Convention. A month earlier, three Freedom Summer volunteers go missing and are later found murdered. And weeks before the election, LBJ’s trusted advisor Walter Jenkins is arrested and charged with disorderly conduct with another man in a public restroom. When Lady Bird insists they need to show support for their friend, Johnson retorts: “He was our friend and then he stabbed me in the back.” So much for the compassionate LBJ who wanted to do the right thing but was all too often trumped by the politically ambitious LBJ.
One comes away with a certain amount of empathy for Johnson as a leader, as a man of tremendous resilience but also one plagued by self-doubt and pain. Then, LBJ’s self-pity and the hagiography kick in: “People think I have no feelings but they’re wrong. You know what I think it is? People think I want great power but what I want, is great solace — a little love. That’s all I want.”
At the LBJ Library in Austin, visitors can pose with an animatronic LBJ in his familiar button-holding squeeze. Standing next to the 6 foot 4 figure, you sense just how tall and imposing LBJ was in real life — even without the white Stetson that All the Way insists he wear.
Gregg Barrios is a playwright, poet and journalist. He serving in the USAF during the Vietnam era. He joined the Vietnam Veterans Against the War while attending the University of Texas in Austin.
Source URL: https://portside.org/2016-05-22/hbos-all-way-delivers-kinder-gentler-lbj