`Can We have a Liberal America Without Unions? History Says No.' - The Right-to-Work Coup in Michigan 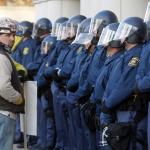