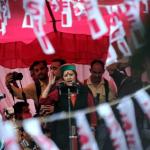 The New Democracy party now amplifies social tensions amidst a toxic mixture of neoliberal and reactionary policies and outlandish conspiracy claims. SYRIZA is the only force in the country with the political capacity to overmatch the far right that has been coming to power elsewhere.

People’s mobilisations and the growing unity among a range of organisations working among the kisans [farmers] and workers that have forced political parties to recognise the discontent brewing across the country and all have now started speaking about the issues raised by these mobilisations.

Japhet Moyo was seized exactly a week after the Zimbabwe Congress of Trade Unions called for a stay-at-home strike to protest a “provocative” 150 percent fuel price increase.

While focusing on the concrete questions that define the material welfare of the working class: labor struggles, increasing the minimum wage, energy poverty, rent controls, etc., Podemos also seems to have put to one side all the rhetorical and symbolic strategies associated with populism, which at one time defined the party.

Starting in the 1990’s, a group of activists started new women-only unions to compete with the official unions and advocate for their members’ rights at work and in society.