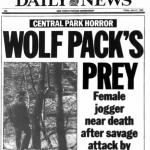 Byron Allen, an African-American entrepreneur, is suing Comcast, the nation’s largest cable company, for race discrimination over its decision not to carry programming from an entertainment company he owns.

Unreliable information circulating rapidly through an ecosystem of fringe outlets without even the appearance of due diligence.

Avaaz reported over 500 far right and anti-EU pages and groups to Facebook, which were followed by nearly 32 million people and generated over 67 million “interactions” (comments, likes, shares) in the last three months alone.

"Job displacement is being driven at the speed of digital technology, which is explosive at this moment. And displacement is the business model for the AI geniuses and all those companies. All of them are hoping to get rich by displacing workers, not by creating jobs."

Media workers are starting to see themselves as akin to striking teachers, as in solidarity with the workers of the Fight for $15.

‘When They See Us’ Highlights Media Failure

Ava DuVernay’s harrowing retelling for Netflix of the false conviction of the Central Park Five, has reignited discussions about race, stereotypes and America’s penal system. Yet this conversation would be incomplete without a serious reckoning with corporate media’s role in fanning the flames of racist hysteria and misinformation.

Dear Editor: No to War!

New York Times readers call out the newspaper for abetting war against Iraq and now Iran.