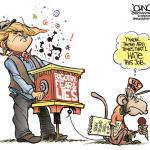 When NPR Is More Dangerous Than Fox News

Throughout America’s mainstream media, there's a consistent failure to exercise “cognitive empathy”—to see the world from Iran’s point of view and so, for example, understand that Iranian moves that America considers offensive and provocative Iran may consider defensive. Failing to do this elementary exercise can lead the United States to exaggerate the threat Iran poses, which in turn can lead to war.

It is true that right-wing media outlets like Fox News are dangerous as propaganda arms of the Trump presidency. But mainstream journalists who distort reality by prioritizing balance over truth are also complicit.

Someone Accused Trump of Rape. The Media Shrugged

Why the relative quiet around E Jean Carroll’s allegation? Is it sexism? Outrage fatigue? Journalistic cowardice? All of the above?

“It is not surprising that a company without female leadership acquiesces to a workplace where discrimination thrives and fails to take appropriate measures to ensure that these issues are taken seriously and appropriately addressed when raised.”

Deepfake technology undermines any hope of once again conducting national conversations on the basis of observable reality.

The court ruled that First Amendment protections don't apply to a corporation that operates a public access channel in New York.