Beyond the MOA: PSC’s Path Forward 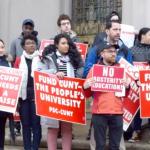 Over the last several weeks there have been many conversations about the Professional Staff Congress’s (PSC) new Memorandum of Agreement (MOA). There is a vocal campaign urging members to vote No, since the MOA fails to provide the advocated $7,000 per class or indeed even guarantee a living wage for adjuncts. There is also a strong defense of the proposed contract, which leadership notes is historic in that it breaks from pattern bargaining and provides the largest salary increase for adjuncts in union history. Yet the polarized nature of these conversations fails to capture the complexities of the contract, and more damningly it misses the larger political battle: returning CUNY to its roots as a public university, breaking the grip of Albany and the elites who benefit from imposing an austerity system on us. Even had the MOA achieved $7k a class, this larger goal would still be far in the distance. Transforming CUNY into a fully funded People’s University will require both a fundamental shift in the union’s strategy and stronger union-wide solidarity.

The two of us spoke jointly at the PSC Delegate Assembly and are writing in concert because we share an analysis about the PSC’s new MOA, which we remain deeply conflicted about, on which one of us voted yes and the other voted no. We write together to articulate a nuanced analysis of the MOA and offer suggestions and critiques in the spirit of moving forward together, even amidst difference.

The MOA contains provisions impacting the full scope of titles within our complex bargaining unit, from various levels of full-time faculty, to Higher Education Officers, to Clinical Lab Technicians, and more. While a complete overview of the agreement is outside the scope of this brief essay, here we offer our analysis on what we see as the main themes of conversations about the proposed contract.

Yet to be stuck in this disagreement keeps us from developing better strategies and building the power that both sides agree is crucial. Whatever happens with the MOA, the same struggle comes next: building our power outside the table, through the rank and file. This is why disagreements about the MOA are not insurmountable ones. Regardless of the MOA’s success or failure, the next move forward is to organize towards building enough power to leverage the larger CUNY community to demand transformative change. We must develop a radically different strategy from that of our current leadership. We must also embrace a diversity of tactics and authentically engage membership in their goals and ideas, rather than using a push for a strike as a replacement for analysis and power-building.

The first strategic shift the union must make is in opening up decision-making processes and conversations. In this regard, the choice to engage in closed bargaining was a critical mistake. In future bargaining sessions, leadership should have members present at the table throughout the contract campaign and regularly report back, engaging with members around the progress of bargaining. This would demonstrate greater power at the table, and encourage ownership of bargaining among members including around difficult choices being posed; perhaps, for example, avoiding some of the anger generated by decisions like the loss of salary steps. The decision to conduct closed bargaining exacerbated a lack of trust in leadership and left many members feeling alienated and powerless. In the post-Janus era, unions must cultivate an engaged membership, which means empowering members to take control over the union’s direction forward, developing diverse strategic approaches and tactics.

We present some specific suggestions about how to move ahead:

These are just some ideas that can serve as a starting place from which to continue building. Most crucially is that rank and file members should be encouraged to become active, take initiative and think creatively about actions and activities they can take leadership over, rather than have members fall into lock-step with others’ ideas or actions.

Our colleagues who support the contract must understand that this is not enough, just as our colleagues who are against the contract must understand that the fight doesn’t stop here; both groups must recognize that we need each other to move forward. A Yes vote should not be seen as a full endorsement of the contract, but rather a qualified one. A No vote should not be seen as naive rejection and betrayal but rather reflecting a difficult decision about the path forward. As we look towards the future we need to build more robust, participatory, comprehensive public campaigns, including but not limited to strike readiness, that amplifies our power outside of the bargaining table. We need to keep building the solidarity and power to win parity for adjuncts, equity across the board and the CUNY we believe in for ourselves as workers, for our students, and working class communities of New York.

Lynne Turner is a doctoral candidate in Sociology at the CUNY Graduate Center who teaches Sociology at LaGuardia Community College and Labor Studies at the School of Labor and Urban Studies. Prior to her doctoral studies, Lynne was a longtime organizer, campaigner and educator within several labor and labor-community organizations. She is currently on the executive committee of the Graduate Center chapter of the PSC, an active member of the Committee of Adjuncts and Part-timers and a coordinator of the CUNY Adjunct Project.

Rosa Squillacote is a doctoral student in Political Science at the CUNY Graduate Center. She has over 10 years of experience in criminal justice policy, which is the field of her research. She is a graduate of Hunter College and has been working as an adjunct there since 2012. She is on the executive committee of the Graduate Center chapter of the PSC. She is also the mother of two toddlers, and very tired.