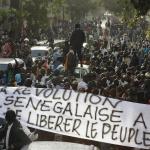 A section of young protesters opposing the current military regime in Myanmar has turned sympathetic to the Rohingya cause. More than 750,000 Muslim Rohingya had fled the Buddhist-majority country following the 2017 ethnic clashes.

An online solidarity movement is bringing together democracy activists throughout Asia for a fight against authoritarianism. But how much difference can a popular hashtag actually make?

Cuba and Venezuela are beleaguered states that have been shoved into economic and political morass, but they are showing Latin American nations how to unite and forge ahead.

Rather than listen to the demands of the largely peaceful protest movement, the government has set out to crush it using all the means at its disposal: arbitrary arrests, the use of live ammunition, and the deployment of marauding militias.

47 opposition activists and former lawmakers were charged with violating Article 22(3) of the national security law. The attention generated by the proceedings has been unprecedented.

Traverso, a historian specialising in totalitarianism and fascism, discusses the intensification of the Islamophobic offensive and questions the notion of ‘Islamo-leftism’, used to delegitimise in advance any solidarity of the left with Muslims.

The revolutionary spirit during the Arab Spring was reflected in songs and chants full of anger, frustration, hope and humour of those who took to the streets.