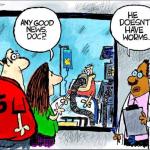 By Colin Leys
The BMJ

Positioning the next stage of the pandemic as a matter of “learning to live with” covid-19 suits those who do not want to be held accountable for what has happened.

GOP Governors Abbott and DeSantis declare that covid-bearing migrants are crossing our border en masse. This has been widely debunked, but the story is what matters: covid and migrants as joint infestation.

J.D. Vance named Kamala Harris, Pete Buttigieg and Alexandria Ocasio-Cortez, and proclaimed that the “entire future of the Democrats is controlled by people without children.”

Survivors of trafficking were frequently held up as natural opponents of sex workers’ rights, and decriminalisation was tarred as a selfish pursuit that would also decriminalise trafficking. Neither of these things were true.

The Costs of Kentucky’s Opioid War

By Tarence Ray
The Baffler

Contradictory attitudes toward drug use lay bare a reality: drug use has no intrinsic meaning but is instead a social relation. We ascribe meaning onto it based on the political and economic realities of our times.

Thomas Merton Center co-founder Molly Rush posted a meme on their website. Then she became a target of charges of racism from the Center’s mostly white inner circle.

The overwhelming effect of watching Bezos and Branson go to space is a sense of triviality. There is no sense of mission here, and barely any sense of occasion, beyond the personal fulfilment of those involved.

A school board in Wisconsin opted out of a federal program that would give free meals to all students. The assistant superintendent for business services worried that there would be a “slow addiction” to the free meals.

If we browse the gossip sections of 21st-century newspapers, we no longer see a sparkling world of nobility and celebrity. Instead, we find ourselves in the boardrooms of major corporations.