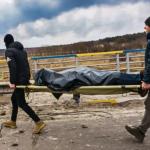 [Below are responses from readers to the statement of the U.S. Peace Council on Russia's Military Intervention in Ukraine. Portside seeks to provide a variety of viewpoints, some of which we do not agree with. The common set of principles of Portside are spelled out in our Mission Statement. - moderator]

I respect that you all share different left viewpoints on the issues of the day. But this is anti-imperialism for fools. This piece from In These Times would make a good counterpoint.

"Facts Over Ideology, Peace Over War"

The USPC's "demands" are precisely the Putin government's negotiating terms.

Are you serious with this? The US Peace Council looks like some stalinist front. This is a bunch of garbage, even assuming that NATO should not have been expanding. There was no imminent threat to Russia. Nothing justifies the attack, or the nature of it.

This is a clear example of Putidiocy, putting the “Peace Council “ solidly behind the Russian aggression. The notion that Russia is defending itself from a Ukrainian attack on Russia is bizarre looking glass nonsense and promoting this Russian propaganda line undermines the real peace movement. The Russian regime is in no way leftist or anti-imperialist, so support for it is just support for an alternative imperialism. Remember that Putin claims that Ukraine is not a legitimate country because, he says, it was created by Lenin and the evil Bolsheviks to weaken the Great Russian nation.

Why is Portside publishing this utter crap?  I know it fosters a diversity of opinions on the Left, but it is political and morally offensive.

Is this a joke? How is this material of interest on the Left?

This is pitiful. For all its listing of various factors in this conflict, it fails to find the principal contradiction, between Russians occupying parts of Ukraine and Ukraine's defense of their sovereignty. Worse, it presents Russia as the one employing 'self-defense' by bombing and killing a country that did not invade them, whatever their differences.

The best I can say about it is the authors are caught in a time warp, thinking today's Russia, governed by someone who trashed Lenin and resurrected Denkin and worse, is the old USSR. Putin made his point clear to all. Ukraine is part of Russia, and anyone there opposing that notion is to be suppressed.

I think this era in Europe is most closely identified with the inter-imperialist wars in the years before 1917 when the left split into Socialist and Communist movements (each going by many names) over the Socialists’ support of their national bourgeoisie and its side of the war.  But on the Communist side as well there were repeated splits not only over domestic strategy, but unfortunately over balancing the national interests of the first socialist party with State Power and the international interests of the communist movement as a whole.  The difficulties and excesses caused and intentionally exacerbated by the Soviet Government and later other imperfect Socialist states, produced distortions of global communist policies in some areas but, when national and international interests overlapped (such as the anti-colonial struggle), an important strengthening of the left’s abilities in the struggle.  Many of these imperfections were produced, as Lenin presciently described, due to the emergence of Socialism in countries which were the weakest link in the capitalist chain.  Marx had theoretically described the emergence of Socialism in the most advanced capitalist countries with substantial experience with Bourgeois democracy.  Though, as a global left, we are more sensitive to these issues today, this problem with those countries with socialist governments, and imperfect democracies, continues today with variable national balances between authoritarianism and democracy.

But this is not the objective reality after the counter revolution in the Soviet Union in the 1990s,  led by, as it was after the Civil War in this country, criminal elements in league with government corruption.  The theft of the state sector of the economy by private enterprise left the people of Russia with little democracy and none of the wealth they struggled for 70 years to share socially.  So certainly, this previous confusion as to the essence of Soviet State Policy cannot serve as an excuse for a confused left response to the current Russian war, in violation of Marxist Leninist Principals and with colonial overtones.  This war no matter how much land is secured by Russia, strengthens of the unfettered hand of the US and NATO, as well as poses a danger to Cuba and Latin America by its theoretical support for the imperial Monroe Doctrine.

It is a shame that an organization with a noble history such as the US Peace Council should defect from the people’s struggles for increased democracy and socialism when they are most needed.  It violates its obligations to the peoples it hopes to speak for as in this electronic age we all see who is being bombed and who is doing the bombing as well as whose tanks are in whose suburban streets.

An excellent analysis -- but I have not seen much activity from the Council for a long time.