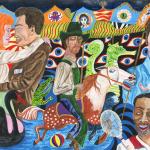 Videos That Won a Union at Amazon

Staffers at Condé Nast announced that they are forming a company-wide union with the NewsGuild of New York, covering more than five hundred staffers across a dozen titles. Staffers at The New Yorker, Wired, Pitchfork, and Ars Technica are not covered as they are unionized already.

Taking the Internet Back

The problem with productivity tools is that they tell you how to work. They have structures and systems, specific ideas about design and non-fungible opinions about How People Get Stuff Done. That’s why so many productivity geeks end up using pen and paper: There’s nothing digital that’s nearly as adaptable to the way we work.

A Long Look At Fox News

There are four elements outside of Murdoch that make Fox News a uniquely damaging part of the American news landscape: its strength on the political right, the demonstrated way in which it shapes its viewers’ beliefs, its grip on Republican power and the views of its leadership.

A Peculiar Hire For CBS News

The network has hired Trump’s former chief of staff Mick Mulvaney, a multimillionaire.

Russia   By Ilya Yablokov, The Conversation

Oscars: Look Back in Anger

The audience on social media engages in Frustration Discourse as they watch loser-winners grapple with their moments of professional glory on live TV, all so ABC can continue to exist in a world that has left it behind. It’s also a world in which actual movies have become marginal, especially during the Oscars.

Over the last few years, journalists’ annoyance at the elevation of reader response in the discourse has evolved into hand-wringing over the future of liberalism. The commentators aren’t just filling our inboxes, they are threatening the Enlightenment and free discourse.

The Ideology of Crypto Hype

Hardcore enthusiasts argue that crypto will get people to trust in technology rather than government, which they see as inherently untrustworthy. This ideology leads people to encourage its use while downplaying its risks.