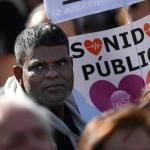 The ecological transition needs to make sense for workers everywhere. A conversation around uneven and combined degrowth can actually improve demands for socially necessary, good green jobs and the kind of living arrangements that communities may desire — if, that is, we centre our strategy on alternative frameworks of sufficiency, solidarity, and justice.

International humanitarian trade union solidarity, such as the major efforts to support workers in Ukraine, Myanmar and elsewhere, is part of a broader framework of union efforts to build and sustain peace and to avoid conflicts and rebuild in their aftermath. This Freedom Report and its case studies remind us of the critical role unions play in opposing conflict, authoritarianism, and oppression.

Despite calling for liberation and social justice, activist spaces are far from immune to aspects of patriarchy and its toxic effects. Female activists in Kenya frequently suffer from mental stress and burnout as their contributions are taken for granted, their work goes uncredited, and their voices go unheard.

Ortega and Murillo continue to scapegoat political prisoners as “agents of the Empire”, cracking down on any form of civic activity independent of their regime’s structures. This even includes Sandinista organisations such as the Association of Retired Fighters of the Sandinista People’s Army. Imprisoned former FSLN leader Dora María Téllez is on hunger strike.

The notion of who are criminals has been reconfigured under ANC leadership. Criminality is no longer an isolated activity of a criminal class, but is now part of being in the political class or leadership that grants opportunities to steal and commit a range of other crimes (and this is not restricted to the ANC, although other parties have had less access to the levers of power).