Disaster in the Philippines - How You Can Help (three items) 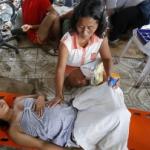 Images of the swath of devastation wrought by Typhoon Haiyan in the central Philippines are reminiscent of the tsunami's aftermath a decade ago in Banda Aceh, Indonesia.

And indeed, the World Health Organization grades the great typhoon of 2013 as a category 3 disaster - its most severe category.

"The scale [of the typhoon's damage] is huge," Dr. Richard Brennan of the World Health Organization tells Shots. "It's monumental. This is one of the biggest emergencies we've dealt with for some time."

Brennan, the WHO's director of emergency risk management and humanitarian response, ticks off the grim metrics:

There's little doubt that Typhoon Haiyan (known in the Philippines as Typhoon Yolanda) will go down as one of the deadliest and most destructive weather events ever recorded - a triple whammy of surge, very high winds and torrential rains. 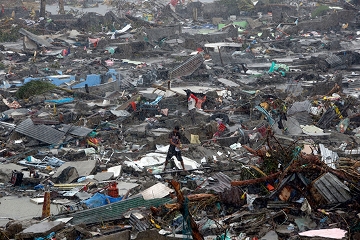 [Doctors Without Borders/Médecins Sans Frontières (MSF) emergency coordinator in the Philippines Dr. Natasha Reyes describes the devastation brought by Typhoon Haiyan and what the medical needs are now.]

"Right now we're operating in a relative black hole of information. We know from the very little we can see that the situation is terrible. But it's what we don't see that's the most worrying. The reports we're receiving from Tacloban are that the entire city of 400,000 people has been devastated.

But there are hundreds of other towns and villages stretched over thousands of kilometers that were in the path of the typhoon and with which all communication has been cut. To be honest, no one knows what the situation is like in these more rural and remote places, and it's going to be some time before we have a full picture.

This sort of disaster is unprecedented in the Philippines. The effect is something like a massive earthquake followed by huge floods.

Our initial focus will be on the province of Leyte, which was hit first as the typhoon came ashore. We know that many medical facilities have been destroyed or damaged, with medical equipment simply washed away. On top of this, a lot of health staff are unaccounted for, meaning the resources are severely depleted.

Injured people have converged on the airport, where the Philippines military is providing medical care. But they're under intense pressure, particularly for drugs and supplies, so we will set up a medical team there to support them. People are bringing the injured to the airport from the town by motorbike or on foot; it's a six-hour walk.

For sure, there are wounded people who have not yet received medical attention. Usually, in these types of disasters, the main needs are related to people being displaced from their homes, and the injuries are relatively minor, cuts, broken bones, head wounds. But with so many houses and buildings having collapsed because of the strong winds, we're expecting to see some significant injuries.

Tetanus infection is also a major hazard. From our experience with the Aceh tsunami and other disasters, people are driven to search in the wreckage of their homes, and they get cuts which rapidly become infected. So vaccination against tetanus is vital.

Our priority is to address the urgent and immediate medical needs, of which we are sure there are many. After that, really it's everything - shelter, water, food. they've lost everything.

We've heard reports that people are walking around aimlessly, completely desperate. The mental health needs are going to be huge; our team will be joined by a psychologist in the next few days.

At this early stage, the big issue for us is moving people and aid supplies to the affected area. Tacloban itself has limited capacity for flights, but we are doing our best to get our teams up and running.

As we are able to get more staff into the disaster areas, our strategy will be to move outwards from Tacloban town to the surrounding region and islands. We think that Eastern Samar is probably the next priority for us to tackle. That will mean using a helicopter to assess the more rural areas and then speed boats and barges to visit, treat and potentially supply the coastline populations through mobile teams.

As a Filipino, I know that we're a resilient people. we've been battered over and over again by natural disasters. So when I hear about people being so desperate, so stunned, so hopeless, it really tells me just how bad this is."

In the aftermath of the devastation from Super Typhoon Haiyan/Yolanda, one of the worst storms on record, the Registered Nurse Response Network (RNRN), a project of National Nurses United, has put out a call for volunteers and donations through its vast network of direct-care nurses both nationally and internationally.

Following a request sent out this weekend from RNRN, within five hours, 370 RNs had already signed up to help.

RNRN has been gathering information and assessments from multiple sources, including the Philippines Alliance of Health Workers, a member of NNU's international affiliate Global Nurses United, to determine the need for nurses, medical supplies and financial support on the ground.

Through the disaster relief effort, RNRN have mobilized hundreds of direct care RN volunteers to help provide care to people affected by other disasters in the U.S. and internationally, including Hurricanes Katrina and Sandy, the Haiti earthquake, and South Asia tsunami on the ground and on U.S. naval ships.

For this effort, RNRN is placing a special effort on recruiting volunteers who speak Tagalog, many of whom are directly connected to NNU and RNRN. RNs have been asked to provide their availability over the next month.

The nurses are also seeking public support with financial donations to help their relief effort.

Secure donations may be made here.

Contributions are tax deductible, and 100 percent of all donations go directly to the relief effort.

In the Philippines, communication channels are not yet re-established to many areas, but current reports indicate as many as 10,000 deaths, with fears of many more casualties yet to be assessed.

Several hospitals, along with thousands of homes and schools have been damaged or destroyed, and hundreds of thousands left homeless - many with long term shelter needs.

"As U.S. nurses we have seen the effects of deadly storms and disasters and the pain it causes for our families and communities, said Zenei Cortez, RN, vice president of National Nurses United. "We know the difference it makes to provide support and assistance in a hour of need. We will do whatever we can to aid our sisters and brothers in the Philippines."

RNs can volunteer for the relief effort on the NNU website here.

RNRN, a project of National Nurses United, the nation's largest organization of RNs, was formed in 2004 in the aftermath of the South Asia tsunami in 2004, when the need for nurses was not being met by traditional disaster relief organizations. Since that time RNRN has send hundreds of direct-care nurse volunteers to assist following Hurricane Katrina, the massive earthquake in Haiti, and Hurricane Sandy.