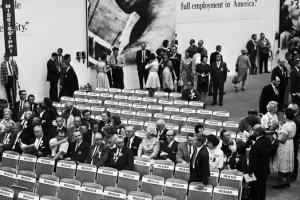 Young volunteers spent the summer of 1964 in Mississippi, working to register African-American voters. But leaders of the movement also had a political strategy designed to chip away at the oppressive white power structure in the South, and it was put to the test at the Democratic National Convention in Atlantic City, N.J.
Subscribe to 1964 DNC