ProPublica has obtained a vast cache of IRS information showing how billionaires like Jeff Bezos, Elon Musk and Warren Buffett pay little in income tax compared to their massive wealth — sometimes, even nothing. 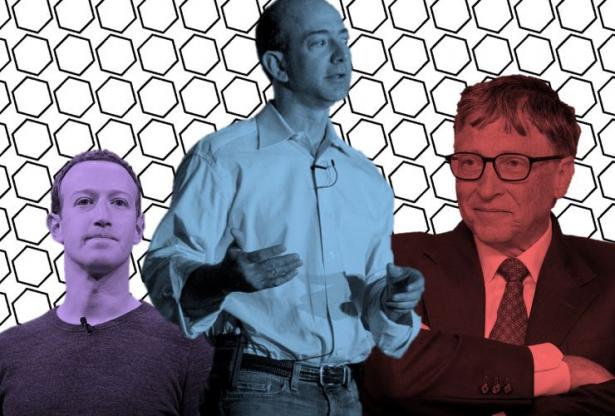 Michael Bloomberg managed to do the same in recent years. Billionaire investor Carl Icahn did it twice. George Soros paid no federal income tax three years in a row.

Share this article on
ProPublica has obtained a vast trove of Internal Revenue Service data on the tax returns of thousands of the nation’s wealthiest people, covering more than 15 years. The data provides an unprecedented look inside the financial lives of America’s titans, including Warren Buffett, Bill Gates, Rupert Murdoch and Mark Zuckerberg. It shows not just their income and taxes, but also their investments, stock trades, gambling winnings and even the results of audits.

Taken together, it demolishes the cornerstone myth of the American tax system: that everyone pays their fair share and the richest Americans pay the most. The IRS records show that the wealthiest can — perfectly legally — pay income taxes that are only a tiny fraction of the hundreds of millions, if not billions, their fortunes grow each year.

Many Americans live paycheck to paycheck, amassing little wealth and paying the federal government a percentage of their income that rises if they earn more. In recent years, the median American household earned about $70,000 annually and paid 14% in federal taxes. The highest income tax rate, 37%, kicked in this year, for couples, on earnings above $628,300.

The confidential tax records obtained by ProPublica show that the ultrarich effectively sidestep this system.

America’s billionaires avail themselves of tax-avoidance strategies beyond the reach of ordinary people. Their wealth derives from the skyrocketing value of their assets, like stock and property. Those gains are not defined by U.S. laws as taxable income unless and until the billionaires sell.

To capture the financial reality of the richest Americans, ProPublica undertook an analysis that has never been done before. We compared how much in taxes the 25 richest Americans paid each year to how much Forbes estimated their wealth grew in that same time period.

We’re going to call this their true tax rate.

The results are stark. According to Forbes, those 25 people saw their worth rise a collective $401 billion from 2014 to 2018. They paid a total of $13.6 billion in federal income taxes in those five years, the IRS data shows. That’s a staggering sum, but it amounts to a true tax rate of only 3.4%.

It’s a completely different picture for middle-class Americans, for example, wage earners in their early 40s who have amassed a typical amount of wealth for people their age. From 2014 to 2018, such households saw their net worth expand by about $65,000 after taxes on average, mostly due to the rise in value of their homes. But because the vast bulk of their earnings were salaries, their tax bills were almost as much, nearly $62,000, over that five-year period.

No one among the 25 wealthiest avoided as much tax as Buffett, the grandfatherly centibillionaire. That’s perhaps surprising, given his public stance as an advocate of higher taxes for the rich. According to Forbes, his riches rose $24.3 billion between 2014 and 2018. Over those years, the data shows, Buffett reported paying $23.7 million in taxes.

In the coming months, ProPublica will use the IRS data we have obtained to explore in detail how the ultrawealthy avoid taxes, exploit loopholes and escape scrutiny from federal auditors.

Experts have long understood the broad outlines of how little the wealthy are taxed in the United States, and many lay people have long suspected the same thing.

But few specifics about individuals ever emerge in public. Tax information is among the most zealously guarded secrets in the federal government. ProPublica has decided to reveal individual tax information of some of the wealthiest Americans because it is only by seeing specifics that the public can understand the realities of the country’s tax system.

Consider Bezos’ 2007, one of the years he paid zero in federal income taxes. Amazon’s stock more than doubled. Bezos’ fortune leapt $3.8 billion, according to Forbes, whose wealth estimates are widely cited. How did a person enjoying that sort of wealth explosion end up paying no income tax?

In that year, Bezos, who filed his taxes jointly with his then-wife, MacKenzie Scott, reported a paltry (for him) $46 million in income, largely from interest and dividend payments on outside investments. He was able to offset every penny he earned with losses from side investments and various deductions, like interest expenses on debts and the vague catchall category of “other expenses.”

In 2011, a year in which his wealth held roughly steady at $18 billion, Bezos filed a tax return reporting he lost money — his income that year was more than offset by investment losses. What’s more, because, according to the tax law, he made so little, he even claimed and received a $4,000 tax credit for his children.

His tax avoidance is even more striking if you examine 2006 to 2018, a period for which ProPublica has complete data. Bezos’ wealth increased by $127 billion, according to Forbes, but he reported a total of $6.5 billion in income. The $1.4 billion he paid in personal federal taxes is a massive number — yet it amounts to a 1.1% true tax rate on the rise in his fortune.

While Bezos’ wealth has grown astronomically over the last decade and he’s paid a minuscule fraction of it in taxes, a typical American household paid more in taxes than it accumulated in wealth. (Graph)

The revelations provided by the IRS data come at a crucial moment. Wealth inequality has become one of the defining issues of our age. The president and Congress are considering the most ambitious tax increases in decades on those with high incomes. But the American tax conversation has been dominated by debate over incremental changes, such as whether the top tax rate should be 39.6% rather than 37%.

ProPublica’s data shows that while some wealthy Americans, such as hedge fund managers, would pay more taxes under the current Biden administration proposals, the vast majority of the top 25 would see little change.

The tax data was provided to ProPublica after we published a series of articles scrutinizing the IRS. The articles exposed how years of budget cuts have hobbled the agency’s ability to enforce the law and how the largest corporations and the rich have benefited from the IRS’ weakness. They also showed how people in poor regions are now more likely to be audited than those in affluent areas.

ProPublica is not disclosing how it obtained the data, which was given to us in raw form, with no conditions or conclusions. ProPublica reporters spent months processing and analyzing the material to transform it into a usable database.

We then verified the information by comparing elements of it with dozens of already public tax details (in court documents, politicians’ financial disclosures and news stories) as well as by vetting it with individuals whose tax information is contained in the trove. Every person whose tax information is described in this story was asked to comment. Those who responded, including Buffett, Bloomberg and Icahn, all said they had paid the taxes they owed.

A spokesman for Soros said in a statement: “Between 2016 and 2018 George Soros lost money on his investments, therefore he did not owe federal income taxes in those years. Mr. Soros has long supported higher taxes for wealthy Americans.” Personal and corporate representatives of Bezos declined to receive detailed questions about the matter. ProPublica attempted to reach Scott through her divorce attorney, a personal representative and family members; she did not respond. Musk responded to an initial query with a lone punctuation mark: “?” After we sent detailed questions to him, he did not reply.

One of the billionaires mentioned in this article objected, arguing that publishing personal tax information is a violation of privacy. We have concluded that the public interest in knowing this information at this pivotal moment outweighs that legitimate concern.

The consequences of allowing the most prosperous to game the tax system have been profound. Federal budgets, apart from military spending, have been constrained for decades. Roads and bridges have crumbled, social services have withered and the solvency of Social Security and Medicare is perpetually in question.

There is an even more fundamental issue than which programs get funded or not: Taxes are a kind of collective sacrifice. No one loves giving their hard-earned money to the government. But the system works only as long as it’s perceived to be fair.

Our analysis of tax data for the 25 richest Americans quantifies just how unfair the system has become.

For comparison, it would take 14.3 million ordinary American wage earners put together to equal that same amount of wealth.

The bill for the wage earners: $143 billion.

To continue reading this article go to : The Secret IRS Files: How the Wealthiest Avoid Taxes