When a place is controlled by a government in which it has no representation, it will be abused. 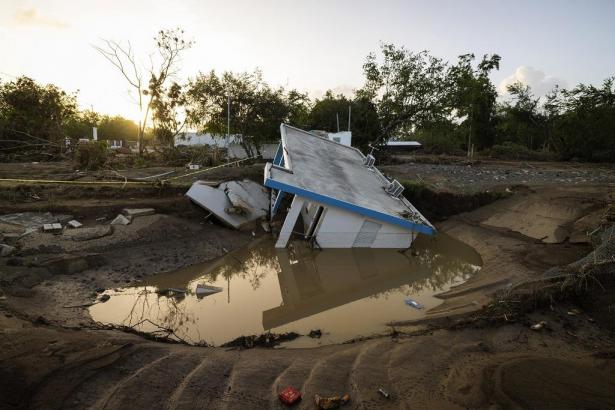 View of a house that was washed away by Hurricane Fiona at Villa Esperanza in Salinas, Puerto Rico, September 21, 2022.,Alejandro Granadillo/AP Photo

Puerto Rico is reeling from a devastating hurricane, again. Fiona was far weaker than Hurricane Maria in 2017—the damage from which has still not been fully repaired five years later—and Fiona’s core did not directly strike the center of the island. But its slow speed meant torrential rain that knocked out the entire power grid and left about a third of Puerto Ricans without drinking water. Four days later, rescue efforts were still struggling to reach people stranded by washed-out roads and bridges.

There are many proximate factors behind Puerto Rico’s continued vulnerability to hurricanes and economic dysfunction. But the root problem is political inequality. It is an American colony: controlled by the United States government, but without any political representation for the people living there. Until this inequality is rectified, it’s a safe bet that Puerto Rico will never fully recover.

The most immediate infrastructure issue on Puerto Rico is the electrical grid. Even before 2017, the system was aging and battered, reliant on polluting heavy oil generators whose fuel had to be imported at great expense. Maria virtually shredded the whole thing to ribbons. This damage, and chronic corruption at the state-owned power utility, prompted the island’s government and the oversight board appointed by Congress (more on this later) to privatize the grid in 2021, selling control to a Canadian-American consortium called LUMA Energy.

Unsurprisingly, this did not work. Not only did the grid fail spectacularly during the recent hurricane, it suffered worsening power failures immediately after privatization, including a widespread blackout in April this year while weather was calm. In November last year, a judge issued an arrest warrant for LUMA’s CEO for failing to provide documents to local lawmakers (though it was later rescinded).

Meanwhile, as Kate Aronoff points out at The New Republic, only a tiny fraction of the $13.2 billion FEMA has allocated for grid repair and modernization after Maria has been disbursed and spent. While frustrated Puerto Ricans have been setting up rooftop solar panels by the thousands—which worked exceedingly well during the recent hurricane—utility-scale renewable investment has been sparse. As of mid-2022, the island got 95 percent of its electricity from fossil fuels, mainly oil and natural gas. The capital of San Juan has come to rely on liquefied natural gas delivered through a privately owned terminal.

Incidentally, one might think that wind turbines would be knocked down by hurricanes, but older designs have stood up to Category 4 winds, and new designs should be nearly hurricane-proof. The major vulnerability is the grid itself, especially aboveground power lines.

The broader context here is that Puerto Rico has been in dire economic straits for more than a decade. In earlier decades, Congress granted it various tax exemptions that made its debt exceptionally attractive for investors and prompted the island government to borrow heavily, but removed those provisions in 2006—just in time for the Great Recession. The resulting debt crisis was “resolved” with a law called PROMESA, signed by President Obama in 2016, that put Puerto Rico under a de facto dictatorship of technocrats. (That’s the board mentioned earlier; locals call it “La Junta.”) This board set up a partial debt restructuring plan coupled to a requirement for Greece-style massive austerity and privatization, which only deepened the economic crisis, and further fueled migration to the mainland.

Until this inequality is rectified, it’s a safe bet that Puerto Rico will never fully recover.

This policy bungling, mostly the fault of the federal government, is why Puerto Rico has not grown economically in more than 20 years.

The situation in Puerto Rico is crying out for a fundamental restructuring of its relationship with the mainland. It needed a massive debt write-off, the removal of anachronistic trade rules, and a reconstruction package to move its energy sources toward renewables and strengthen its grid against storms. (It is insane for a sunny Caribbean island to burn so much expensive imported oil, gas, and coal.) It would also benefit from granting full welfare rights to its citizens—currently Puerto Ricans receive less in Medicaid than mainlanders and are ineligible for Supplemental Security Income, even though they pay payroll taxes. All this could repressurize the economy, get growth going again, and stop the loss of population.

But so long as Puerto Rico remains a colony, that solution is nearly impossible to imagine. If the island had senators and representatives, they could demand action by leveraging their votes in Congress—especially when control is so closely divided between the parties, as it is today and is likely to remain. It’s not a coincidence that no actual American state has ever been jerked around by the federal government like this.

Now, statehood is controversial on the island. The most recent vote in 2020 found a clear majority in favor, though not a huge one, at 53 percent in favor to 47 percent against.

I can understand why Puerto Ricans might be suspicious about joining up with a government that has treated them so badly over the years. But the most realistic prospect of prying the help the island deserves out of that government is to send its own voting members to Congress where they can wield real power. The current commonwealth status is plainly not working; formal independence would not solve the economic crisis, and would still leave the island (like all small nations close to large, rich ones) subject to American economic domination.

Congressional Democrats, meanwhile, have every reason to create a new state that would likely tend to favor their party—though it wouldn’t be a liberal lock, as Puerto Ricans are more conservative than is commonly supposed. But partisan politics aside, the existence of any colony is an egregious violation of basic principles of democracy, regardless of how it might vote. There should be no taxation without representation.

[Ryan Cooper is the Prospect’s managing editor, and author of ‘How Are You Going to Pay for That?: Smart Answers to the Dumbest Question in Politics.’ He was previously a national correspondent for The Week.]