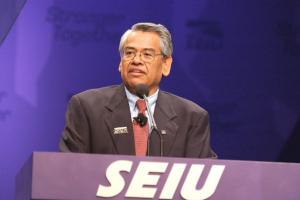 Eliseo Medina made a big mistake in tacitly backing SEIU’s raid on its longtime ally and the nation’s most progressive union, Unite HERE. Some believe that and his support for the SEIU- UHW takeover forever tarnished his legacy. But in the big picture Eliseo Medina did as much to advance social and economic justice as anyone of his time. His career was marked by extraordinary dedication to working people, and he never stopped believing in the power of “Si Se Puede”!
Subscribe to Andy Stern SEIU-UHW